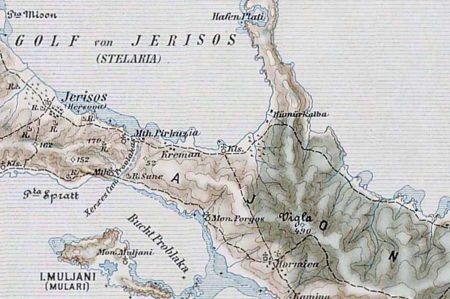 Our investigations on the peninsula of Chalkidiki had inevitably led us to the historical background of the campaigns of Xerxes, who as Achaemenid Great King and Egyptian Pharaoh reigned the vast Persian Empire between 486-465 BC.

Herodotus already described in its history about the Persian Wars, that under Darius I serving Persian commander Mardonius in his campaign against Thrace and Macedonia in 492 BC, had lost a large part of their fleet during the circumnavigation of Mount Athos in a storm. After the punitive expedition of Darius against Greece had failed in the battle at Marathon in 490 BC, Xerxes later realized the idea of a further campaign against the Greeks.

Xerxes was born as the son of that mentioned Persian king Darius I and Atossa, daughter of Cyrus II. in around 519 BC. In 486 BC he entered as a great king to succeed his father, even though he had three older brothers from the marriage of a daughter of Darius Gobryas. At the beginning of his reign, Xerxes successfully fought uprisings in Egypt, which tried to get independent under Psammetich IV. After Persia and Babylonia, he was turning to Greece in 483.

When preparing a campaign against the Greeks, Xerxes I. prompted the construction of a canal through the Isthmus of Athos to avoid a repetition of the catastrophe of his father or of the commander. Construction work under Bubares and Artachaies lasted nearly three years. The workers were forcibly recruited from various nations and from the vicinity of Mount Athos. First they started with the channel works along a line drawn across the Isthmus line by digging which was promoted by the workers at the grave sole in a sort of bucket brigade to other workers upwards. Since initially almost vertical slopes were built, the soil frequently slid, so that the excavation had to start over again. First the Phoenicians used the right method by starting the excavation at twice the width of the channel and could be successful with increasing depth. The width of 30 m was chosen to facilitate the crossing of two Triremes boats adjacent.

The channel led to the Isthmus of the Athos peninsula immediately east of the present town of Nea Roda from the Gulf of Ierissos in the north to the Golf Singiti just west of the village Trypiti. He parted with it (the third "finger") from the rest of Chalkidiki from the Athos peninsula. The channel had a length of about 2.200 meters and a width of about 30 meters. Herodotus said later that Xerxes rather wanted to demonstrate his power and size and to erect a monument to the sewer then doing canal construction, as his ships could have being moved on land as well. But as so often in history, there were ambitions probably from both directions. And similar ideas of other rulers should follow: the Pliny channel.

Another major project under the campaign against the Greeks were the pontoon bridges across the Hellespont. An anecdote reports that Xerxes punish the strait with 300 lashes at the failed bridge over the Dardanelles. He wanted to punish Poseidon that his bridges were destroyed shortly after the construction due to a storm.

After initial successes at Thermopylae fights, Leonidas suffered his multiethnic army, which is estimated to a maximum of 100,000 soldiers by historians in the naval battle of Salamis against the run of Themistocles Greek fleet a decisive defeat. The assumption of 100,000 soldiers as army strength is probably a traditional mistake, because in the quotas also assistants, workers, other persons and even entire populations were taken into account.

Xerxes retreated back in his capital Susa after the defeat at Salamis and followed the defeat of his land army at Plataea only from a distance, but no longer picked himself at action. Since Xerxes - unlike his ancestors - never led a sword in battle, he was responsible for warfare capable strategists who were equipped with sufficient experience, such as Mardonius, which he entrusted the land army in fighting against Greece, or his half-brother Achaemenes against the uprising in Egypt in 484 BC.

Contemporary historians and authors, such as the Greek poet Aeschylus, attributed the failure of Xerxes, among other things to its lack of prudence and lack of religious tolerance, their causes according to current estimates probably were his mother Atossa, the influence and the strengthening of the magician. On his way to Greece, Xerxes I. let halt in Troy and receives reports from the Trojan War. Then, he should have been offered 1000 cattle victims - in strict contrast to the teachings of Zoroaster.

Today the channel is silted up, its location on the ground is barely, but still clearly visible on satellite imagery. Investigations by British and Greek archaeologists and geophysicists in the years between 1991 to 2001 provided evidence of the actual existence of the channel, which had been called into question long. The channel has been thus completed, but probably no longer used after the campaign and therefore fell soon after.

The imposing Rotunda in Thessalonica