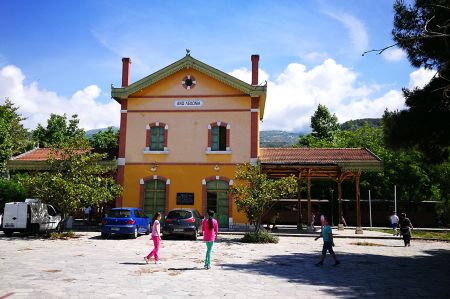 As one of the attractions in the region around Volos, there is so-called Pilion railway, which with a track width of only 600 mm belongs to the really attractive Narrow Gauge Railway, and because of that certainly is more like a model railway in big seize. But more about that later.

We had moved from our location at the Campsite Sikia at Pilion in the direction of Volos when we came across the siggn guiding to an ancient building. We followed the signs on meandering, narrow streets, which were surrounded by olive trees to the left and right. We know that there are a lot of ancient sites in the region that we will gradually explore, but this will happen during the next visit. We first followed the signs and, after a few kilometers, came upon the ancient but very dilapidated tower to seen in the pictures, which appears to be from Byzantine times. Unfortunately, there was no further information, so we decided to ask for it in the near future. Next to it was a small, ancient, white-washed chapel, which had been particularly attractive to us. Sorry, no further information too.

So it was obvious that we should turn to the Pilion train, which would lead us to Ano Lechonia, where there would be more detailed information on the Pilion railway. The construction work on this section of the Thessaly railways began in 1886. The first section of Volos-Agria was completed in 1892. In 1896 the route reached Ano Lechonia. In 1904 the work on the last section was completed until Milies, and from then on, the route connected the mountain villages in the heart of the Pilion peninsula with the harbor town of Volos.

The entire railway is built in single track with evacuations in all stations and stops outside Volos. The section of the route within Volos was designed as a quadruple track, allowing trains from Larissa (normal track) and Kalambaka (meter widths track) to the stop Vlachava on the outskirts of Volos.

Water cranes were installed in Agria, Ano Lechonia (still present) and Milies. Turntables for turning the train are available in Volos and Milies, the latter was replaced by a larger one after the Schomma locomotives were procured. In Agria and Ano Lechonia, there is a track triangle for the locomotive.

Until the 1950s, the Narrow Gauge RailwayRelaxing boat trip on the spring lake at Sveti Naum between the stations Volos main train station and Anavros also served as a tram. In 1951, the "Greek State Railroad (SEK)" took over the operation of the route.

Following the dissolution of the SEK on 31 December 1970 the management of the line went over to the newly established "Greek Railroad Organization OSE". The railway line was immediately shut down for economic reasons, but not removed. Parts of the route were asphalted over the following years, for example, the voyage routes of Volos (Dimitriados road) and Lechonia, and those sections of the intercourse between Agria and Ano Lechonia, where the route runs directly along the coast road. Trailers for people and loads were left on site.

In 1985, the railway was put under monument protection and the mountain route from Ano Lechonia to Milies was reactivated by the "Association of Greek Railroad Friends". Since 1996 this section has been regularly visited by tourists. In the summer months the train runs every Saturday and Sunday, from Ano Lechonia in the morning, back in the afternoon from Milies, which unfortunately we had chosen the wrong time of our exploration. However, our conversation partner gave the advice to take the train to Milies, and then hike the way back to the campsite. A good idea that we will implement in early July.

Since 1999, two new Schöma diesel locomotives have been available for the historical trains, which were designed as "steam locomotives". The only remaining operational steam locomotive is used for interested groups on demand from Ano Lechonia.

Relaxing boat trip on the spring lake of Sveti Naum

Volos - city tour through the harbour town of the Argonauts