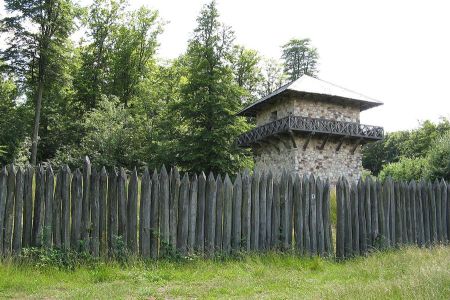 When the term "Limes" is mentioned, almost everyone immediately thinks of the Roman defense system that ran from the Rhine to the Danube and represented the border between the Roman Empire and the "Free Germania", perhaps also of Hadrian's Wall, which separated England and Scotland.

We are less aware that a long border line in the east of the empire had to be defended against the Parthians and Sassanids, a border that was perhaps even more important than the Germanic Limes. And yet: There was an extensive and strongly secured limes (border) from the Trabzon (Trapezunt) on the Black Sea over the Pontic Taurus (Zigana Pass) to the upper reaches of the Euphrates, then largely using the course of the river down to the Syrian lowlands under inclusion the important oasis city and residence Palmyra and across the Syrian desert until it finally reached the Red Sea at Aqaba. 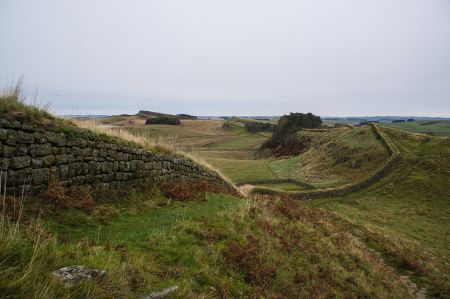 This eastern border security is still occupied today by numerous fortifications, be it auxiliary forts or watchtowers, be it bridges or road sections, especially in the area of ​​today's Syria. But in Turkey too, there are still some remains to be explored or to be marveled at in museums, because much, such as the legionary camps of Samosata or Zeugma with the associated settlements, has been flooded by the various reservoirs of the Euphrates and has been lost forever.

However, one should not imagine this Limes as a closed border fortification like the Limes in Germany, because the Euphrates itself was to be regarded as a border in parts due to the conspicuous topography. On the other hand, the mountainous terrain prevented a closed demarcation.

The Euphrates-Limes, the Roman border against the Parthians and Sassanids

With its fords and bridges, the central reaches of the Euphrates had always played the role of a geographically particularly favorable transition between east and west. The trade routes, on which of course also the cultural exchange took place, ran here far beyond antiquity.

With the entry of the Romans into the history of Asia Minor, especially through the inheritance of the Pergamene Empire after the death of Attalus ’III. in 133 BC. and the further expansion to the east, the Euphrates gained great importance as a frontier, especially after Pompey established the province of Syria.

The relocation of the legions under Augustus and Tiberius 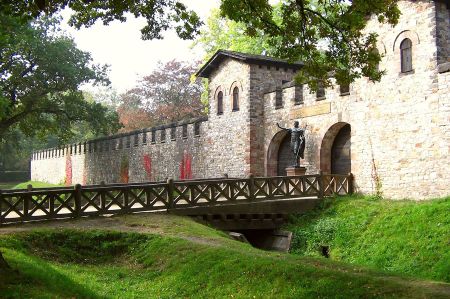 63 BC Pompey had brought the Seleucid Diadochian state as the province of Syria under Roman rule. A legion was moved to Zeugma, the capital of the client state Commagene. At the time of the late Roman republic, the area of ​​the central Euphrates became the border between Rome and its eastern neighbors, especially the Parthians, with whom Rome lived in constant enmity and against whom the Romans waged numerous wars, some of which were costly. The relocation of the legions under Augustus and Tiberius to the Euphrates line near Zeugma after the restoration of the province of Syria served as protection against the Parthians; they themselves had no further expansion plans. Under Nero, who waged war against the Armenians in the north, the border line was expanded and secured by military posts and smaller forts. Finally, under the emperor Vespasian, the Roman client state of Commagene was finally annexed in AD 72 and added to the province of Syria. This meant that the important Euphrates crossing at Samosata was firmly in Roman hands, where a legion was also stationed. With the construction of a connecting road to Zeugma, further forts were built, which together with the legionary camps located in Zeugma and Raphanaea formed a strong defensive border. The threat to the eastern border from the Parthians only ended with the conquest of Mesopotamia by Emperor Marc Aurel and the associated relocation of the Roman eastern border to the east. This process was completed under his successors, most notably Septimius Severus.

The demarcation of the border on the Euphrates lost its strategic importance. With the strengthening of the Persian Sassanid Empire in

In the 2nd and 3rd centuries AD, however, the Euphrates line regained importance as a line of retreat.

At the end of the 3rd century, the Sassanids ousted the Parthian great power and pressed the Roman eastern borders in several offensives. For example, the Romans lost Duro Europos and Zeugma to the Persian invaders in 256 AD, who completely destroyed Zeugma. The climax of the conflict marked the capture of Emperor Valerian by the Persian King Shapur I in AD 260. The rise of the desert city of Palmyra also fell during this period. (see below) 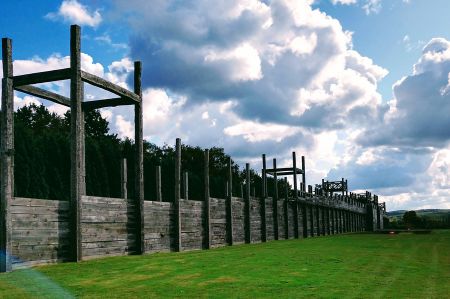 To date, none of the forts mentioned in ancient literature has been archaeologically excavated. The development of the border in Cappadocia can be inferred more precisely on the basis of historical considerations and topographical conditions.

The course of the old Roman road between Samosata and Zeugma and over to Melitene, today's Malatya, is mainly traceable through the bridges and road sections that have been preserved or can only be guessed at. The road from Samosata to the south was built very close to the banks of the Euphrates for logistical reasons, so that, for example, a tunnel had to be cut through the rock on the steep slope in front of Zeugma, which can still be seen today. Ancient milestones date the start of construction to the time before the Flavian emperors, but the road network was significantly expanded under the Severans in the 2nd century AD.

In addition to the military-strategic importance of the Euphrates line, this region, as a transit country between the mountainous landscapes of Armenia to the Caucasus in the north and the desert regions down to Arabia in the south, was predestined for a lively exchange of goods and cultural exchange between east and west.

In the context of the Roman expansion in Asia Minor, the Euphrates border was of particular importance in another respect. To the west of this line, the territorial reorganization under Pompey and Augustus began a great upswing in the Hellenistic cities, which from the Roman point of view was an important factor of order. As a result of the systematic Romanization, Asia Minor becomes a unified cultural structure. The development of the Greek cities east of the Euphrates, however, is quite different. If the Parthians still respected and respected Greek culture, the rise of the Sassanids, a Persian dynasty whose cultural ideas and inheritance were shaped quite differently, began a continuous decline of Greek-Hellenistic culture. The cities lost their state-supporting function, instead a strictly centralized feudal structure characterized the social and political structure of the new great power.

Zeugma (today: Belkis) was obviously the most important crossing 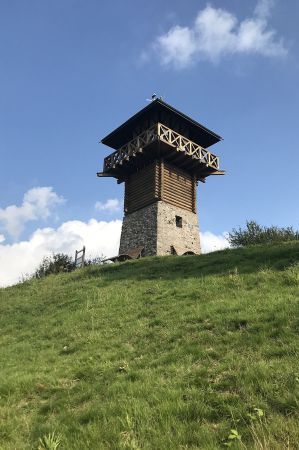 At the beginning of the 3rd century, the border between the Tigris and Euphrates developed into a cultural border. From a western point of view, the Euphrates with its fords in the middle reaches still kept a central one function as a mediator between the Romanized West and the different types of Eastern cultures, as there was also direct access to the Mediterranean ports.

Zeugma on the Euphrates (today: Belkis) was obviously the most important crossing over the river in the Roman Empire. Here and near Samosata in the north were the central legionary camps from which the marches against the Parthians and Sassanids were prepared. Thus, under the protection of the Roman military, trade was able to develop geographically broadly. Caravan centers emerged behind the border fortifications, for example in Antioch on the Orontes, in Palmyra, in Damascus and Gerasa. The central north-south axis ran through the Nabataean capital Petra to southern Arabia.

The rise of the Palmyra desert oasis in particular marks a milestone in the economic and political development under the protection of the Syrian Limes. Under Diocletian, a Roman legion was stationed in Palmyra after the oasis had already received the status of a “civitas libera” under the emperor Hadrian, all signs that Palmyra had become the center of profitable oriental trade in Roman times.

“For centuries, the area of ​​the central Euphrates has been of eminent military and economic importance for the Orient and Occident. Yes, it can be said that this region with its numerous river crossings was not only the most accessible but also the only real zone of contact between the Roman-Byzantine and the Parthian-Sassanid world. "

Excavations were carried out with the construction of the Birecik Dam 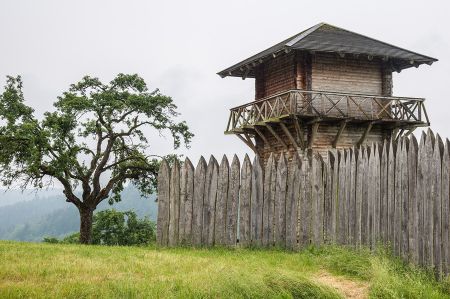 Samosata and Zeugma, the two legionary camps on the territory of today's Turkey, unfortunately flooded by the dammed Euphrates, have very different historical backgrounds. Even before the legionary camp was established, Samosata had an urban settlement, which is documented by inscriptions. Even in pre-Roman times, Zeugma was important as a transit station for military advances because of its strategically favorable location at the most important Euphrates crossing, directly on the border between Rome and the Parthian Empire. The place itself did not develop until the Roman Empire. It is known to us today because emergency excavations were carried out with the construction of the Birecik Dam in the Roman settlement and an incredible treasure trove of mosaics was discovered in the Roman villas, which were recovered in the years after 1992 and today in a specially built modern museum in Gaziantep, which opened in 2011. It is the second largest collection of mosaics in the world after the one in the Museum of Tunis. (See article about the mosaics by Zeugma).

Submerged in the floods of the Euphrates: Zeugma