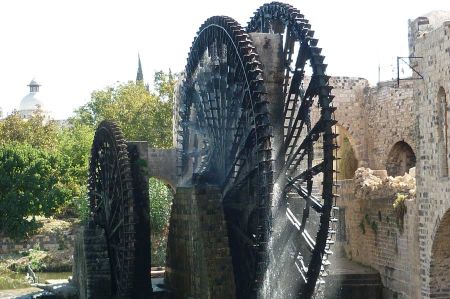 Water wheels are known from many countries around the world, which use the flowing water as an ecological source of energy to operate machines or devices such as grain mills or sawmills, in which the water power sets a wheel in rotation and the rotational energy is then transmitted to the machines via belt drives.

However, the principle of water wheels is also used, e.g. B. to overcome height differences in the water flow, which are used for irrigation or drainage of cultivated areas or even cities. Often also known as scoop wheels, these water wheels could be found almost anywhere in the world until the invention of electrically operated pumps.

Since when exactly the technology of the water wheels has been known, or who actually invented them, it will probably no longer be possible to determine. However, it is known that 2300 years ago the Romans, with their excellent hydraulic engineering technology, also deliberately used water wheels on the Orontes River to supply their partially newly built cities. For some experts, these water wheels, some of which are still in operation today, are therefore the oldest machines in human history. What is special about these water wheels on the Orontes, which are still working today, is their oversized size, which is why they are almost called marvels of technology. Some with a diameter of more than 20 meters, they drew water from the river Orontes, lifted this water to a level up to 30 meters higher and were only driven by the flow of the current in the river. 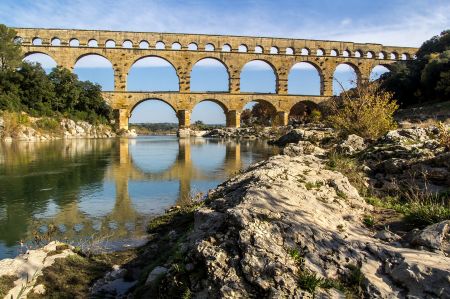 We have already reported several times on the imposing hydraulic engineering works of the Romans, e.g. of the viaducts, some of which are still functioning today in some countries, including the well-known aqueduct "Pont du Gard" near Nimes in southern France. But there is also an impressive aqueduct near Selcuk in Turkey. So what could be more obvious than building a newly founded city a little higher above the riverbed to be safe from flooding at all times. This was only possible if you could lift water. Because the Romans in particular used the flowing water not only to supply the city with fresh water, but also to dispose of gray water. 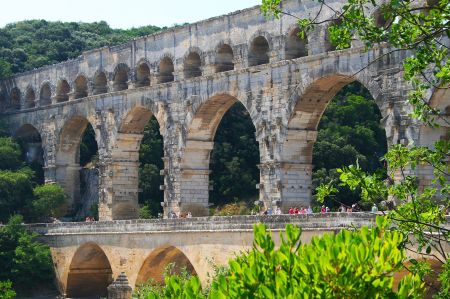 Admittedly, the trip to Hama in Syria is currently not possible without a certain risk, but there you can only see the huge water wheels that were once built by the Romans and have been renewed, supplemented and repaired again and again over the centuries. It was initially the Byzantines who adopted and continued this technology, and then it was the new ethnic groups who settled in the region and continued to use the water wheels by replacing and maintaining them. Despite all the unrest, people in Syria are well aware of the long history of Hama's water wheels, and they are protected accordingly. Called Norias by the Syrians, the water wheels of Hama can be heard from afar simply because of their squeaking, grinding noise. No wonder, because the Romans were gifted hydraulic engineers, but they didn't know ball bearings for noise reduction. So who is surprised when the huge wheels covered with moss, all of which run on wooden axles mounted in stones, cause a constant creaking or whine, which is caused by the size of the moving masses alone. The sound alone will stay in your head forever, not to mention the imposing appearance.

Fresh Water for the city of Hama 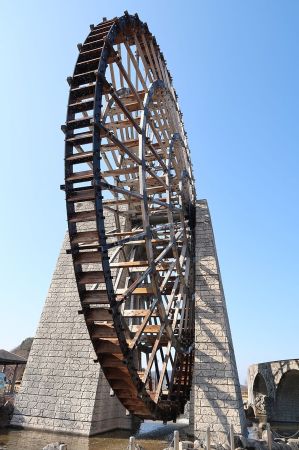 Today, the water of the Orontes is no longer used to supply the city of Hama with fresh water, but the huge water wheels supply the farmer's estates and fields via the partially intact Roman waterways, which would simply wither without water. Of course, the whole "machine water wheel" is not a perfect example of modern machine technology, because it is wet everywhere and you get showered as you approach it, but what does it matter if the dripping water goes back into the river and no electrical energy is wasted. A, let's just say, almost perfect construction, these Norias.

Today there are about 100 of these water wheels along the Orontes, of which only 17 are still in operation and, except for the period when the water of the Orontes is dammed to fill the Homs dam, at least these 17 Norias are still running. Similar water wheels, albeit much smaller, can also be found along the Göksu River, which flows into the sea at Silifke.

The legendary Xerxes Canal of Chalkidiki