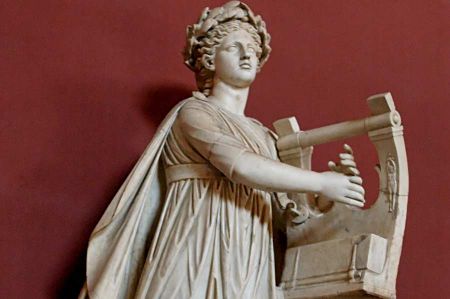 In Greek and Roman mythology, Apollo is one of the most important and diverse of the Olympian deities. Apollo has been variously recognized as a god of light and the sun; truth and prophecy; archery; medicine, healing and plague; music, poetry, and the arts; and more.

Apollo is the son of Zeus and Leto, and has a twin sister, the chaste huntress Artemis.

Apollo is known in Greek-influenced Etruscan mythology as Apulu. Apollo was worshiped in both ancient Greek and Roman religion, as well as in the modern Greco–Roman Neopaganism.

As the patron of Delphi (Pythian Apollo), Apollo was an oracular god—the prophetic deity of the Delphic Oracle. Medicine and healing were associated with Apollo, whether through the god himself or mediated through his son Asclepius, yet Apollo was also seen as a god who could bring ill-health and deadly plague as well as one who had the ability to cure. Amongst the god's custodial charges, Apollo became associated with dominion over colonists, and as the patron defender of herds and flocks. As the leader of the Muses (Apollon Musagetes) and director of their choir, Apollo functioned as the patron god of music and poetry. Hermes created the lyre for him, and the instrument became a common attribute of Apollo. Hymns sung to Apollo were called paeans..

The etymology of Apollo is uncertain. Several instances of popular etymology are attested from ancient authors. Hesychius connects the name Apollo with the Doric ape??a, which means "assembly", so that Apollo would be the god of political life, and he also gives the explanation "fold", in which case Apollo would be the god of flocks and herds. It is also possible  that apellai derives from an old form of Apollo which can be equated with Appaliunas, an Anatolian god whose name possibly means "father lion" or "father light". The Greeks later associated Apollo's name with the Greek verb apollymi meaning "to destroy".

In modern times it has been suggested that Apollo comes from the Hurrian and Hittite divinity, Aplu, who was widely invoked during the "plague years". Aplu, it is suggested, comes from the Akkadian Aplu Enlil, meaning "the son of Enlil", a title that was given to the god Nergal, who was linked to Shamash, Babylonian god of the sun.

There are generally two broad opinions on the origins of Apollo: one derives him from the East, the other connects him to the Dorians and their apellai. In any case, Walter Burkert notes that components of various origins are discernible in his worship: a Dorian Greek, a Cretan-Minoan and a Syro-Hittite.  According to the first opinion, both Greek and Etruscan Apollo came to the Aegean  during the Iron Age (i.e. from c.1100 BC to c. 800 BC) from Anatolia. Homer pictures him on the side of the Trojans, against the Achaeans, during the Trojan War and he has close affiliations with a Luwian deity, Apaliunas, who in turn seems to have travelled west from further east. The Late Bronze Age (from 1700–1200 BCE) Hittite and Hurrian Aplu, like the Homeric Apollo, was a god of plagues, and resembles the mouse god Apollo Smintheus. Here we have an apotropaic situation, where a god originally bringing the plague was invoked to end it, merging over time through fusion with the Mycenaean  healer-god Paeon; Paeon, in Homer's Iliad, was the Greek healer of the wounded gods Ares and Hades. In other writers, the word becomes a mere epithet of Apollo in his capacity as a god of healing, but it is now known from Linear B that Paeon was originally a separate deity.

Moon God Man - Temple in Ur

Demeter - Goddess of Fertility of the Earth