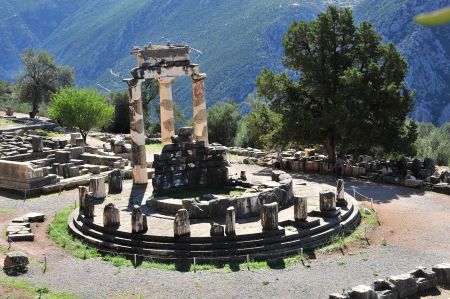 In ancient times, Delphi was considered to be the center of the world of that time. According to the myth, the divine Zeus had let two eagles rise from one end of the world, which lateron they met in Delphi.

The exact place was indicated by the Omphalos, which in Greek is considered the umbilicus = navel of the world.

The earth mother Gaia united with the mud, which remained after the end of the Golden Age of the world, bore the winged snake Python (also often referred to as "dragon"). Python had light-hearted abilities and lived in the place that was later called Delphi.

Hera, the wife of Zeus, was a granddaughter of Gaia. Gaia prophesied her jealous granddaughter that Leto, her rival and one of the mistresses of Zeus, would at some time bore twins (Artemis and Apollo), who were bigger and stronger than all her children. Python prophesied that Apollo would kill him, so he set off to kill Leto but she did not do. So Leto left her children and Apollo began to hunt Python. He sreached him at Delphi and killed him. Through the shed of pythons blood, his light-hearted abilities transferred to the place. Thus, Delphi was getting away from the control of Gaia, and from then on was under the protection of Apollo, and thereafter was sought by many rulers to question the "oracle" for predictions for certain events.

The oracle of Delphi was dedicated to Apollo and is considered the most important oracle in ancient Greece.

Pythia, the only woman to enter the Temple of Apollo, served as the medium of God. The office of the priestess probably goes back to the ancient cult of the goddess Gaia. The Pythia was probably tranceed by the inhalation of gases containing ethylen, which emerged from a crevasse. Her words were interpreted by the chief priests of Apollo.

The oracle developed a considerable influence in the whole of Greece and was surveyed above all important enterprises (eg wars, foundation of colonies). Thus it developed into a major political factor.

The historian Herodotus tells us that the Lydian King Croesus questioned the oracle of Delphi, before he came into the field against the Persian king Cyrus II in 546 BC. From the reply that he would destroy a great empire, Krösus dared the attack, but was defeated. The prophecy was not related to Persia, but to his own kingdom.

As apollonical wisdoms, the aphorisms at the entrance of the temple of Apollo are known as "know thyself" and "nothing in excess".

Hadrians Gate Antalya - Gate of Honor for the Emperor