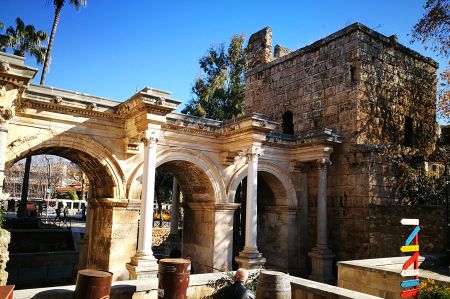 The Hadrians Gate (Turkish: Üçkapılar = "the three gates") - is a significant landmark of Antalya, the ancient Attaleia, next to the famous harbor in the old town center of Kaleici.

The Gate of Honor, which was integrated into the existing city wall and flanked by two towers, was built on the occasion of a visit of the Roman Emperor Hadrian. Since Hadrian visited Asia Minor between 121 and 125 AD as well as between 128 and 132 AD, the dating of the building is controversial discussed. The splendid decorations still suggest the richness of the ancient period.

The building had two dedication inscriptions, the title of which is called the Olympics. The Emperor accepted this title in 129 AD, which is why this inscription may have been made after this date. At least the southern of the towers of the gate was devoted to the sister of Hadrian, Domitia Paulina, by Iulia Sancta. Since the sister died around 130 AD, the tower will probably have been donated before the second trip of Hadrian.

The other, inscribed with gilded letters on the architrave of the arch, does not provide any clue to dating. However, this one could be connected to the first trip. Whether the Emperor had already visited Attaleia on this trip still remains unclear. However, since such visits were announced well in advance of the actual journey, it is assumed that the town, which is named as the founder and client in the not preserved inscription, was preparing itself for the construction of the Gate of Honor years after 120 AD. On the occasion of the actual visit or the second journey the second inscription would have been affixed. At about the same time or soon before, the southern defensive tower may have been built, so that the gate probably never became free.

The right tower was built in the 13th century, under the rule of Seljuk Sultan Kaikobad I. The structure was thoroughly restored in 1959/60, during which some of the columns were renewed.

The three-arched gateau resembles an ancient arch of honor at first glance, but is not standing free, instead it was attached to another building, at least on one side. All three passes have the same width of 4.15 meters at a height of 6.18 meters as far as the arch crest, measured by the ancient plaster level, which is about one meter below today's road level due to later earth and debris deposits. On both sides of the gate, the arches are framed by four columns of composite order. These columns are erected on freestanding posts, their shafts are unannounced and gray granite, while the remaining visible parts of the building are made of white marble. The columns stand on Attic bases and have a height of 4.94 meters with a bottom diameter of 0.51 meters. Their composite capitals are decorated with acanthus leaves in two registers, the rest of the capital body is covered with grooved pipe rods. They are stylistically close to the approximately simultaneously created capitals of the Celsus library in Ephesus.

While the arches had uniform widths, the distance of the columns to the left and right of the middle passage was extended by 22 centimeters. Above the columns is the 1,28 meter high entablature crumpled. The architrave, which originally bore the inscription in the form of metal letters, is divided into two smooth bands (fascia), which are richly embellished with ornamentation: the lower fascia, the string of periwinkle, the ovary and the leafy cheek. Above this is a frieze of strongly acanthised, uniformly rhythmic waves, the shoots of which end in large flowers, rosettes, and leaves. With their plastically elaborated stems and acanthus, they fill almost the entire frieze surface, yet the relief ground is smoothly smoothed and worked out. There follows a tooth cut strip framed below and above egg bars. The above-mentioned geison is formed as a simple ionic hanging plate. The sima, which forms the entablature, is decorated with regularly distributed heads, between which an anthemion of four palms and three lotus blossoms is mediated. On the end faces of the cranked sections above the columns, a lion head is placed centrally between the anthem.

The arches are themselves decorated with inserted, flat cassettes, each containing rosette and flower ornaments, which are held by egg rods. The central pylons of the gate are so narrow that the archives of the arches supported by them are clashed. The wider outer pylons end in flat antennas with corresponding antenna capitals.

The gate reaches a height of 8.03 meters to the top of the entablature. From the once existing upper floor, which, according to Francis Beaufort, who investigated Antalya in 1812, and the second inscription, no exact idea can be gained. As Beaufort saw remains of a total of 14 columns, and only four of the larger lower order were mentioned, the upper floor was also equipped with columns, and the remaining ten columns were added. From the upper floor towards the end of the 19th century only the bottom stone was preserved. There were two square abutment bases, which did not have an axis relation to the column position of the lower floor at a yoke width of 2.36 meters.

To the east of the gate and the old city wall is the broad Atatürk Street, divided by a double row of stately high palms in two halves of the roadway. It leads in a wide arc southwards to the town hall, behind which the visitable city park stretches up to the high cliff edge over the gulf. The park offers a lush subtropical flora, beautiful walks and at least magnificent views from the city cliff over the Gulf with the beach Konyaalti and the new seaport on the distant shores to the gigantic mountain scenery of the Lycian Taurus; various guest and leisure facilities as well as picnics and playgrounds are integrated too.

After the restoration of the picturesque harbor district below the citadel (Kaleici), the old harbor and its surroundings, with hotels, restaurants, boutiques and bazaars, is the center of the tourist business.
Further parts of the citadel, which rises steeply above the marina, are being renovated. Not far to the north-east of the old harbor stands the landmark of Antalya: the Yivli Minare (= "Shaped Minaret") in the expressive Seljuk style with a square base, tapering up to an octagon. The minaret, decorated with dark-colored glaze tiles, belongs to a mosque which was converted from a Byzantine church by Alaeddin Kaikobad (1219 - 1236).

Walk to the ancient town Kyaneia in Lycia