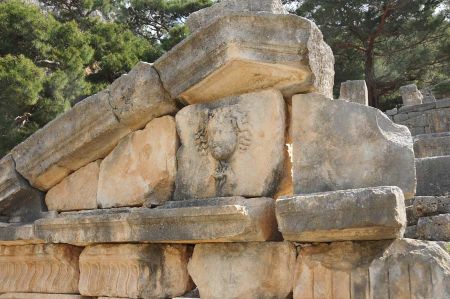 From Kas, our journey was leading along the coast road D400 in direction to Kumluca and nearly into the center of Finike, when we turned right to the national road 635 towards Elmalı.

First always along the Akcay, later we arrived at the village of Cafallar, approximately 28 kilometers later.

We passed through the village hiking, continued to the village of Arif, which is the correct destination for visiting the ancient city of Arykanda. We were pleased about the quality of really good road especially today, because there had been a real downpour of rain at the time we were using it. At the northern end of the village next to a small waterfall, a narrow road leads to about 1.5 kilometers directly to the mountain terraces Arykanda. And no more rain at all.

The ruins of the ancient city are laying on terraces on a steep slope between 710 - 820 meters. The complex offers a wide view of the surrounding mountains and the valley from all terraces. Similar topography is responsible that the place has got the name "Delphi of Lycia".

Even before entering the fields of ruins it was clear already, what we have often noted when visiting ancient places, with what a secure eye and feeling for the location for establishing city this place was selected. A simply fascinating panoramic view provided by each terrace lying incidentally 710 - 820 meters above sea level, an excellent view into the surrounding mountains and the valley. The two really impressive massive summits of Kizlar Sivrisi Tepe with 3.086 meters above sea level and the Akdag with 3.030 meters height in the back, the views along the Akcay valley in direction to modern Finike and direction Kas too, opens in the valley between Kofu Dagi (2.469 meters) and Alaca Dagi (2.338 meters). We are immediately sure why Arykanda has been referred to the Delphi of Lycia in ancient times, the topography and mountain scenery is very similar and just the view is worth already to do the journey to Arykanda.

Investigations in the ruins have revealed the first settlements of these terraces already at about 2,000 BC. Arykanda itself was probably built at the beginning of the sixth century BC by Lycians, as evidence the discovery of coins from the 5th century BC can be seen. Besides Xanthos, Pinara, Patara, Olympos, Myra and Tlos, Arykanda belonged to the Lycian Federation. First time Arykanda was mentioned in Roman writings was around 200 BC by pointing to the really arrogant citizens of Arykanda which have been described with extravagant and wasteful, and were accordingly as strongly over indebted.

Like Limyra,  the town Arykanda was assigned into the Roman province of Lycia et Pamphylia from 43 BC. With the spread of Christianity there is evidence of early followers of this new religion in Arykanda. With the onset of the persecution of Christians by the Roman rulers to 300 AD they were also not spared in Arykanda. The city has existed until the eleventh century and during the Byzantine period even was bishopric. Why the city was then abandoned, is largely unknown.

Much of the excavation, which will continue as before, could promote Roman buildings. Thus one finds on the highest terrace, where we start our trail, the remains of the stadium, but the rows of seats only set up on the mountain side and the length of 170 meters is, compared to other stages, relatively small. The view down is perhaps one reason for a second grandstand not have been built, cause it would have destroyed at least a part of the visual field. But that's just a guess. To the west of the stadium, about 300 meters away, are the ruins of Buleuterion (meeting house) of Arykanda. The ruins of a building that may have served as Stoa (scientific scholars house), several office blocks and a cistern we could find here.

The mandatory theater shows 20 rows of seats, which were incorporated centrally into the rock, while the side wings were artificially raised and added later. Overall, the theater is still very well preserved, so that you may well enable the view. Accordingly, we stay for a while, enjoying the peace and the view. Further down we come to the Agora and the original marble encased Odeon. The necropolis with grave sites, some of which are built in the form of small temples, followed on the next lower terrace. We set the path continuously downwards and thus reach the gymnasium and the bath. Again, can in part be a supply of fresh water nor recognize the existing lines.

Since there are other worth visiting places like Idebessos, Akaliassos, Rhadiopolis and Cormus around, it is advisable to thoroughly, to spend a whole day in the region. Basically, a trail from Finike, which is around 100 kilometers away, can be good to createa trip to other places too. If you have the appropriate level of interest and the time should be scheduled with Limyra necessarily, so that we would recommend a stopover. The scenery alone is worth this tour already.

Walk to the ancient town Kyaneia

Saint Nicholas of Myra - a Christian character in Demre

We have 450 guests and no members online