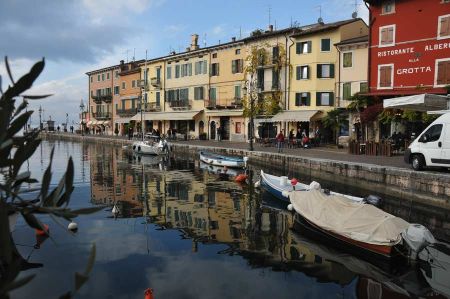 From the Brenner Pass our route led down over the seemingly mighty Franzensfeste, which we noted down for a later visit, towards Bardolino on Lake Garda.

Almost every kilometer down into the Veronese Plain brought changes to the landscape, both in terms of the color of the rock and the flora. So the orchard culture switched to viticulture, the forestation of pines, firs and spruces to cedars, cypresses, olives, oleanders and finally even palm trees, in short, we had arrived in the Mediterranean climate of Lake Garda.

Difficult research for an open campground 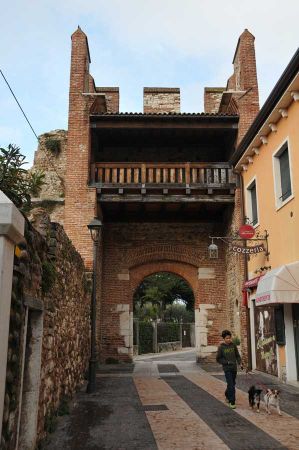 A first disappointment came a little later, however, because despite information to the contrary, all campsites, at least we approached, were closed. Even the data from the camping guide did not match reality. A resident of the town of Lazise told us a little later that after the holidays on All Saints' Day at the beginning of November almost "everything" around Lake Garda was closed. The campsites would only be open again at the beginning of December. A curious regulation, which, due to independent and arbitrary scheduling, should really no longer occur in the camper scene, especially since mobile home tourism is spreading more and more. With a little agreement along Lake Garda, it should be possible to keep at least one place open in every place, with the range of places available. So in the end we were happy to find a parking space in the public parking lot in Lazise.

For the orientation of potential travel enthusiasts in advance: Lazise is a small town with sandy stretches of beach on the lakeshore, an idyllic port facility and the fortress walls encompassing the town center, which form the core of the town of about 6,800 inhabitants on the south-eastern shore of Lake Garda, about 23 kilometers from the city center of Verona. surround. The climate here in the southern Lake Garda region is predominantly mild. The summers are warm but not too hot; the winters mild and with little rain. Snowfalls are extremely rare. But now also some information about the history, before we start exploring the city.

Intermediate stop in Lazise - camping next to main road 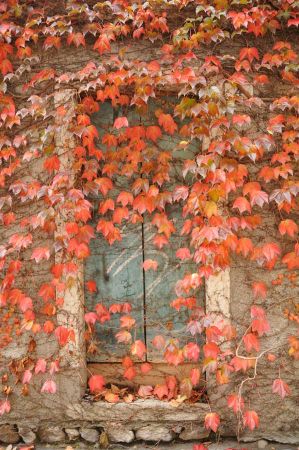 The first signs of settlement go back to prehistoric times; Back then there were pile dwellings in front of today's place (Taoli, Bagatta, Bor di Pacengo), the floor plans of which can still be seen today through the stumps protruding from the depths of the lake. Further traces of settlement are also known from the Middle Bronze Age, so numerous finds were made in the villages of La Quercia, Bor and Porto Pacengo. There are also diverse finds from the time of the Romans. From this period, clay oil lamps, coins that were minted under various emperors, stone graves, fragments of a memorial plaque that was set in a corner of the Dogana Veneta and a votive plaque that is now in the entrance of the town hall.

862 Otto I was crowned Emperor of the Holy Roman Empire of the German Nation. In order to reach Italy with his army, the train travels along the Adige Valley and from Rivoli arrives at the shores of Lake Garda, where it camps on the meadows of the San Daniele church, the foundation of which was recently found east of the port of Pacengo.

Otto II in Lazise - taxes on cargo boats from Lombardei 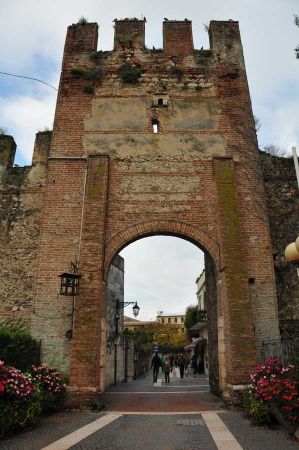 In May 983 Otto II stayed in Verona to take over the executive committee of the Reichstag, at which the conquest of southern Italy was decided. On this occasion, eighteen leading representatives of Lazise also received a certificate granting them considerable privileges, as well as the right to demand a tax from merchants coming from Lombardy who dock with their ships in the port of Lazise. Furthermore, they are granted the following rights: to go fishing in front of Lazise, ​​to charge taxes on goods in transit and to charge taxes on goods offered for sale on the market. In addition, they were given permission to raise the crenellated city wall and fortify the existing castle, as it did not offer sufficient protection against the frequent invasions. The castle itself was built towards the end of the 9th century to protect against the invading Huns. Several conversions and additional fortifications followed. The Scaliger Castle is one of the best preserved fortifications on Lake Garda. The square plan of the six-tower Scaliger fort is characteristic. In addition to its five slightly smaller towers, it consists of a mighty main tower, the so-called mastio. The castle complex is located in the park of Villa Bernini and was unfortunately not accessible to us. 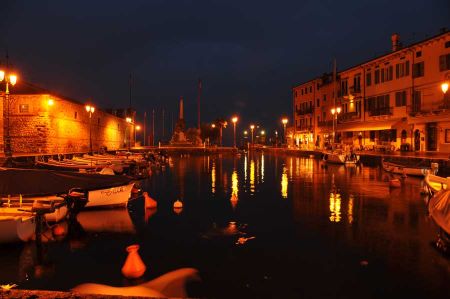 In the 11th century Lazise was a port station owned by the Bevilacqua bourgeois house, whose representatives expanded the castle here. Lazise has often been the focus of armed conflicts. Today's fishing port, which at that time was the berth for the Venetian galleys and boats, which had the task of guarding and protecting the south-east bank of Verona, once served as a naval port. The place focused on trade and the military at the time. Further expansion and reinforcement of these priorities was realized by subsequent rulers. It was only through the Scaliger that today's old town was transformed into a bulwark that served to defend the arsenal that had been built. 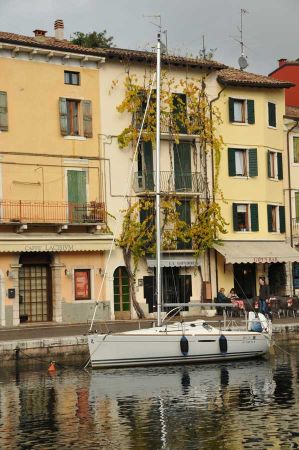 In May 1509 the Venetian army was defeated in the armed conflict near Agnadello. According to the latest findings, the captain of the galley fleet, Zuane Moro, weighted the entire ships with stones, set them on fire and finally sank them. In front of the new port of Lazise, ​​about 500 meters from the shore, at a depth of between 24 and 27 meters, is the wreck of the galley that sank in the 16th century and is 30 meters long and 3 meters wide. From 1607 the arsenal became a customs post under the rule of the Serenissima. Goods such as grain, paper, fabrics, oil and iron items were traded all over Lake Garda and the northern Italian river Adige. This ensured that the company had a priority position in trade. After the Napoleonic occupation had withdrawn, the place was in Austrian ownership from 1815 to 1866. But now back to our further course of the day.

After setting up the caravan, we set out to discover the place ourselves. 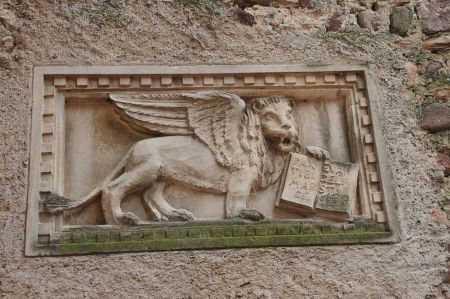 Lazise's town center is largely surrounded by the city walls built by the Scaligians in the Middle Ages with their watchtowers and city gates. The center is dominated by the castle, which is also from the Middle Ages. There are three large city gates through which you can enter the historic, car-free old town. On the one hand via the main entrance, which is directly on the busy street called Via Gardesana, opposite the public parking lot, on the other hand via Rosenheimstrasse (Via Rosenheim), which was so named because of the twin town Rosenheim, and finally via the street called Via Bastia which is also a beautiful, community-owned campsite (unfortunately also closed). 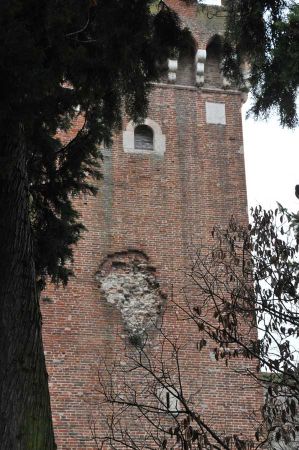 Lazise today has numerous, picturesque corners such as the Piazza Vittorio Emanuele and the small port, in which the typical fishing boats are still moored. The houses and arcades around the harbor as well as the characteristic alleys of the old town house numerous bars, restaurants and shops. The old port is adorned with the small Romanesque church of San Nicolò and the Dogana Veneta, the customs building built under the rule of the Republic of Venice, which was originally used as the arsenal of the Scaliger and the Venetians. Both buildings have been restored and are now available for events, concerts and exhibitions. The building was also the base for the production of saltpeter for the manufacture of gunpowder, then finally housed the customs office for the goods that were to be imported and exported from Veneto and also had a cotton weaving mill and the “Casa del Fascio” (association house).

The old coats of arms can still be seen in the upper part of the main tower, even if they first had Emperor Maximilian and later Bartolomeo and Antonio della Scala smashed. "The justice of the Mondragòn wronged those who were right." ("La giustizia del mondragòn la ghe dà torto a chi g'ha rasòn"): The Lazisiensi used this saying when they commented on the coat of arms of the wall. It shows the lack of trust the people of Lazise had in the tyranny. 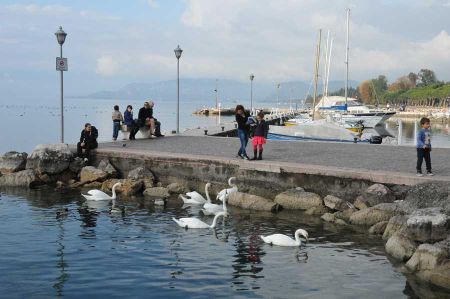 About three kilometers away from Lazise is the 13 hectare park "Villa dei Cedri", which has an approximately 5,000 m² thermal lake. The existence of this thermal lake can be traced back to an unknown person who had the idea to drill for a groundwater vein in order to irrigate the trees and plants in the park. The boreholes hit groundwater at a temperature of 37 ° C at a depth of 160 meters.

Today the thermal baths have various fountains and a hydro-massage pool. The daily water circulation of the entire thermal lake amounts to about half of the lake volume. This corresponds to an approximate daily amount of water of 3,500 m³. The water is bacteriologically purified, free of chemical pollutants and has a low mineral content. It therefore has a healing effect and helps prophylactically and therapeutically against numerous diseases of the skin and with circulatory disorders.

Due to the onset of rain, we had initially seen enough to continue our visit the next day. Hopefully the weather will play along again.