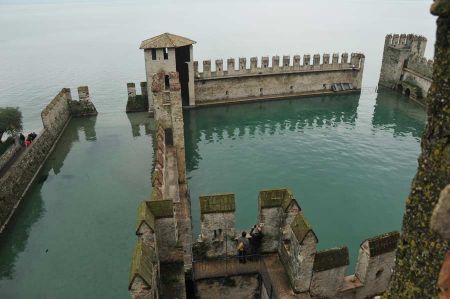 After an astonishingly quiet night in the parking lot in front of the main gate of the Lazise fortress, an extensive breakfast in the caravan, we started our first day tour south, always following the road along the lake shore.

We had spoken to Lydia and Georg shortly before in Augsburg about some destinations on Lake Garda, now one of these destinations was right in front of us: Sirmione, a small town of around 8,000 inhabitants, the main part of which and the fortress are located on a peninsula. Perhaps it is the shape and location of this peninsula that, along with the castle complex, makes this town one of the main attractions on Lake Garda: a triangle with legs about 1,250 meters long and a base width of 750 meters. On it placed three hills called "Cortine", "San Pietro in Mavino" and the "Grottoes of Catullus".

Of course, our interest was aroused to explore extensively here too and then to report accordingly, so we drove to the end of the public roads, because the medieval city is only allowed to be driven by the residents themselves. A good solution, as we found out again and again later in the narrow streets of the old town. The most noticeable building and also "entrance portal" at the same time is the imposing fortress of the Scaligerburg.

Castello Scaligero on the Sirmione peninsula 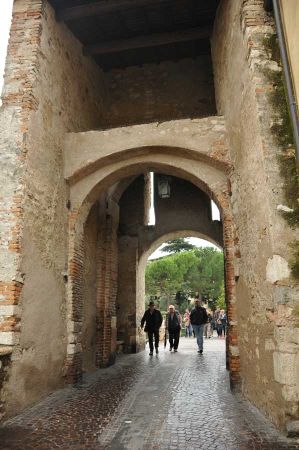 Several drawbridges, a curtain wall and two harbor basins separated the Scaligerburg and thus this district of Sirmiones from the mainland. The Scaliger clan built this fortified-looking castle on the first of the three hills on the first of the three hills from the old Roman fort, which at that time was only in ruins, which is located directly on the water and the inner harbor once protected the Lake Garda fleet bot. The castle primarily served to defend the Scaliger's position of power and shapes the image of Sirmione like no other building. Only a drawbridge leads over the deep moat through a portal with the coat of arms of the Scaliger, a "ladder", and the Venetian, the famous winged lion, into the castle, from which one could control the access to the village in the Middle Ages. Loopholes still show today how the castle soldiers were able to guard the way to Sirmione from here.

During an extensive tour of the battlements and the corner towers, we were able to get a picture of the sophisticated defense system, which consisted of thick walls, stairs and drawbridges. Even from the battlements, the view into the completely walled harbor basin was really impressive, but only from the 47 meter high Mastino tower in the large courtyard, which was the armory and main building of the military installation in the Middle Ages, you could really only see the entire castle complex due to its military-technical design admire with fascination. If humanity would finally learn to align their knowledge of technology, development and progress towards peaceful coexistence, what a step would be possible! 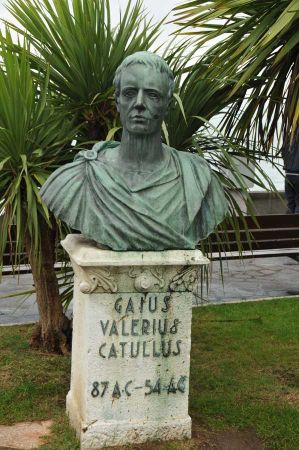 We continue our way through the narrow streets of Sirmione and get away from the lively center to the church of Santa Maria Maggiore, which dates from the 15th century and was built on the site of its Lombard predecessor. The exterior of the church is quite simple, except for a portico in front of the west facade, in which, among other things, a column from Roman times can be found. Inside there are interesting wood carvings from the 16th century and frescoes from the 15th century. The main altar is decorated with marble work from the 18th century. Understandably, we were more interested in the outbuilding, where the foundations of a temple from Roman times had been discovered during the renovation work, because in Roman times the peninsula was a popular holiday destination for high-ranking families. Of the three villas that were built during this time, only the "Grottoes of Catullus" on the last of the three hills are preserved today. The poet Gaius Valerius Catullus, who lived in Rome and Verona in the 1st century BC, came to visit this place occasionally and so he gave this villa its name. 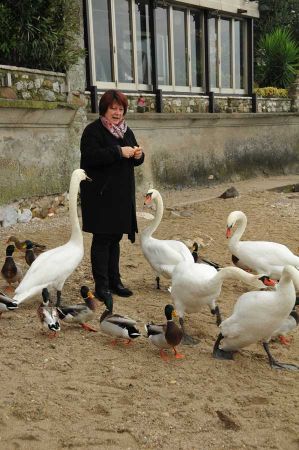 Sirmione became particularly important because of its location on the important trade routes. In the “Itinerarium Antonini”, a directory of the Roman imperial roads from the 3rd century, the existence of the place where the travelers could stop is already mentioned, the “mansino Sermione”, which was in the middle of the road between Brescia and Verona.

On the last of the three hills are the remains of a Roman villa, called "Grottoes of Catullus", which cover an area of ​​2 hectares and form the most important archaeological site in Northern Italy. Admittedly, the name of the ruins is misleading as it is neither a cave nor a place where "Catullus" lived. The poet Catullus (85–54 BC) had, as already mentioned, visited the place from time to time in order to find peace and relaxation here. In his verses ("Salve o venusta Sirmio" - "Greetings, you lovely Sirmione") he sang about the beauty of the place. In fact, the villa was not built until after Catullus death (around 150 AD). After the first partial excavation it was found that it was probably an ancient sanatorium with a thermal bath. 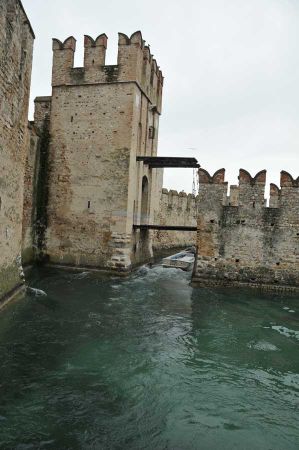 At the end of the 19th century, a boy discovered the Roman lead pipes, which run at a depth of 18 m and supplied the thermal bath in the Catullus caves with warm water. The warm water came from the springs at the bottom of Lake Garda. In 1889, a Venetian diver finally managed to lay pipes in a crevice that brought the warm water to the mainland. The Therapy Center "Thermal Baths of Catullus" (Terme di Catullo) was later built. The thermal water is used to alleviate certain forms of hearing loss, but also to treat skin diseases, rheumatism and diseases of the respiratory tract. The Romans already knew and used the healing properties of warm water, because the water of Sirmione is rich in sulfur, bromine and iodine and is hyperthermic. It rises in the basin of Monte Baldo in Veneto at an altitude of 2,200 m, from where the water reaches the sources of Boiola, Virgilio and Catullo underground at a temperature of 69 ° C. 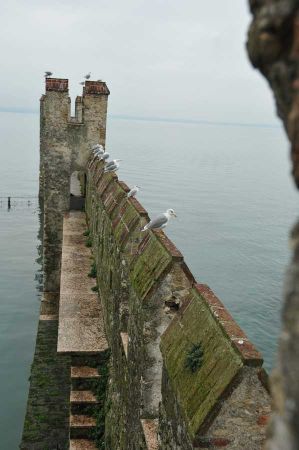 The Roman villa itself probably collapsed in the 4th century. The finds exhibited in a small museum at the entrance of the villa indicate that the villa was once endowed with great splendor.

Different ethnic groups followed in the settlement of the places on Lake Garda, which also settled and changed Sirmione. After the events of the Inquisition in southern France in the 1250s, the surviving Cathars and Patarins withdrew to northern Italy. They were able to keep Sirmione fortress as their last refuge for a few years. In the 13th century, the della Scala family extended their territory to Lake Garda and in 1262 took over government in Verona and Sirmione. In 1276 Mastino I della Scala took action against the deeply religious Patarins, who were outraged by the wealth and power of the Church. The castle was taken and of those who had suffered in Montségur as early as 1244, only 200 remained, who two years later were burned at the stake as heretics in the Verona arena.

Today, Sirmione has achieved tourist importance as an upscale holiday resort with its numerous hotels and other holiday accommodations, restaurants and shops with a wide range of offers. Excursion tourism, in the form of thousands of day trippers, has the place firmly under control all year round, which we would not describe as overcrowded in November. As a recommendation, a boat tour that goes around the peninsula from the new port is also mentioned. Unfortunately, access to the medieval docks is prohibited.

For us, an extremely interesting day trip to Roman times and the Middle Ages was drawing to a close, although Sirmione is probably much older, which can also be proven by finds of pile dwellings back to the Stone Age.