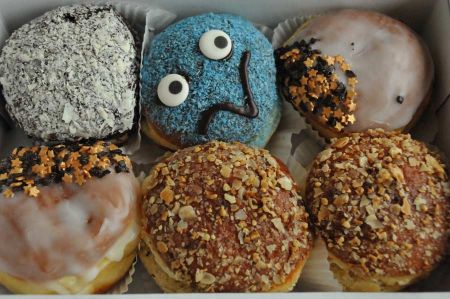 Various dates and private visits were the reason for one more stay in Kitzingen, which once more should lead to an experience with regional culture, in this case with a kind of sweet pastries made of yeast dough, the designated kind of donuts and offered in a special variety at carnival time.

And even this year's motto of the well-known Kitzinger Carnival Society for the season 2015/16 "WE ARE CARNIVAL" was chosen as the motto, events of this kind do not apply to every citizen as really attractive and worth visiting. The motto of this year's 64th Kikag-Carnival Session, which began with the 11.11.2015 and now culminated with the carnival parade in February 2016, is certainly attractive and not just in the context of national importance complex Carnival Museum in Kitzingen, but it could not really lure us. Carnival muffle, so we are!

When it came to the coffee time, really fresh donuts were offered, so enthusiasm was clearly noted. In the shipping box the dough pieces were looking really delicious already, lured provided with various fillings. Originally donuts are fried in hot fat or oil, mainly for national holiday festivals and at beginning of fasting period and so in the strongly Catholic regions these pastries have become increasingly popular during the carnival time too. The term "donut" itself can be ascribed to the Old High German term Krapho traced what means, claw 'or' hooks' because the donuts were not originally round. This term was transformed later to Craphun.

Johann Christoph Adelung (born August 8, 1732 in Spantekow; † September 10, 1806 in Dresden) was a German librarian, Lexicographer and German studies. He defined in his Grammatically Critical Dictionary of English dialect:
"The Kräpfchen, in ordinary life Kräppel, is a sort of round cake of several styles which either are filled or unfilled and are baked in lard or in the oven, and served as donut cake mostly hot.

Today donuts in numerous variants batter, choux dough or quark dough are known in many countries:

In Bavaria and Austria donuts are typically filled with apricot jam, but also other jam fillings such as raspberry jam, or even pudding and praline fillings are used and sold during the carnival season.
In Austria donuts without additional designation are always filled with apricot jam, otherwise this must be indicated.Donuts are like the donuts, balls of dough filled with jam or the like after baking. They are sometimes also called Berliner Ballen.
In Hesse and parts of Thuringia talking about donuts means (medium German Kräppel also Kreppel) a pastry made from yeast dough like donuts.
Franconian donut correspond donuts, but they are filled with the mark of rose hip(also Hiefenmark or Hiffenmark called).
In Poland they are known as Paczki. They are, especially during Fat Thursday' at carnival time very popular.
In Portugal called Malasadas, they are traditionally stuffed with jam. Since 1878 they are spread on Hawaii too by immigrants.
In Romania hazelnut donuts are known as gogoaşe.
In Hungary, in a slightly divergent form with marmalade or jam they are known as (lekváros-) Fank. These, (jam) donuts' are similar to donuts.
The donuts produced in Italy are smaller, Bomboloni, as they are called in South Tyrol. They are very similar to those called Berliners. The widespread, particularly in the former Habsburg territories in Italy Trentino, Friuli and Veneto, donuts are largely identical to the Austrian or southern German versions of this pastry.
In Greece there are the Loukoumades, dough balls or rings, which are made from yeast dough with addition of cinnamon and covered with honey, but often sprinkled with sugar or powdered sugar or glazed.

Even in Kitzingen there were a variety of fillings ranging from jams to soured cream with lemon, as well very tasty but very sweet too. But do not always calculate the calories.
Just enjoy the tasty pastry!