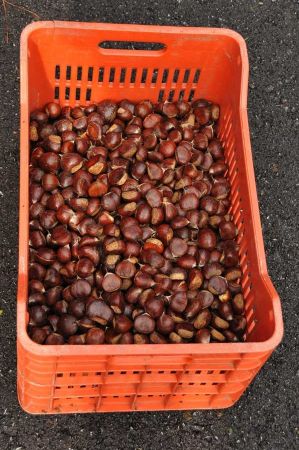 After our meeting with Nikos at the local petrol station of Rapsani we were going up towards the center, where the female "Harvesting Team" from the United States was already waiting for us in the chestnut plantation.

And even the result of the chestnut harvesting was not corresponding with Nikos expectations, the baskets were at least half filled with chestnuts. So the baskets were loaded and we continued to the farm area.

In prehistoric times already, the sweet chestnut or chestnut was spread allover the Caucasian-Armenian area, known as fruit and processed for flour. The first cultivation of chestnut as a fruit tree is expected in the period 9 to 7 century BC, it was grown and collected first in the area between the Caspian and Black Sea. From here, the chestnut spread quickly to Asia Minor, Greece and the Balkans.

In ancient Greece, the chestnut was cultivated in Sparta were prepared for black bread, flour and soups. Chestnuts are mentioned in the works of Isaiah, Homer, Xenophon and Hippocrates. Greeks, Phoenicians and Jews negotiated the fruits throughout the Mediterranean region. In Great Greece (Magna Grecia), particularly in Calabria, the chestnut later on was planted in plantations.

The Romans spread the chestnut throughout the Roman Empire as far north as Britain, next to chestnuts and wood, they used honey and as medicine bark, leaves and flowers were used. Many writers dealt with various aspects with the sweet chestnut, as Pliny the Elder, Columella, Virgil, Ovid and Dioscorides. Emperor Augustus' chef Apicius even collected traditional recipes. Generally chestnut stood in high esteem.

In the early Middle Ages, the chestnut in southern Europe was a very important food crop. The Lombards King Rothari put chestnut trees on his list of protected trees in 641 and end of the 8th century Charlemagne ordered their attachment to the royal estate. In the 10th century the castagnatores had its own form of the farmers. Monasteries were planting chestnuts in many parts of the mountain. Chestnuts were at that time only a staple of many. They were used fresh and dried, cooked or raw, roasted or eaten as a meal. In mountain areas, chestnut was an important source of carbohydrates, especially in the winter. In the 11th-13th century, due to population growth of chestnut cultivation in the areas where no grain could be grown, chestnuts were an increasing help as the bread of the poor. The most important method of preservation was drying, partly by smoking. In the 12th century the word Marroni appeared, with the chestnuts of the best quality, large, sweet, tasty and easy to peel, new fruits have been designated.

Towards the end of the Middle Ages chestnuts were associated with poor digestion, headaches, bloating and increased sex drive. They were therefore considered as food for working people and for pigs, less than food for the upper classes.

The fruits are shiny, dark brown nuts. The fruits of a partial inflorescence surrounded by a spiny husk, develops from the scaly sheath. The spines are initially green and yellow brown to maturity. In the wild form the fruit cup has a diameter of five to six centimeters, in cultural forms it can reach ten centimeters. At full maturity of the fruit, the cup opens with four parts and dismisses one to three fruits. Some varieties of fruit cups drops together with the nuts contained therein.

The nuts have a high content of carbohydrates starch and sucrose. The high sugar content, together with the high water content of fresh fruits makes them perishable. The high carbohydrate content distinguishes the chestnuts from most other nuts, which contain mostly fats. The protein portion is free of prolamin and glutenin, chestnut flour is therefore capable only in mixtures with other flour for baking. The content of essential amino acids for humans is high. The protein content is even higher than in potatoes, but lower than in cereals. The fat content is low, but has a high proportion of linoleic acid.

When we go to assemble at on the neighboring farm next to the cozy fireplace in the evening, Nikos neighboring employed initially by shelling the chestnuts, which was then placed in a metallic grip in the open fire for roasting. After a few minutes the first chestnuts were roasted and could be served. A delicious dessert to nibble or just as a snack next to wine.