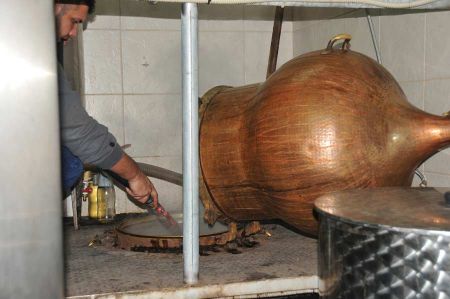 After visiting the castle, we had an appointment with Nikos on his farm area right next to the ecological vineyards, where some members of the group for later grappa distillation had already gathered.

There was a brief, mutual Introduction of participants, later a glass of homemade wine and some conversation around the campfire. With the setting sun, it was noticeably cooler, so we decided to go to a small restaurant on the waterfront in Platamonas already. Nikos had ordered appetizer plates for participants as a main meal was planned in the Distillery. Only a little later Nikos appeared with car and trailer, which contained the barrels with the wine marc.

In a convoy of cars we continued to the distillery little later where another farm group still worked to perform their grappa. Soon we were talking with the local focal masters and by that learned some details about the origin of grappa as well as some changes within passing times. We know Grappa as a predominantly originating from Italy or the Italian Switzerland. Wine marc brands which obtains from the fermented alcoholic wine production, are distilled. Burning of Grappa is, however, also wide spread in Greece. The grappa has a minimum alcohol content of 37.5 percent by volume, may also be up to 70 percent by volume.

With the beginning of the Crusades in the 11th century, scholars brought the distillation technology from Asia Minor to Italy, where it quickly spread in particular by the intervention of the Jesuits. From the same period the first documents are known in which the distillation of wine is described as submitted. Grappa is first mentioned by name in 1451: A Piedmontese notary left his descendants a basement with a distillation plant and larger amounts of aquavit or grape. At what point exactly Grappa is distilled in Greece, we could not find out in the conversations.

With the development of the Italian national consciousness Grappa became a national drink of the new state. Italian soldiers of World War I were given daily rations of grappa with the intent as to mitigate the horrors of war. However, its reputation as a drink of poor farmers did not changed until in the middle of the 20th century when grappa earned the attention and recognition of gourmets due to technical optimization of the distillation process and as a consequence spread on the entire world.

About a burner the wine marc is filled into large vats, which are continuously heated. Depending on the location and special features of the basic substance of the wine grapes the taste of the distillate is always a little different. Small additions can achieve flavor variants, which then lead to a commercially variety of flavors. Here in Platamonos the wine marc was distilled without any additives. With the closing of the copper distillation bell the process then begins leading the distillate as a vapor through a copper tube, which then flows into the condenser. The steam is cooled and at the end the Grappa flows into the established reservoir.

Several times we observe the operator of the installation process of reviewing the pending temperatures continuously. From chemistry classes, we are still aware that the temperature must be precisely maintained, so that no methyl alcohol is distilled. Of course, we needed to taste, what other reason for spending the evening in a distillery. Some busy hands are working already in the background to prepare our dinner. In addition to delicious fresh salads there were Greek grilled sausages, which origins from a neighboring farm specialized on ecological products as well. An extraordinary evening which gave us new and so far unknown views and a lot of fun before going back to Zampetas in Thessalonica.

The Waterfall of Edessa - short trip into the city