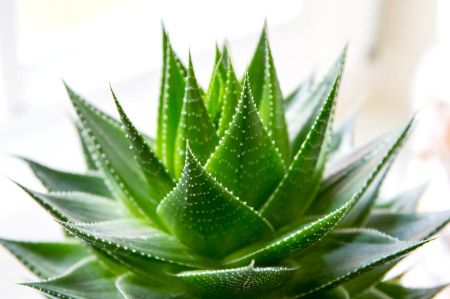 Aloe vera, also known as the medicinal aloe, is a species of succulent plant that probably originated in Northern Africa, the Canary islands and Cape Verde. Aloe vera grows in arid climates and is widely distributed in Africa, India and other arid areas.

The species is frequently cited as being used in herbal medicine. Many scientific studies of the use of aloe vera have been undertaken, some of them conflicting. Despite these limitations, there is some preliminary evidence that Aloe vera extracts may be useful in the treatment of wound and burn healing, diabetes and elevated blood lipids in humans. These positive effects are thought to be due to the presence of compounds such as polysaccharides, mannans, anthraquinones and lectins.

Aloe vera has a long association with herbal medicine, although it is not known when its medical applications were first discovered. Early records of Aloe vera use appear in the Ebers Papyrus from 16th century BCE, in both Dioscurides' “De Materia Medica” and Pliny the Elder's Natural History written in the mid-first century CE along with the Juliana Anicia Codex produced in 512 CE. Aloe vera is non-toxic, with no known side effects, provided the aloin has been removed by processing. Taking Aloe vera that contains aloin in excess amounts has been associated with various side effects. However, the species is used widely in the traditional herbal medicine of China, Japan, Russia, South Africa, the United States, Jamaica and India.

Aloe vera is a stem less or very short-stemmed succulent plant growing to 60–100 cm tall, spreading by offsets. The leaves are thick and fleshy, green to grey-green, with some varieties showing white flecks on the upper and lower stem surfaces. The margin of the leaf is serrated and has small white teeth. The flowers are produced in summer on a spike up to 90 cm tall, each flower pendulous, with a yellow tubular corolla 2–3 cm long. Like other Aloe species, Aloe vera forms arbuscular mycorrhiza, a symbiosis that allows the plant better access to mineral nutrients in soil.

The species has a number of synonyms: A. barbadensis Mill., Aloe indica Royle, Aloe perfoliata L. var. vera and A. vulgaris Lam and common names including Chinese Aloe, Indian Aloe, true Aloe, Barbados Aloe, burn Aloe, first aid plant. The species name vera means "true" or "genuine." Some literature identifies the white spotted form of Aloe vera as Aloe vera var. chinensis, however, the species varies widely with regard to leaf spots and it has been suggested that the spotted form of Aloe vera may be conspecific with A. Massawana. The species was first described by Carl Linnaeus in 1753 as Aloe perfoliata var. vera, and was described again in 1768 by Nicolaas Laurens Burman as Aloe vera in Flora Indica on the 6th of April and by Philip Miller as Aloe barbadensis some ten days after Burman in the Gardener's Dictionary.

Scientific evidence for the cosmetic and therapeutic effectiveness of Aloe vera is limited and when present is typically contradictory. Despite this, the cosmetic and alternative medicine industries regularly make claims regarding the soothing, moisturising and healing properties of Aloe vera, especially via Internet advertising. Aloe vera gel is used as an ingredient in commercially available lotion, yogurt, beverages and some desserts. Aloe vera juice is used for consumption and relief of digestive issues such as heartburn and irritable bowel syndrome. It is common practice for cosmetic companies to add sap or other derivatives from Aloe vera to products such as makeup, tissues, moisturizers, soaps, sunscreens, incense, razors and shampoos. Other uses for extracts of Aloe vera include the dilution of semen for the artificial fertilization of sheep, use as fresh food preservative, and use in water conservation in small farms.