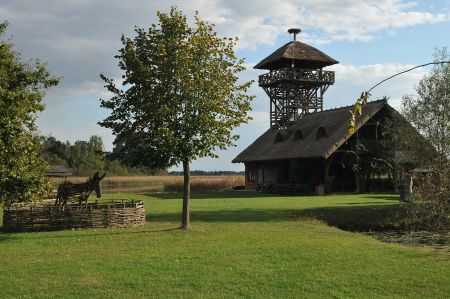 What appears rather insignificant and trivial in the title picture, in reality, is an increasingly important source of income for the Zasavica Nature Park near Sremska Mitrovica and its animal world living in the park, especially the Balkans Donkey.

We had already published some articles about the nature reserve and also about the town of Sremska Mitrovica, mainly because the park is perfect as a stopover for campers on the way to the south.

Today Balkan Donkeys are rather rare, because they have become a very rare race; The small herd in the nature reserve Zasavica is one of the last of its kind, besides, only small groups are known in Montenegro. The peculiarity of the Balkan Donkey is its milk, of which they only give only about 0.2 liters per animal and per day. The milk of this breed is correspondingly expensive, it costs about 40 euros per liter, which makes it almost too expensive for drinking. Here, cheese is the magic word. Since, however, 25 liters of donkey milk were needed to make one kilo of escalated cheese, also known as Pule, the price on the farm Zasavica was fixed at 1,000 euros per kilo Pule.

For the production of Pule the donkeys are milked three times a day by hand.

On the farm of the Zasavica Nature Park, there are about 300 to 500 of these donkeys (Domaći balkanski magarac), which have to be milked 3 times a day, which requires a very intensive men-power. A considerable effort, which has to be done here in the nature reserve "Zasavica" in the Vojvodina, if you want to win the milk of the donkeys. However, the milk is very healthy because it contains only about 1% fat and about 60 times more vitamin C than cow's milk. Also, similar to mares milk, donkey milk is very similar to human mother's milk.

From a part of the donkey milk with the, according to the manufacturer Jovane, who personally explained the natural park, very complicated procedures the most expensive cheese in the world is produced. The cheese, called Pule, which is made from this milk, is a white, crumbly cheese which is produced here on the farm in the shape of a truncated cone with a weight of 50g (price: about 65 euros). Tastefully reminiscent to the Spanish Manchego, it is the most expensive cheese in the world, but is much more powerful in the taste.

Pule cheese received additional attention in 2012, when the Serbian tennis star Novak Djokovic bought the entire season amount of the exclusive Serbian cheese in order to supply exclusively a restaurant chain, which is run by the sportsman in Serbia.

In addition to the most expensive cheese in the world, Zasavica also sells bottled donkey milk, which, as is well known, already owed Cleopatra its beauty. Not only because of the cheese and the milk, Zasavica is a worthwhile destination on the journey across the Balkans.

Vistonida Lake - biotope and bird paradise on Via Egnatia