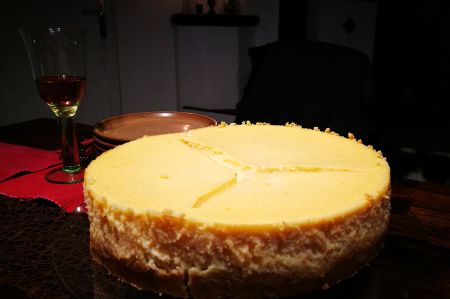 A few days stopover with Lydia and George had also led to an invitation from Sabine and Achim to a traditional US-evening for a later the evening planned illustrated travel explanation by ship from Barcelona via Tenerife, the Azores to Florida.

The evening started with a dinner on a decorative designed table with typical American hamburgers, which everyone could put together based on own ideas, the typical but homemade beef slice on it grilled on an open fire. Of course, with the obligatory fast-food thoughts in mind and yet just delicious.

A little later and as an introduction to the travel tour description, there was an absolute treat, the homemade, real New York Cheese Cake. We were so much impressed by taste and consistency that we promptly asked for the recipe and the way of production, which we would like to reproduce at this point.

As an introduction to the travelogue: New York Cheese Cake

First of all, as we were told, all ingredients should be brought to room temperature in order to achieve optimal mixing later. Since this can take some time, the required ingredients should be provided early.
With the beginning of the pitching, the first step is the provision of a spring form pan, which is greased with butter. In the second step you crumble simple butter biscuits (either in a bag or in a lightning hacker), which are mixed with about 30 grams of sugar and a little melted butter. Then there is the filling of the spring form pan with the crumbled butter biscuit / butter sugar mixture. You are also welcome to use wholegrain butter biscuits. Please also pull up the edges with the crumbled mixture a little, so that later in the baked state a biscuit spine forms as edge. Now let's cool down the spring form with its content, while the oven is already preheated to 250 degrees. 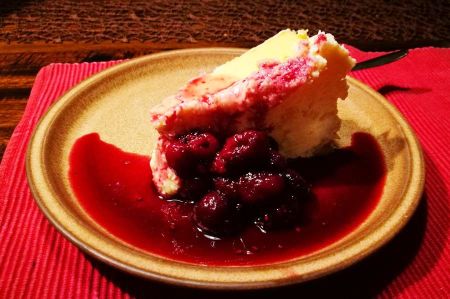 In the next step, the surface is then prepared, which is relatively quickly possible. We mix 270 grams of sugar with the vanilla sugar and the flour. In another bowl, we mix the cream cheese, the lemon peel, the lemon juice with the cream, then beat the mixture slightly creamy, then add sugar mixture and the eggs one by one. Then the cheese cream mixture is poured into the spring form pan and smoothed a little. Now place the spring form pan on a baking tray in the oven and bake for about 10 minutes at 250 degrees, then regulate the temperature back to 100 degrees. A tip at this point: open the oven door briefly, so that the steam can escape. Now bake the cake for another 75 minutes.

Usually cranberry sauce is poured over the Cheese Cake, which consists of 100 ml of cranberry juice and 100 ml of apple juice, thickened with 100 grams of jelly sugar and boiled for about 5 minutes, then allowed to cool and pour over the cake.

Alternatively, we have added red berries.

The ingredients of the New York Cheese Cake with their quantities: