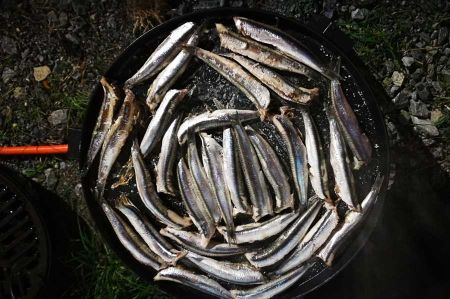 After a tour through the old town of Thessalonica, camper guests from Bulgaria had invited for dinner with fried anchovies at the camper stop. It was easily understandable to agree: anchovies are very tasty and healthy and are also one of the cheapest fish that you can buy in Greece.

They are the perfect choice for everyone, but especially for those who suffer from "heart problems" because anchovies provide a good deal of omega-3 fatty acids. In connection with the all-present Greek olive oil, which in turn provides the important omega-9 fatty acids, a delicious, cheap and healthy "heart cure". We were curious about their way of preparation.

The anchovies, the name comes from the Italian language "sardella" (Engraulidae) belong to the family of herring-like, in contrast to the sardines, which is the only species of the genus Sardina the family of herring (Clupeidae) is assigned with. In the Mediterranean, the sardine is more common in the west than in the east, but there are also occurrences in the Sea of Marmara (we had reported about the Papalinas in Ayvalik) and in the Black Sea. The sardine is named after the island of Sardinia.

Sardines and Anchovies looking quite similar 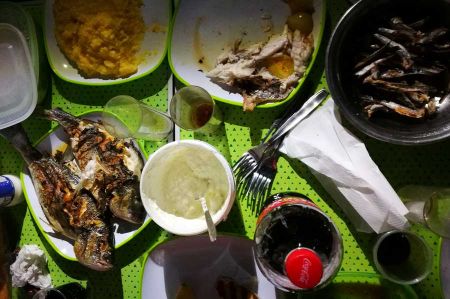 Since anchovies and sardines look quite similar, especially after the fish are gutted, there are now and then confusions, whether conscious or otherwise. They are hardly distinguishable in taste anyway. The small fish live as plankton-eating shoaling fish in the seas of temperate and tropical latitudes. Most species are mainly found near the coasts, some even in fresh wate.

In many Greek taverns, anchovies are the cheapest fish dish on the menu. The small about 10 cm long fish are usually grilled or fried. As a side dish there can be European fries or, more traditionally, some salad and white bread.

Lemon is coming with the Anchovies 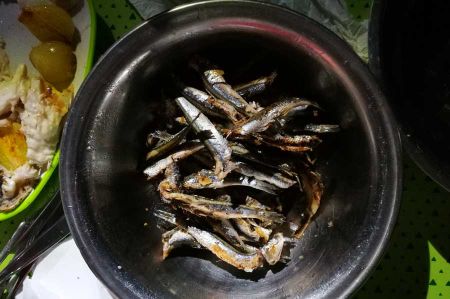 Sometimes one gets the anchovies with head, sometimes without, the European anchovy is considered as important food fish and is salted also offered as marinated Anchovis. The innards are removed in most tourist taverns. Very small fish are often eaten as a whole in Greece. With sardines, you remove the larger bones like the spine with knife and fork. Head and tail are eaten by some Greeks too. Mostly you will get a piece of lemon with the anchovies, which you squeeze on top of the small fish.

Sardines can be prepared with garlic, onion, tomato, olive oil, rosemary, thyme, parsley, oregano or basil in Greek cuisine. Sometimes the fish directly put on the grill without any ingredients, as in our case, when the gutted and headless fish were simply fried crispy in oil in a grill pan.
A rare but delicious recipe is stuffed sardines (with garlic, onions, etc.), which we enjoyed in a small taverna in Potidea on Halkidiki before already.