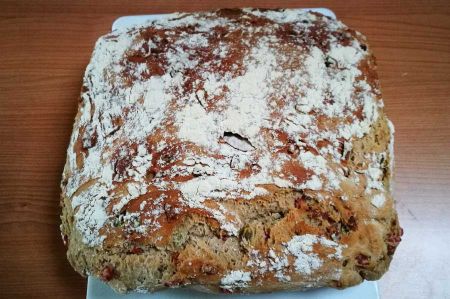 A renewed meeting with the two long-haul travelers Philipp and Micha, since yesterday on the camper stop Zampetas in Thessalonica, which had been slowed down on their way to Mongolia at the Russian border.

Still in good spirits and full of euphoria regarding the onward journey to Mongolia and despite the still great cold in Georgia, there were problems with their existing visa for Russia, so the two had decided to return to Greece via Turkey.

A stopover at hot springs at Kavala 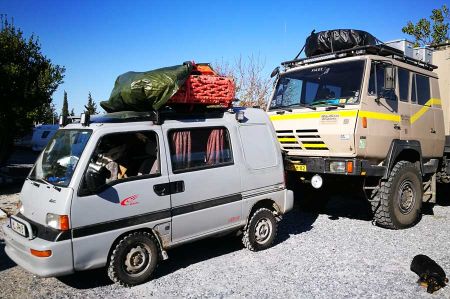 After a few days at the hot springs just before Kavala we had an appointment at Zampetas, our next stopover in the relation of the project work from Camping Rino in Macedonia. Towards evening Micha and Philipp arrived on the pitch with some other campers, where of course there was a warm hello.

Exchange of experiences and perspectives after the plan change regarding their further travel destinations ultimately led to the decision to prepare a meal together on the following day, which should also include the residual use of still existing ingredients from Turkey. After some deliberation, we decided to make a loaf of bread with the Turkish sucuk and jalapeno to be baked in it.

Turkish sucuk and jalapeno from Mexico 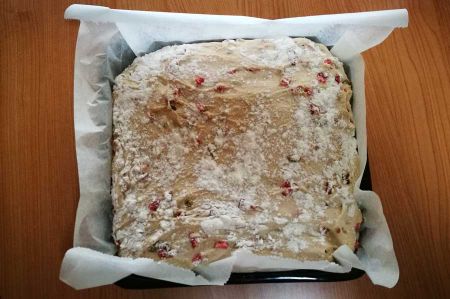 Who does not know the Turkish sucuk is explained, that it is a vigorously spiced raw sausage from beef or veal and lamb, which is now widespread from southeastern Europe to Turkey in various Arab countries and partly in Europe. It is a spicy sausage with ingredients like salt, pepper, cayenne pepper, allspice, cumin, garlic and other´s, air-dried and smoked in some cases. What makes it, similar to a salami, long-lasting and thus well suited for care while traveling. The Jalapeno are a small to medium-sized, hot pepper variety, which is named after its origin, the Mexican city of Xalapa.

We first prepared the bread dough so we could continue our talks next to it!

Meanwhile, Micha has already cut the sucuk and jalapeno and sautéed in a pan with olive oil. 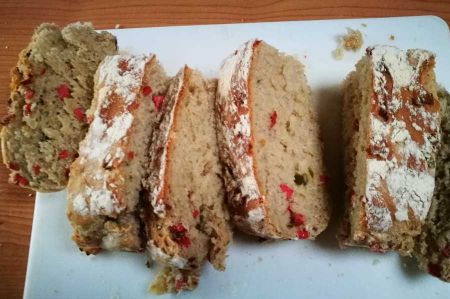 Crumble the yeast in 750 ml of lukewarm water and stir until it has dissolved. Then put the flour in a large bowl. Add the salt and sugar to the water-yeast mixture and knead well in the bowl, then knead vigorously for about 10 minutes with your hands until a smooth dough is formed. Meanwhile, Micha has already cut the sucuk and jalapeno and sautéed in a pan with olive oil. We let this mixture cool down a bit and then added it to the bread dough and kneaded with it. Cover the bread dough in a warm place for about 45 minutes. The volume of the dough should be approximately doubled.

Then knead the dough again briefly and then pour into an existing baking pan. In our case, we used the pan of the grill in the Fendt caravan, which we had covered with baking paper. Then let it rest for another 20 minutes. Bake the bread in the preheated oven (cooker: 200 ° C / circulating air: 175 ° C / gas: stage 3) for 40 - 45 minutes.

Good to know: Use a fork to check that the dough is completely baked.