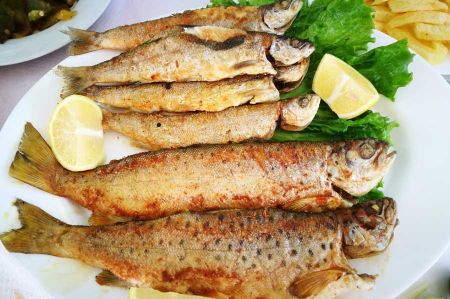 To expand the destinations for camper travelers as well for the expansion of Camper-route.de and in preparation for other items on alaturka.info we went to Pogradec, not at least to take a closer look at the local cuisine.

Although the Ohrid Lake is a paradise for fish lovers due to the still excellent water quality, the preparation varies greatly from place to place. So in the early morning we took off from Camping Rino in Struga to the center of Pogradec in Albania.

In general, Albania is still cheap and relatively undiscovered travel destination, especially in the interior right now it is something like the hype for many camper friends. This is probably due to the presentation of Albania as a partner country during the CMT fair in Stuttgart. 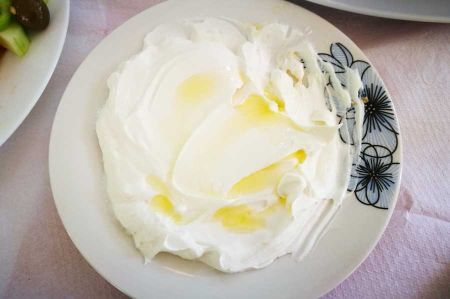 Of course, besides culture and antiquity, it is also important to discover Albanian cuisine. Although not fundamentally different from the Macedonian cuisine, because even in Albania, the influence of the centuries of Ottoman rule can still be felt today, which is not shown in the language alone. There is a similar to the Turkish Cacık Yoghurt, very similar to the Greek Zaziki / Satsiki, but rather milder flavored without oregano and / or thyme, which is served with many dishes. A small dash of olive oil on the yoghurt completes the taste a bit.

Served with grilled green peppers as a side dish, a colorful salsa with cucumber, tomatoes, olives, onions and green peppers garnished with mild goat cheese was served next to as well. Here, the proximity to the well-known Greek salad is very clear.
In addition, the bread freshly toasted with olive oil and a little garlic, hmmm - simply delicious. 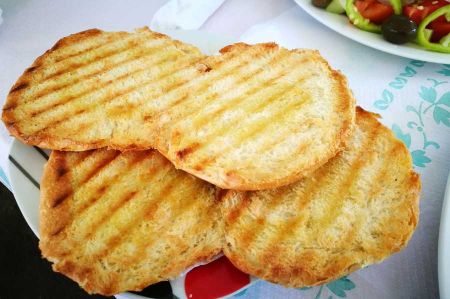 And as a further highlight - the trout so well-known for Macedonia, especially when occurring from the Ohrid lake and in professional circles called Salmo letnica trout, which is only living in Lake Ohrid. It has been tried to settle the trout in other waters of Macedonia, but without success. According to fishbase.org, the Ohrid trout is about 60 centimeters long, the silvery body is mainly lined in the upper part with black spots. Red dots are mainly found along the sidelines. The very tasty meat is pink.

The Ohrid trout is a very delicious food fish, which has led to a very strong overfishing during recent years. The trout is listed as endangered on the IUCN Red List. In 2005, there was a ban on fishing in Macedonia and it is hardly ever fished out of the lake, but on the Albanian side of the lake the protection of species is not yet pronounced: the fish has been ruthlessly hunted. Since November 2013, commercial fishing in Lake Ohrid has also been banned in Albania. In order to counteract the former overfishing, people bred the Ohrid trout in both countries. At institutes in Ohrid and Struga the rare species is "kept alive" by fish farming. 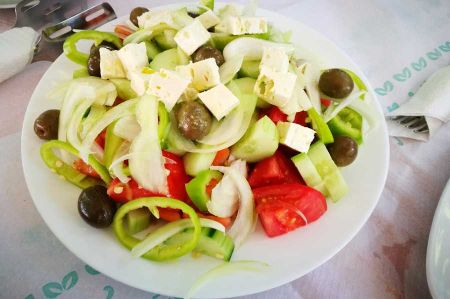 In contrast to the "Ohrid trout",  the Salmo Macedonicus no "well-known reputation name". A pity, a name like "Makedonka" would be possible to offer. This trout species is native in Macedonia too only, which occurs endemic in the upper part of the Vardar with the exception of the Crna Reka in Macedonia. However, it has now spread itself and is e.g. also to be found in the Treska river and in the middle section of the Matka reservoir. 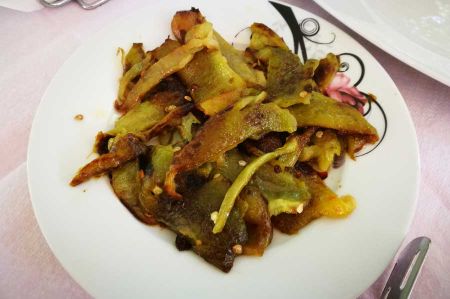 The Salmo Macedonicus reaches a length of up to 40 centimeters. On the flanks are, especially in the front area, numerous large, eye-like dark wine-red spots, whose center is occasionally blackish. Large animals over 30 centimeters in length have three vertical black bars in the back of the body, which are clearly visible in stress. The dorsal fin has a few pale wine red spots. In animals from the area of Doduna and Basnica, the front spots on the body are black. You could say that it looks similar to the brown trout native from Germany.

We were served the Salmo Macedonicus to the already mentioned dishes today, the taste was really great, very delicious. A successful culinary view across the close border.