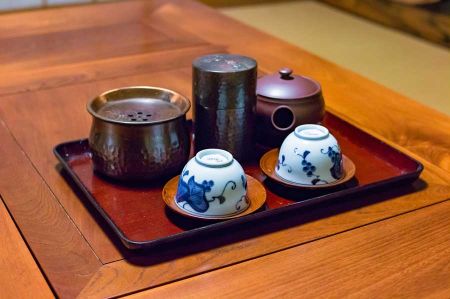 In almost all cultures on earth, tea is prepared in special, one could say typical containers, whether in jugs, in pots, in larger ceramic or wooden vessels, which often have culture-typical shapes and are in many places part of the arts and crafts.

The tea is then drunken from smaller drinking vessels such as bowls, cups and mugs.
In China, tea is infused in pots made of porcelain or unglazed clay, for example in clay pots from Yixing, or in lidded bowls (Gaiwan). In Japan, porcelain and clay jugs with side handles, called kyūsu, are common. In both countries, tea is traditionally drunk from bowls (chawan). Powdered green tea (Matcha) is brewed in larger bowls specially made for this purpose and drunken from these. In English preparation, a teapot and teacups are usually used, which belong to a service, but cup and mug brewing without a pot is also common, which is dominant in gastronomy, among other things. In the military, camping or on expeditions, tea is often prepared using lighter metal or plastic dishes.

Changes in taste and cloudiness due to cooling 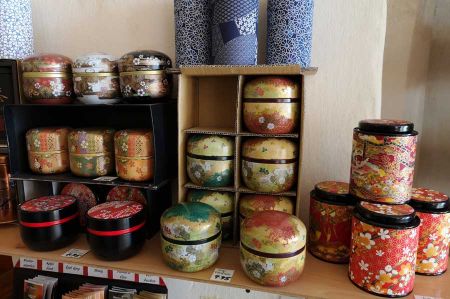 In any case, it applies to every tea drink that cooling down leads to changes in taste and cloudiness that cannot be reversed by reheating. The cloudiness consists of minerals, tannins, oils, caffeine and other substances that react chemically complex with each other and cause a massive change in the composition of the drink. They appear later in hot tea and in a different sequence, but lead to significant changes after two to six hours at the latest. Tea utensils are often designed for good heat storage, the pots are approximately spherical. Keeping them warm is easier with large-volume teapots with lids, which are often preheated with boiling water. Like coffee pots, they are made of porcelain and other ceramic materials or glass; stainless steel, cast iron, enamelled sheet metal or brass are also common. Tea warmers, tea lights and warmer are often used to keep them warm. 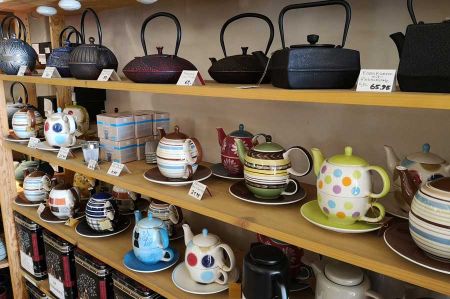 Tea is an aromatic drink and also leaves traces of taste in the container. In particular, containers made of porous material (unglazed earthenware) can absorb flavors and later release them back into their contents. Therefore, such containers are often used exclusively for the preparation of tea, sometimes just for the preparation of a special type of tea. This effect is sometimes intentional and it is recommended that the teapot only be cleaned sporadically. Smooth surfaces like porcelain tea sets enable better cleaning so that this taste-altering effect does not occur. Metal containers can give off a “metallic” taste to the tea. 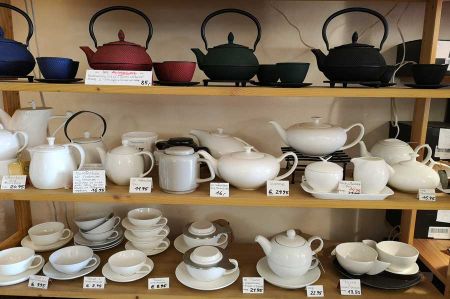 The trading activities of the Dutch East India Company also brought porcelain to Europe. Porcelain vessels proved to be particularly suitable for the preparation of tea and as a drinking vessel. As a result, the demand for porcelain soon became so great that other countries also began to import porcelain.
After East Frisia fell to Prussia, King Frederick the Great founded the Emden East Asian Trading Company in Emden, which imported a large number of porcelain vessels and tea of ​​considerable commercial value in the short period of its existence. Even today you can find some original Chinese porcelain from this time. The vessels from the Far East were adapted to the European taste as the volume of trade increased. 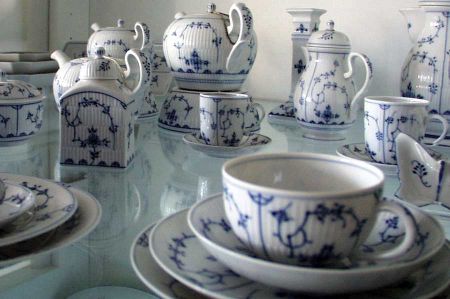 In 1709, however, porcelain was made in Germany for the first time thanks to the invention of Johann Friedrich Böttger and Ehrenfried Walther von Tschirnhaus in Dresden. In the course of time, more and more porcelain vessels were produced in the country itself, with the manufacturers based on Asian models in terms of shape and design.
In East Friesland, dishes from the Wallendorf porcelain factory were particularly popular. This so-called Dresmer Teegood (Dresden tea set) was available in two typical decors: a blue painting (Blau Dresmer) and the well-known red rose (Rood Dresmer). Other designs were known, but were not as popular. 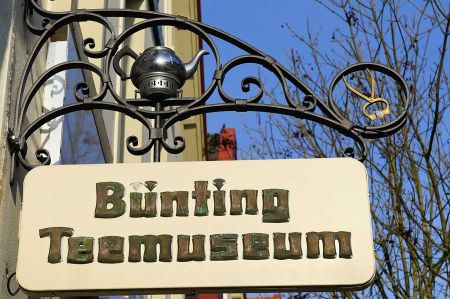 Such a tea set comprised a tea caddy (Teebüss / e), jug (Treckpott) and cups (Koppen, Kopkes) and earlier also a rinsing bowl (Spölkummke) in which the Koppkes were rinsed briefly before refilling - no sieves were used yet. Originally, the cups did not have handles as they are used today, and saucers were also still unknown.
Partly in East Friesland itself, partly outside of it, but especially for East Friesland, teaspoons were later designed and tea scoops, cream spoons and sugar tongs were produced with which the Kluntje (candy candy) is put into the cup, as they are still common today. There were also the occasional teapots and tea and sugar bowls made of silver.
The mentioned decorations of the tea set, applied to thin-walled, ribbed porcelain cups and associated teapots, tea caddies, etc. as well as the above-mentioned spoons are still available today, although the manufacturers changed variously over the years. Unlike in the past, today's teacups have handles and are served on a saucer (Schöttelke), and the tea is poured through a sieve that holds back the tea leaves.