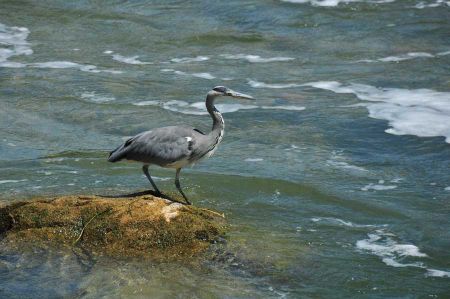 Very well, we can remember the oncoming hectic of a family member who was triggered on the approach of the gray heron to the koi carp living in the own garden pond.

Soon, doors were torn open, noise was made, and the bird was driven out even before it landed.

Similarly many people will act in dealing with heron Grayling, which behaves from the natural point of view quite normal in search for food actually. "But not from my pond", was always the annoying answer to our comments.

The encounter with the gray heron during our second paddling tour on the Main River was quite different. Already during the first canoe trip from Astheim to Schwarzenau we came upon one of these fundamentally shy birds, which was foraging on the edge of the bank shrubbery. We were not clear about the time it would take to cover the 12-kilometer long stretch, so we thought it would be more time to arrive at the pier in Schwarzenau than to watch the waterfowl. Now, during the second tour, we started the route much more relaxed and even paddled into several tributaries of the old Main River. An inspiring tour, if you want to observe the different ducks or even the gray heron. 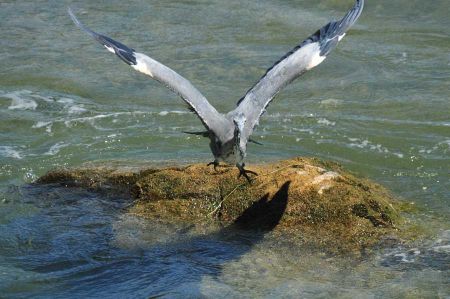 Shortly after the sandbank, we had the luck to meet a gray heron in a branch of the Alt-Main, which was barely recognizable in the branches of the tree. Without any noise from paddle strikes, we were able to drift slowly closer to its location due to the current of the river and thus had the opportunity to observe the Great Blue Heron very close. The plumage of our gray heron was white on the forehead and the top of the head, greyish white at the neck and crossed with white bands on the back ashen gray. As it shone in the sun, still partially wet, it was obvious that this heron was "recovering" from its last foray. The long beak was yellowish and turned brown on the beak ridge. The three long front toes at the end of the long stilt leg were spread wide apart, giving the impression of a rather shaky standing of the bird on the branch. The widespread toes are probably more of an advantage when the gray heron is on the bank for prey and thus prevents sinking into the soft ground. Our bird was certainly a meter tall, which, as the research had revealed, can mean a wingspan between 1.75 and 1.95 meters.

Below the branches sat a Mallard, who looked at us with her typical, friendly looking eyes. It remained very calm and relaxed, so that our friend gray heron saw no reason to panic. Shortly after, a mallard female appeared loudly chattering from the dense undergrowth, which has probably moved the gray heron, now also to go the distance. Normally, the gray heron starts with some jumps before taking off, which is not so easy in the dense undergrowth. Now some jumps were announced here from branch to branch, then the gray heron lifted with slow wing beats and its head pulled back to the shoulders. The long neck is almost curved in the form of an "S". Only during takeoff and landing the neck is stretched out straight. Typical also the strong croaking during the flight.

Habitat at the old arms of the Main River 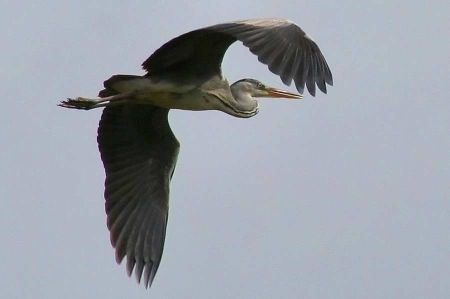 However, the Main, with its extensive altar arms, also offers excellent living conditions for the Gray Heron, as it needs shallow water zones for its prey, which consists mainly of fish. Accordingly, gray herons are found widely on lake shores, rivers, floodplains, reed belts, swamps, ponds, beaches and salt marshes. Pastures that are some distance from the nearest body of water are also favored by heron populations. In principle, their demands on their habitat are relatively low. They require large prey animals and in winter four to five months in which the waters do not freeze. Then the gray herons stay at the once selected location, so at least in the southwest of Europe. In the northeast, most gray herons migrate southwest or southeast in the winter months. One of the longest tours to date has been the way of a Swedish gray heron, which was found again in Sierra Leone, covering a distance of 5,865 kilometers. The tour to the wintering quarters starts in September and the gray herons return at the end of February to the beginning of March.

A little further during our canoe trip we could observe another gray heron, who was foraging on the shore. As a rule, the animals are traveling alone foraging. It has happened before; the gray heron vigorously defends their food territory. This defensive battle can even lead to the death of the intruder, especially during the breeding season, this behavior is quite common. The main feeding grounds are usually in the immediate vicinity of the hatchery, so the fight between the food rivals is to be understood as a defense of the survival of their own offspring.

Observations on the Rhine Falls near Schaffhausen 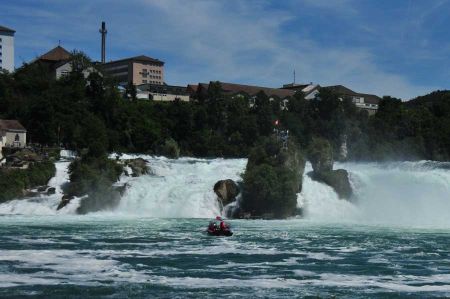 We made further observations during a short stopover at the Rhine Falls, where a gray heron unerringly fished to the shore for prey, even the many visitors close by. Our gray heron stalked like a bittern with lowered head and curved neck leggy through the shallow water. It stings lightning fast after the fish, which frolic in the shallow shore water. But the gray heron also eats rats and clams, which it - like the other food animals – consumes as a whole. On meadows, it waits stock-standing for field mice and sometimes also consumes eggs and young birds. Typical for such way of hunting is first a slow prevention and then a fast move. For fishing, it can land on the water, swim for one to three seconds and then fly up again. However, the preferred method is to land a few meters from the water and then slowly step into the water. 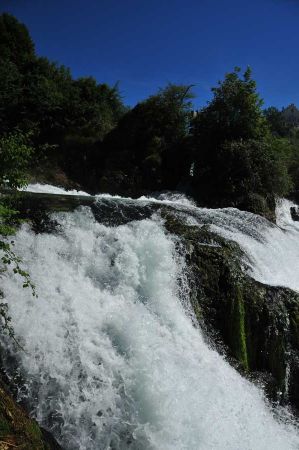 Very much to the displeasure of pond owners, the gray heron has recently penetrated more and more into urban areas, where it is sometimes even found in parks. Due to these activities the call for the hunter is often heard, but the gray heron is a wild animal in the sense of the Federal Hunting Act. A hunting season in Bavaria (16 September - 31 October), the hunting may, according to Regulation on the abolition of the closed season for gray herons is set from 25 July 1983 (colloquially: Gray Heron Regulation) within a radius of 200 meters to closed waters ( within the meaning of Article 2 (1) (1) and (2) of the Fisheries Act). In the other federal states, the gray heron is spared year-round, which means that a single permit from the lower hunting authority is required for a shooting.

Once you have watched these beautiful animals a bit more relaxed, hunt will almost take care of itself. And the pond owner can protect their water surface and thus living koi carp relatively easily by spanning with nets. Also, the tendering of riverbanks by means of wires is a protective measure that prevents the gray heron from entering the shallow water zones.

Perhaps the simplest solution is indeed the best: preserving the natural habitat.