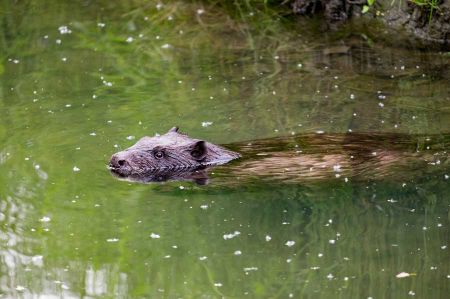 On the way for a walk along the Unstrut river from Roßleben to Memleben, we came across gnaw marks on the bank that only beavers can create - gnaw marks on the willows and alders and corresponding shaving-like wooden pieces on the bottom.

Although the local beaver had taken on a little too much, because this specimen could not fell the mighty alder.

It is precisely the felling of trees that has put the beaver in such a bad light within people's habitats: Beavers damage forestry. Although they mostly use younger trees, some mature trees are actually gnawed or even felled. If the tree species are financially interesting from a forestry point of view, the damage can be considerable, according to forestry in the past. Just as if the monocultures of the same forestry had not caused much greater damage. 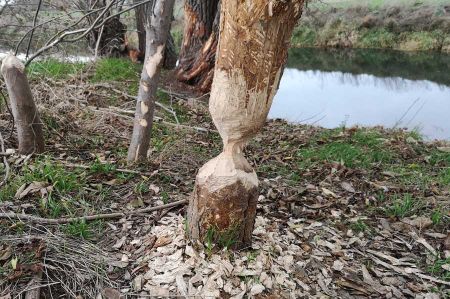 The beaver had disappeared from Thuringia and Saxony-Anhalt for more than 400 years. Just the place names like Bibra im Grabfeld, Bibra bei Kahla, Bad Bibra, Bobeck, Bebra and Biberbach prove that the strong rodent was once at home here. Reckless hunting in the entire distribution area was his undoing due to the damage allegedly caused by him:

The damming of bodies of water leads to flooding at the edge of the water. Spruce monocultures are sensitive to waterlogging and can therefore die. Dams built by beavers near the street or on underpasses can lead to undercutting.

Sometimes caves are built in flood protection dikes. In the event of a flood, these lead to unstable dikes and, in the worst case, to dike breaches. The problem can be avoided by taking suitable measures at the endangered areas.

In the summer months, the beaver also uses field crops (sugar beet, corn) near the water. Eating damage in fields has been reported several times. 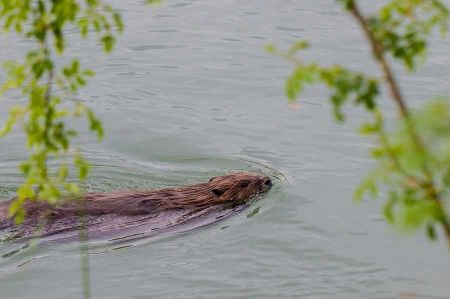 Today the beaver is no longer hunted but has other problems to contend with: rivers and waters have been made navigable, diked and straightened. The floodplains have been developed and built on, and some are intensively cultivated.

Today the various organizations take care of the repopulation by the beaver, so the NABU works out measures to improve the habitat and to minimize hazards. Waterfront residents and managers, hunters, anglers as well as farmers and foresters are shown proven ways to live and work with the beaver without conflict.

The beaver also reached the Unstrut-Hainich district in tentative steps. In all of Germany there are said to have been over 100,000 animals until they were almost exterminated by humans on the hunt for fur, meat and the beaver horn used as a remedy.

Webbed feet and a leathery tail - a perfect aquatic animal 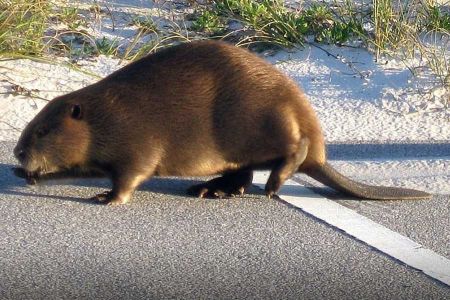 With its spindle-shaped body, a broad, flattened, hairless tail covered with leather-like skin, called a trowel, and webbed feet, the animal is perfectly adapted to life in the water. The scoop serves as a control when diving as well as for temperature regulation and as a fat depot. When diving, the nose and ears are closed; beavers can dive for up to 20 minutes.

Beavers colonize rivers of all sizes, from first-order rivers to drainage ditches. It can also take on all forms of still waters, from ponds or oxbow lakes to lakes. If there are only inadequate habitats available to it, the beaver is sometimes very adaptable and also settles in unusual places, for example in the middle of towns or directly on highways, where woody plantings are often the most important source of food. 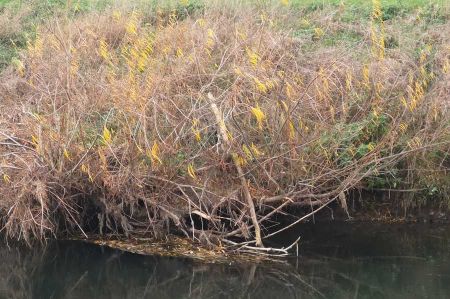 In the beaver castle, the old beavers live with up to four young, often with young animals from the previous year. The hairy and sighted offspring is born in May; the previous year’s boys must have left the den before that. The young beavers are initially afraid of water but are simply thrown into the water by their mother and thus get used to life in the water.

The beaver is a pure herbivore. It prefers herbs, shrubs, water plants and deciduous trees such as aspens, alders and poplars. From the trees it felled it consumed the twigs, the astringent and the leaves. However, it is actually a plant-based omnivore, it also feeds on grasses and reeds.

The beaver is crepuscular and nocturnal. When cutting down it uses an "hourglass technique"; the wood is gnawed in the shape of an hourglass until the tree falls. Depending on the hardness of the wood, a beaver can fell a tree up to 50 centimetres thick in one night.

The beaver structures consist of residential buildings and beaver dams, some of which are dug into the ground close to the shore, some of which are built from building material that has been dragged along: loose branches, twigs, stones, mud and trees felled by the beaver up to a trunk diameter of 80 centimetres. 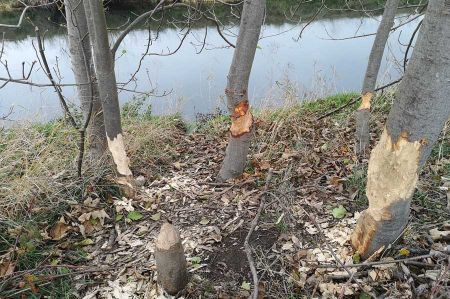 The entrance to the living boiler is always below the water level, the living boiler itself is above water. The living space inside can reach a diameter of up to 120 centimetres and a height of up to 60 centimetres. If the embankment is steep enough, the beaver digs a cave into it and connects it with beaver tubes. These can be feeding tubes, escape tubes and play tubes. If there is a residential building in the beavers dam or in an island-like structure completely surrounded by water and made of suitable building material, one speaks of a beaver castle. If the residential building falls dry, it will be abandoned, as enemies will then have easier access.

Beavers are known for their dams, which they use to dam streams and even create artificial ponds. The dam primarily helps to ensure a water level above the entrance to the residential building of as much as 60 centimetres and a secure water area around the castle. Beaver dams in flowing waters are threatened with being swept away during heavy rainfall. Beavers can open their dam to allow floods to drain more quickly and thus protect their dam. In this way they regulate the water level of their water area and thus enable more sensitive aquatic plants to thrive in the pond, which can serve as food for the beaver. Beaver dams require constant expenditure, especially in rivers.