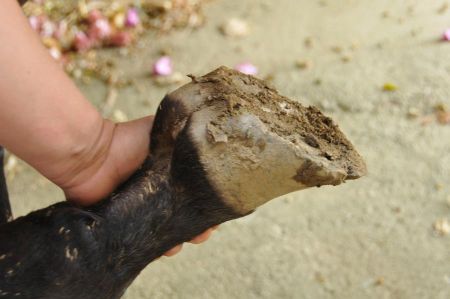 It's been forty years since we last saw a blacksmith at work. We can no longer say with certainty where exactly that took place in Germany.

Only that it was always a real event when the blacksmith came to the farm, that immediately penetrated back into one's own consciousness. The shoeing of horses with horseshoes used to be an everyday business, yes, the profession of "farrier" itself was a real learning and training occupation with a four-year training period. Rare today, we are now watching the blacksmith, who came all the way from Antalya, here in Alanya on the Turkish Riviera at work on two riding horses.

The blacksmith today a special qualification 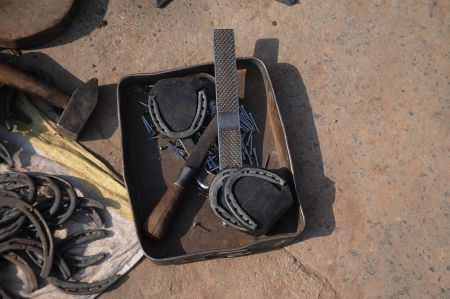 In Germany, blacksmithing is now considered a special qualification in the metalworking trade. Other special qualifications are hoof technicians, hoof orthopaedists, hoof carers and even hoof naturopaths. All of these latter directions are not regulated by law, so anyone can call themselves that. As already expected, when we asked about the special orientation of his training, he only shrugged his shoulders. "Learning by doing" is the motto in Turkey, only a few craftsmen have really learned their trade in the true sense of the word. In some places there is training that is comparable to that in Germany, but the majority of people continue to learn on the "construction site" in day-to-day events. Well, it doesn't have to be bad from the start. 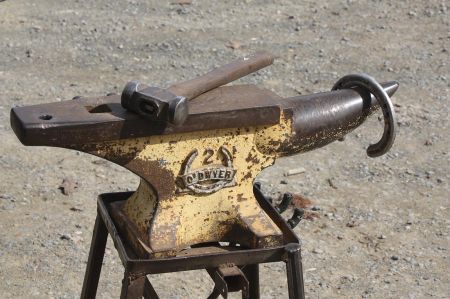 In the tradition of the blacksmith, the horse's hoof was first trimmed, the horseshoe made, adjusted and nailed on. It was not uncommon for the work, e.g. B. due to the loss of a horseshoe, were only carried out on one hoof. Today, as a rule, one no longer only takes care of one hoof or all four hooves, but of the whole horse, because a multitude of influences can be decisive here: Use of the horse, anatomical peculiarities, riding style, previous illnesses of the limbs, etc. All of these factors play a major role in the choice of hardware. Due to these expansions, only authorized blacksmiths are allowed to work on horses' hooves today. Even on your own horse, the owner is no longer allowed to work on the hooves. 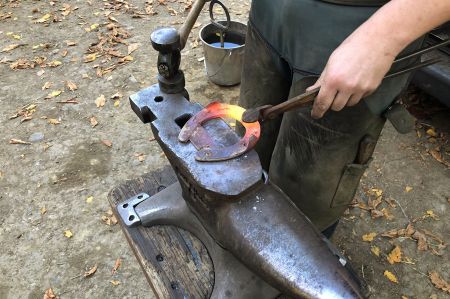 When horses are used to work vehicles as draft horses, or when horses are used for riding on hard ground, hooves wear out faster than they can grow back. This is where the farrier's field of work begins. Since the growth process of the hooves does not stop when the horseshoe is attached, the horseshoe should be removed at regular intervals and the hooves cut out. Horses used little for work or riding horses that are only ridden on soft ground do not need horseshoes.

However, here, too, the specialist has to regularly trim the hooves. Of course, free-roaming horses, like the ones we saw on the Yaila in Ibradi, don't need horseshoes either. 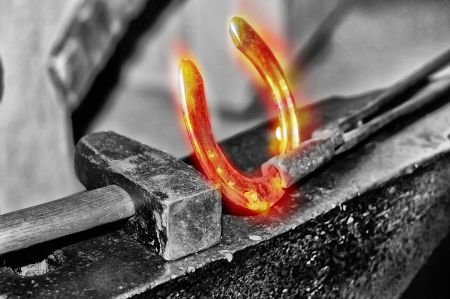 Our farrier from Antalya first removed the old horseshoe and the nails that went with it. The hoof is now pinched a little with pliers, then the hoof sole is smoothed and cut out with a hoof knife. Now our blacksmith removes small bumps on the sole with the help of a rasp. In the next step, the blacksmith places the iron he has brought with him on the underside of the hoof and the horseshoe is slightly adjusted using a hammer and anvil. Our farrier already knows both horses and probably also knew roughly the shape and form of the hooves, so little adjustment work was necessary. We could also remember work where the horseshoe had to be additionally deformed or forged by fire. Under no circumstances is a still glowing horseshoe "burned" onto the hoof.

Whether the blacksmith knows his trade. 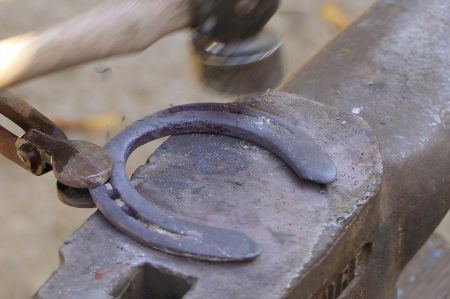 However, there is a process called hot fogging. Here the horseshoe is actually heated up after the shaping process and then fitted onto the hoof. However, this procedure is only used in exceptional cases today, e.g. B. small bumps on the supporting edge of the hoof are to be removed.

However, the process of hot shoeing allows the farrier to accurately control the nail holes, which must line up exactly with the white line of the hoof, as small imprints form in the hoof. Hot shoeing, if done correctly, does not cause any pain to the horse as only the surface of the horn gets hot. It is therefore really crucial whether the blacksmith knows his trade.

Processing with a nail arrow 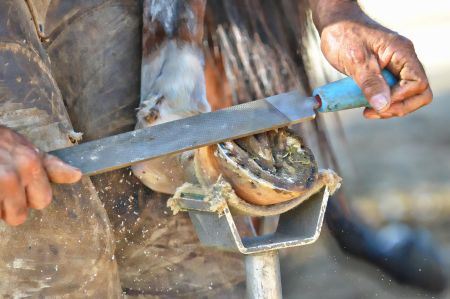 After all these preparations, the horseshoe can now be attached to the outer edge of the horn part with nails. With the so-called shoe hammer, nail the white line through the bearing edge of the hoof so that the nails come out of the hoof wall above the bearing edge. The overhanging end of the nail is then clipped off. Some hoof horn is then removed from under the nail stump with the hoe or with a rasp in the form of a hollow, into which the nail stump can then be sunk with the help of rivet pliers. The finish is then processed with a nail arrow, which should remove all protruding edges.

Today, in addition to the tried and tested iron horseshoes, those made of aluminum alloys and plastic are also used. Especially in racing, horseshoes made of plastic have become established due to the weight savings and a certain damping effect. The circulation in the hoof should also work better when using synthetic horseshoes. The experts see another advantage in the horse's more direct contact with the ground, so that better contact is maintained.

Whether due to the skillful hands of our blacksmith or the real peace of mind of the horses, in our case the whole horseshoe event was completed relatively quickly. Both horses didn't show the slightest tension, which was mainly due to the skill and the words of the farrier, who always spoke to the horses, very calm and relaxed.

The Viaduct of Aspendos next to Side