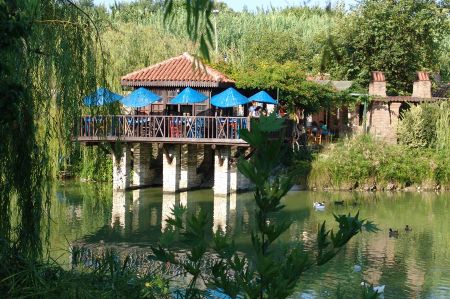 Davutlar is a small town very close to Kuşadası  in Aydın Province. It lies at the north of the Dilek Peninsula and to the south of Kuşadası.

The original settlement is only a few kilometres away from Aegean Sea side and the presently new quarters of the town are established at the sea side as summer resorts. The distance to Kuşadası is about 9.3 miles and to Aydın is 34 miles. In 2012 the population of Davutlar was 9.484 registered people. Davutlar can be reached by local bus services. It is a small, sleepy town with a charming combination of green pines and olive trees.

The town is famous for its fragrant fruit and vegetables, hot springs and thermal baths with their beneficial effects.

The area around Davutlar was once ruled by Carians, later on by Ionians, by Lydians and by the Empire of Achaemenid. The battle of Mycale (in 479 BC) was fought close to the city borders of Davutlar. Later the area was ruled by Alexander the Great, by the Kingdom of Pergamon and by the Roman Empire. The first Turkish principality was founded in 1090s by Tanrıbermiş. During late 13th century the Aydınoğlu principality dominated the area and finally in the 15th century the area was annexed by the Ottoman Empire. The exact foundation date of the settlement is still not known. During the last years of the Ottoman Empire Davutlar But was a growing town cause it was enriched by refugees from Caucasus (mainly Circassians) after the Russo-Turkish War (1877–1878), as well as by people from Crete following the revolt in Crete in 1896 and from various Balkan countries following the Balkan Wars (1912-1913).

Today Davutlar is famous for its horsefarm and horse activities.

Aphrodisias - the famous sanctuary of Aphrodite