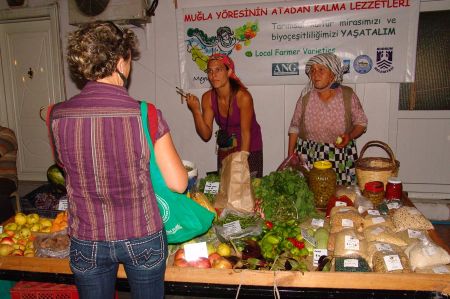 Heritage varieties reflect our rich cultural diversity. Their names alone are a fascinating store of folklore, humour and the descriptive power of language.

The "Thieves Don't Steal" Melon (so-called after its deceptively unappealing appearance), the "Fox Chasing" Pear (which foxes are reputed to enjoy) are just two examples of many such interesting fruit names encountered all over Turkey.

Many references in historical and early 20th written sources to traditional fruit varieties that are no longer available in city shops and supermarkets prompted food historian Priscilla Mary Işın to wonder if any of them were still being grown in rural areas of Turkey. In the summer of 2006 her daughter Esin Işın began combing villages and local markets in the province of Muğla in search of heritage fruit varieties.
The province of Mugla, as a foremost tourism destination is under serious environmental pressure, has been chosen as our pilot region.
Nevertheless, there is sufficient evidence of a high level of diversity for certain species in the region to fully justify the choice of Mugla as our pilot region.

Five women of different occupations and interests got together to form the Fruit Heritage Working Group and began field studies in Muğla in April 2007.

“Like most other initiatives aimed at preserving the natural environment and nature friendly agricultural practices in Turkey, we hope that people in other parts of the country will follow suit in forming similar voluntary groups.”

The first step in our fruit heritage conservation project was to draw up an inventory of surviving heritage varieties. The second step was collecting samples, taking pictures, and creating a database containing the detailed information about every variety collected in the course of a systematic field study. In the next stage we plan to propagate endangered varieties, enhance public awareness by means such as visiting local schools, undertake genetic analysis of each variety, register them under their local names, and investigate potential marketing methods.
Setting up a model appropriate for applying to other regions of Turkey is an important aspect of this pilot project.
If we wish to conserve our fruit heritage, it is a matter of urgency to spread awareness of the value of these traditional fruits still growing in the gardens and orchards of small farmers in rural areas, and restore their economic value.
The Fruit Heritage Working Group
www.fruitheritage.org

Have you ever heard of fox tale grape, salty pear, dog lifting fig, lead plum? These are but a few of the hundreds of traditional fruit varieties of Mugla.

Even though Turkey is very rich in terms of fruit variety and fruit growing holds a special place in its history, we are losing this wealth day by day. From past to today, fruit varieties are an important part of our agricultural bio-variety and our cultural heritage. Because these fruits were selected and developed with the hundreds years of effort by humanity. Traditional varieties that are produced and adopted in an area adjust themselves to the climate, soil and water of that area. For this reason, most of them don’t require watering, fertilizer and pesticide, therefore they are mostly ecological products. In this respect, we can understand from the numbers given below, which may look exaggerated, that Muğla has a very important heritage. Within the scope of the “Local fruit of Muğla: cultural heritage, database and conservation project” that we have been conducting for 3 years,  nearly 550 ancestral fruit varieties including many types such as granatum, olive, mulberry and citrus as well as 125 pear, 97 fig, 90 grape, 82 almond, 30 apple, 18 plum varieties have been recorded to date.

“Ancestral Tastes of Muğla Region” stand is being established in Bodrum Friday Bazaar
Our traditional varieties, some of which are attractive and some of which are not even tried because of their appearance although they can have good and different tastes, need to remain in our lives so that they can survive and do not die away. Our stand, where our region’s ancestral agricultural product range will be introduced and sold together with the farmers setting their heart on conserving this heritage of ours, has started being established every Friday as of 5th June. The aim of this stand, where our local farmers exhibit their own products, is to demonstrate richness of our region to our people and domestic and foreign tourists, to inform them about the diversity we have, to encourage them to consume these ancestral products and thereby, conserve this diversity.