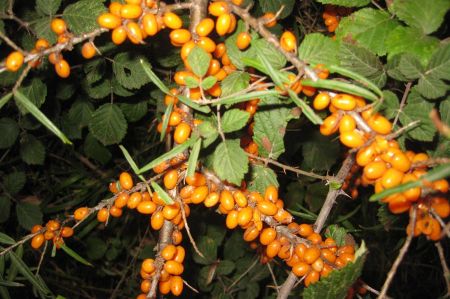 It is from the species of hippophae, a bush or tree type which is forked, thorny and sheds leaves in winter. It is generally between half a meter and 6 meters, rarely it may reach 10 m. high. Its leaves are lanceolate, 3-7 cm’s long, narrow, alternate, gnarled, its upper part is grey - silver colored.

Its sprout and buds are are covered with silver and bronze colored feathers. Its buds, which are covered in a few scales, have a small and round structure. Its small yellow flower are seen in spring before leafing.

Hippophae rhamnoides, which has a high light requirement, exhibits a more common form rather than growing in tree form on poor soil rather than on fertile land. It grows easily in mountainside, rocky, inclined and sunny aspects. Hippophae rhamnoides can endure hard climate conditions, sea wind and salty water effects. Because it develops a dense root system, it is an ideal plant for preventing soil erosion.
The most valuable part of Hippophae rhamnoides plant, which contains a lot of material that is used in food, pharmacology and cosmetic field, is its fruits; they are soft, watery but also sour and may leave an undesired taste in the mouth. Its fruit is used while making pie, jam, fruit juice, liquor and skin cream. It is possible to make tee from the leaves of Hippophae rhamnoides, as well as animal feed, pulp and seed sediment.

Conducted studies show that this plant contains “functional food”, meaning it is “nutritional, protective from diseases and therapeutic”.

Hippophae rhamnoides  fruits are materials that have polyvitamins. The fruit is rich in terms of carbohydrates, protein, organics, amino-acids and vitamins and it supports immunity system. It provides resistance against diseases like flu and cold. Also, it is known to be useful for curing skin and digestion system diseases and is extensively used in this area.

It is one of the 3 products, along with fig and olive, which provides the most influence for cell regeneration.
This plant is mentioned in the Epic of Gilgamesh, and it is thought to be used in medicine as well as for feeding horses and armies.