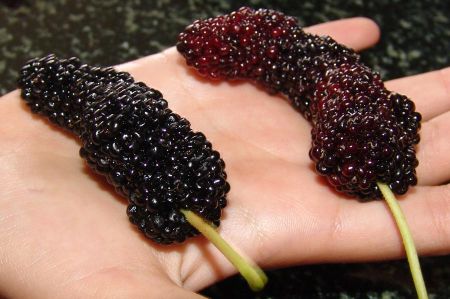 Like often before we were going shopping at the weekly market in Cikcili / Alanya to buy couple of  fruit and vegetables for the coming days.

On the very first stand already we found couple of  fruits of the current season, between them the black mulberries (Karadut) offered in small plastic bowls and bought by many customers in the intention to consume on site. Aromatic and juicy - however strong staining what pleasure must do no harm. 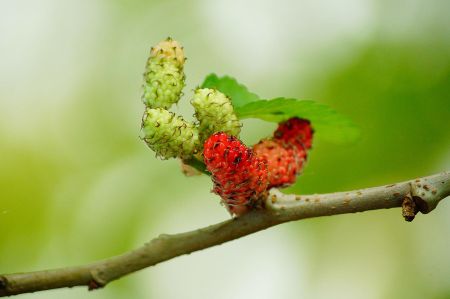 In appearance similar to blackberries, but usually much longer in shape, mostly black mulberries are locally available here, less often red and barely white mulberries that although taste considered fade. Ripe harvested mulberries are very sweet and juicy, very aromatic and of intense of flavor. What exactly is the main trade problem of mulberries. Once ripe, the fruits fall from the tree and are already so soft, that they burst easily and thereby have a strong reddish discoloring with their juice. They are therefore hardly to manage during transportation, even for market stall. Immature harvested lacking the flavor and sweetness. Blessed is the man to call a mulberry tree its own and the fruit can directly enjoyed from the tree.

Here in Turkey we tried some trade at the market still operates with mulberries. Since the fruit on the tree, they can not be harvested at the same time. Most spread over several weeks, tarpaulins or cloths are placed under the mulberry tree and fall by shaking the tree, the ripe fruit fall down while still green and unripe fruits remain on the branches. 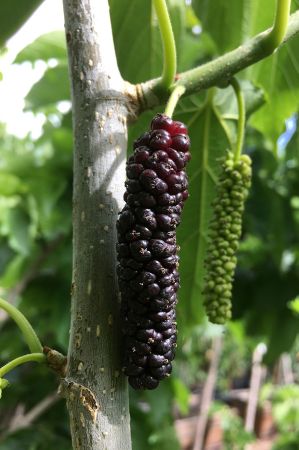 From history we know that the Romans cultivated the mulberry tree and took care of the distribution in the warmer regions of Europe. Suitable are almost the regions, which are also suitable for the cultivation of wine. Even in the "Metamorphoses" of Ovid, mulberry trees are mentioned. In the mythology of "Pyramus and Thisbe" is reported that the juice of mulberries was initially white, but be permanently discolored red by the blood shed Pyramus under the trees.

Here mulberry trees were originally not been primarily used because of their fruits, but the green leaves of the white mulberry are the food basis in the breeding of the silk moth and are therefore an absolute requirement in the production of silk. Here the reason for the strong interest must be seen, which was the reason for the Romans to spread the culture.

Even in cooler Germany they tried to grow white mulberries in alleys at times of Prussia kingdom, planting in marketplaces and in schools, which should serve the sericulture. Only with the import of cheap silk imports from Southeast Asia sericulture was ousted from Prussia again, so also the mulberry trees largely disappeared. 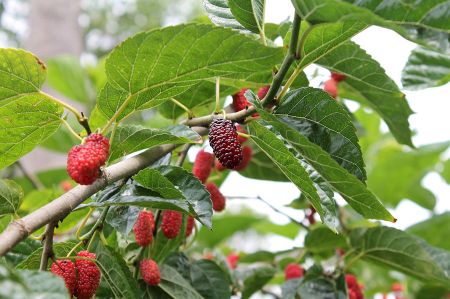 In Zernikow (in Ruppiner region between Gransee, Rheinsberg and Fürstenberg), an initiative led by Dr. Ines Ronne trying to get some mulberry avenues to remind the history of sericulture for obtaining silk in Prussia. Together with many volunteers, each year hundreds of kilograms of mulberries are harvested, which are then boiled down to jam and sold for the purpose of maintenance and preservation of the mulberry avenue in Zernikow.

Mulberry trees can reach stature heights  up to 6-15 meters high, often you will find mulberries as bushes. Especially the wood of white mulberry is also appreciated in wood processing, as it is very durable and well polished. Thus one uses the mulberry wood in Turkey but also in the Persian-speaking world, for the production of high quality musical instruments such as the saz, the baglama and cura, plucked instruments, require a sound body.

Kara Dut or black mulberries and also red mulberries are hardly planted due to the strongly coloring fruits in public facilities, despite the higher frost resistance of white mulberry. What there is use them as delicious fruit right from the tree. So in the parks and gardens there are more ornamental forms of white mulberry kept. Here is another advantage of the mulberry because even very young trees carry large quantities of fruit.

Slowly the dried fruit of the mulberry tree prevail in Europe. In taste reminiscent of raisins, the taste is missing. However, the fruits lose, when drying, their great color, almost transparent and rough in the surface of their skin. In the form of syrup, the juice of mulberries is now used for some refreshments. Due to the high content of minerals such as calcium, magnesium and potassium, as well as a variety of vitamins, mulberries are a healthy and delicious sweet tooth, both in raw and processed form.

Here is a recipe for making mulberry jam: 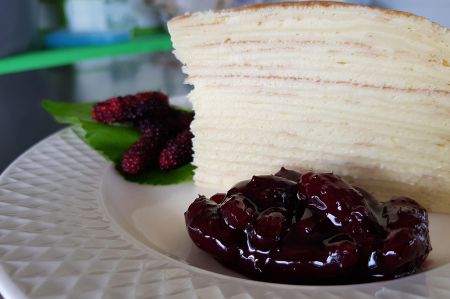 preparation
For jam, take the ripe fruit of the mulberry tree. Jars for canning must always be sterile, the glasses are successful light-boiled.
Wash the fruit, remove the stalks. At least let them cook for half an hour, then add the lemon juice and preserving sugar. Cook three more minutes bubbly and then fill equal to the brim in boiled jars.
Then close the lid, screw and put the glass on the head.

Pronounced tastes good jam when mixing the mulberry fruit with blackberries or currants, because these have more fruit acid and complement the outstanding taste of mulberries.

Plant sculptures at EXPO 2016 in Antalya