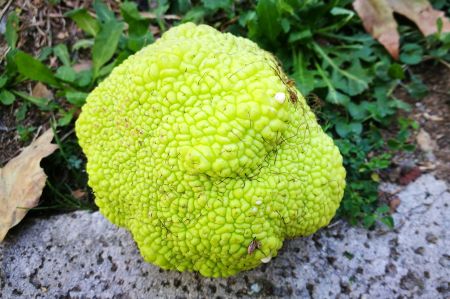 Already last year we had noticed strange green balls on the ground in the immediate vicinity of the White Tower, which seem to be kind of green tennis balls on first view.

When looking upwards, it became clear that they were the fruits of a tree, and despite of knowing the original name, we called it the tennis ball-tree. During the current tour, another name came up, which also contained a certain resemblance: the broccoli tree. The time was right for the clarification of the real name.

Fortunately, we were able to upload some photos to the facebook page of Dr. Robert Krickl Nature-What? Where?, which quickly helps with competence in questions when it comes to nature. At the evening already there was a research result:

Maclura pomifera is a deciduous tree that grows up to 15 meters in height and has a diameter of up to 12 meters. The bark is dark brown and cracked. The thorn-resistant branches form an open and irregular tree crown. The leaves are oval and dark green. The original distribution area of ​​the Osagedorn in the border area of ​​Texas, Arkansas and Oklahoma which was the settlement area of ​​the Indian tribe of Osage, from which the tree was named. As a material for the production of arches, the wood was traded by the Indians beyond the natural spread. Osagedorn is an excellent wood for the production of arches because the yellow sapwood is extremely tough and tensile and the brown heartwood is very pressure-resistant, similar to the yew used for the English longbows. The Osagedorn is still popular today (besides the yew tree) in the traditional arch construction as one of the most powerful woods, but due to its irregular growth it is quite demanding in the processing.

Osagedorn served as a "living fence post" for the cattle pastures of many farmers as the prickly branches can form impenetrable hedges. This practice ended with the introduction of the barbed wire. The wood is still used today for posts and fence piles, since the core wood is resistant to pest and weathering. In 1804, Lewis Meriwether sent cuttings to Thomas Jefferson, the then president. Since then the milk orange tree has been planted throughout the USA.

The milk orange tree is now introduced and spread in Central Europe from Scansano (Tuscany, Italy) and in Croatia. It was planted as a fence or path attachment. Otherwise it is planted in Central Europe as a road and park tree. The Osagedorn was cultivated very frequently for windbreak belts in Western Hungary (besides the pseudoa caky).

The milk orange tree begins to bear fruits at the age of 12 to 15 years. There are wrinkled and light green fruit clusters made of solitary stone fruits. These stone orchids are similar to apple trees, initially green and spherical. The mature fruit plants can reach the size of a smaller melon with a diameter of 7 to 15 centimeters. The fleshy fruits are initially green, but become yellowish green when they mature between September and October. The fruits weakly smell like oranges. In Central Europe, however, they hardly reach their maturity. They contain a bitter milk juice, which causes the fruits to turn black when dried.

The fruit is today only broken by gray squirrels to get to the seeds. Only a few other species living in North America use the fruits as food. This is unusual, since plants normally produce fruit-bearing because they use the digestion (endochory) as a propagation strategy. In the case of the milk orange tree, it is assumed that the fruits were eaten far before modern times by the prairie mute, the mastodons and giant crops thousands of years ago. This American Megafauna died at the end of the last Ice Age.