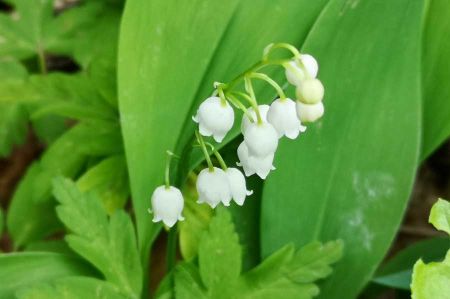 The wonderful May air with blue sky, light wind and the smell of blooming greens invited us to take long walks. Especially if someone loves nature, the different scents in the air are worth every walk.

After the strong scent of wild garlic, it is now the small, delicate lily of the valley that exudes its scent. Unfortunately, quite rare, we were lucky enough to discover some places on the edge of the forest in Billroda that were densely populated with lily of the valley. You are inclined to pick a bouquet right away, but caution is advised.

Lily of the valley - all parts of the plant are poisonous! 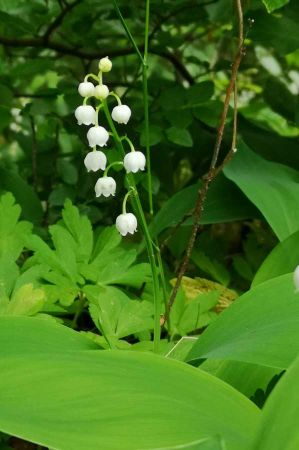 The lily of the valley is classified as very strongly toxic by experts, whereby all parts of the plant are toxic, but especially the flowers and fruits. Studies have shown 38 glycosides in the plants, which can be derived from 9 aglyca. The symptoms of poisoning are correspondingly diverse: Skin and eye irritation can occur when there is external contact with the plant. When ingested through the mouth, nausea, diarrhea, irregular heartbeat, dizziness and chest tightness may occur. First there is high blood pressure and a rapid pulse, later reduced blood pressure, very slow and deep breathing and finally cardiac arrest can even occur. After eating one to five berries, at most short-term sinus arrhythmias have been observed, mostly no symptoms. Larger quantity, ......, so caution is definitely appropriate.

Children are particularly at risk from berries, flowers and leaves. When ingesting parts of the plant, be sure to consult a poison control centre or a doctor. With the leaves of the lily of the valley e.g. wild garlic confused when collecting, whereby the typical garlic smell of wild garlic makes the clear difference normally. 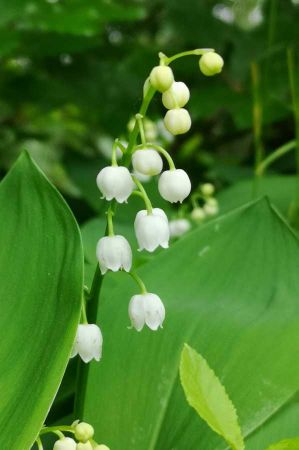 The lily of the valley usually shows two to three leaves that spring directly from the roots. Between March and June, five to ten nodding, broad-bellied flowers develop in a more or less racemose inflorescence. Each flower stands above a membranous, 4 to 20 mm long, lanceolate bract, which is about half as long as the 5 to 11 mm long peduncle and envelops it at the base. The flowers of the lily of the valley are characterized by the characteristic, intensely sweet fragrance, which is used to attract potential pollinators. The aromatic aldehyde bourgeoned is decisive for the fragrance note.

The lily of the valley is widespread in almost all of Europe up to the Caucasus. In southern Europe, its stocks are usually limited to mountainous areas. Other species of the genus Convallaria are native to East Asia and North America, cultivated forms of the lily of the valley, such as e.g. the pale pink flowering variety 'Rosea' are common worldwide.

The lily of the valley prefers summer-warm climates and partially shaded locations. It thrives on both lime-rich and acidic soils. In very shady forest areas, the plant often only forms leaves, but no flowers. The spread here is predominantly vegetative via the roots. The lily of the valley sprouts on gauze soil and relies on root fungi.

The socially growing lily of the valley is considered a class character of the beech and deciduous oak forests in Europe. It often forms dense stands in dry to slightly damp, light deciduous forests, especially in beech and oak forests of medium biodiversity and light pine forests.

Lily of the valley as an ornamental plant in the garden 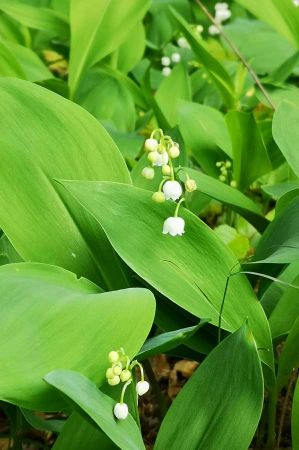 Despite its toxicity, the lily of the valley is often used as an ornamental plant in the garden, especially for groups of trees and shady borders. It partially prefers shaded locations. The experienced gardener recommends a compost pad in autumn.

The lily of the valley is also grown as a cut flower and potted plant. In the case of vegetative propagation by dividing the rhizomes, it should be noted that only leaves are formed in the first year when the "eye" sprouts; the flowers only develop in the second year. Lily of the valley can also be found in many parks and gardens.

The city of Drossen (today Ośno Lubuskie, Poland) was known as the "May Flower City" until 1945 because of the lily of the valley breeding there. Today's well-known growing area is the Samtgemeinde Elbmarsch near Hamburg.