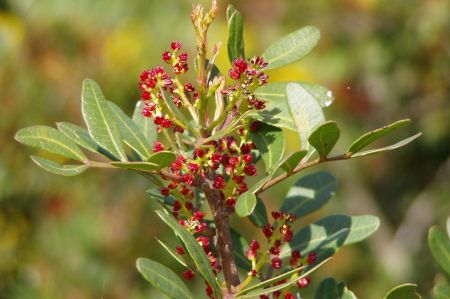 We were traveling with our friend Ricky from Izmir on the Çesme Peninsula when we drove into the town of Alaçati during lunchtime. In addition to the obligatory tour of the town, we also wanted to have lunch here.

Although Ricky was born in Italy, he has lived in Izmir since he was a child and is therefore very familiar with the region. Since he often travels with partners from Europe for business reasons, his knowledge of the local gastronomy, especially the excellent local fish restaurants, is correspondingly good. So we went purposefully into one of the first houses on the square, which had a beautiful, Greek-style inner courtyard hidden behind high walls. Immediately there was a feeling of warmth, culture and security.

From a biological point of view, the mastic tree belongs to the group of pistachios 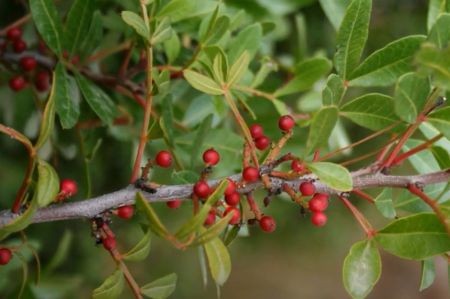 We were still quite enchanted by the many assessors who filled the walls and niches when we noticed two strange trees between the tables that, at least I had never seen before. Of course, curiosity was aroused immediately and I went closer to the tree. I immediately noticed a whitish shimmering mass that protruded from the bark of the tree and was sticky to the touch like tree resin. The first smell test clearly said something different, more reminiscent of chewing gum or even dental care products. Our interest was immediately aroused, which was also noticed by the owner of the restaurant, who hurried over. His first concern was probably to greet his regular guest, but he also immediately began to explain the tree and the protruding tree sap.

From a biological point of view, the mastic tree belongs to the group of pistachios (Pistacia lentiscus L. var. Chia), but is surprisingly rare here on the Çesme peninsula. But more on that later. It is slightly scratched in June so that the tree begins to take care of itself to protect itself from injury and tries to seal the wound with its resin. As far as actually known from other trees, especially the conifers. Then, as the resin rises to the surface and comes into contact with oxygen, it hardens, sealing the injury. Nothing fundamentally new either. However, if you then break off the resin from the tree, the fracture zone shows a clear, drop-shaped soft resin that appears quite inhomogeneous.

The main components of mastic are about 40% resin acids, about 50% resins and 2% essential oils, along with other ingredients. Science has now found that there are more than 70 individual components in mastic. And among them are a number of substances that are used in medicine, because mastic has proven antifungal, antiviral, antibacterial and antimicrobial effects. So it's no wonder that our friendly restaurant owner recommends that we put the finger that touched the noble resin in our mouths in order to taste it. In medicine, mastic is used for stomach problems, stomach ulcers, heartburn, inflammation of the gums, periodontal disease, acne and pimples on the skin, rheumatic complaints and in the treatment of wounds. Being an antioxidant, modern research also likes to point out that mastic gum is also quite effective and helpful in treating certain types of cancer, such as stomach cancer, leukemia or prostate cancer, although research here is still in its infancy.

Mastic is also widely used in the food industry: 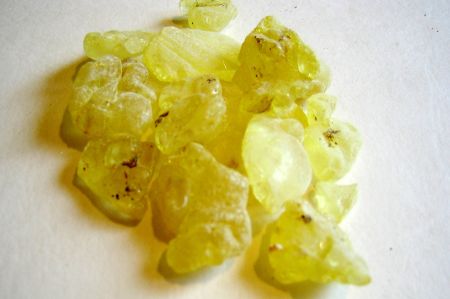 - for food (chewing gum, baked goods, lemonade, sweets loukoumia, raki, etc.)
- as natural cosmetics (antiaging effects, soothes and cleanses the skin) and body care products (toothpaste, face cream, shower gels, soaps, etc.)
- as an adhesive for makeup artists (artificial beards, warts, etc.)
- as final varnish for oil paintings
- in tempera painting as an emulsion component
- as part of the violin varnish (violin making)
- as an adhesive for glass, porcelain or pietra dura
- as an acid-resistant medium for etching
- as incense, which then also smells slightly of pistachios.

Mastic resin already starts to soften at 40°, so you can start moulding it at body temperature. At 80° it can almost be described as "rubbery" and at 100° it already starts to melt. The mastic resin dissolves very quickly in turpentine oil and in alcohol, if you try to dissolve it in petrol, residues remain. It is precisely this dissolvability in turpentine oil and also in alcohol that has been used in painting and surface sealing for centuries. Since the mastic dries even harder than dammar varnish, it is also used in oil painting and in the surface treatment of wood.

Mastic is already mentioned in the Bible as a remedy, please compare Gen 37.25 EU and Gen 43.11 EU, the pistachio resin imported mainly from Chios was considered the best in ancient times, long before the Bible. The peripatetic Theophrastus of Lesbos, who lived between 371 and 287 BC, later Pliny the Elder (23 – 79 AD) and Dioscorides (first century AD), who is still considered one of the most capable pharmacologists today, also described the chewing gum-like resin its extensive properties. Often harvested as a single tree, the Pistacia Lentiscus var. Chia has been planted and harvested since 50 AD on the Greek island of Chios with its fertile marl soil.

Mastic ouzo and mastic liqueur were among the most popular drinks

Even with the Ottoman conquest of the island of Chios in the Middle Ages, mastic remained the basis of the island's prosperity. Mastic Ouzo and Mastic Liqueur were among the most popular drinks in the Ottoman Islamic Empire! It is remarkable against the background that people often struggle with wine production, beer consumption, etc. in modern Turkey today. Due to the prosperity of mastic extraction, Chios has always had a much higher population density than the other islands. And how important the mastic extraction was also considered by high politics is best shown during the Greek War of Independence between 1821 and 1829: although the inhabitants of Chios had always shown loyalty to the Ottoman Empire, the population was tyrannized at the time. During the so-called massacre of Chios, around 25,000 islanders were killed and around 45,000 more were sold as slaves. Those considered mastic farmers at the time were initially spared.

The different areas of application of the mastic resin after shipping are then interesting: 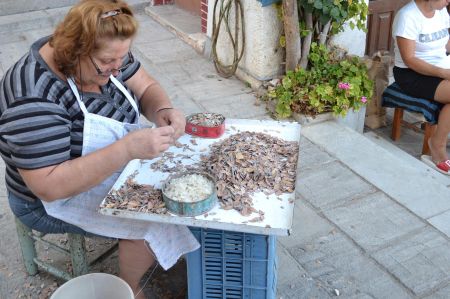 Today only the two villages of Pyrgi and Mesta are considered mastic villages, affectionately called Mastichochoria, which have been able to retain their original character. The production volume at the end of the 18th century was 100,000 kilograms; today it is around 300,000 kilograms, and its economic importance has not changed since ancient times. Despite recurring problems with fires, Chios also has about 2 million mastic trees, which alone produce 220,000 kilograms. It follows that around 10 trees are needed to obtain one kilogram of mastic, which makes the price of €85 per kilogram easy to understand.

As an evergreen, gnarled shrub, the mastic tree often only reaches 1.50 meters in height. Every five, the trunk is punctured in various places with small vertical incisions, causing it to bleed. The escaping juice hardens quickly and falls in the form of glassy drops on the floor, which is covered with cloths for the purpose. Here you can quickly see how complex the mastic extraction is. These drops are then collected, cleaned of coarse impurities with a knife and separated into different sizes by sieves. 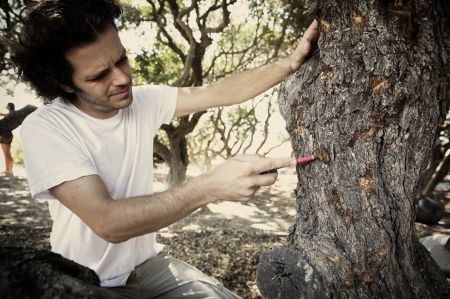 Even before the war in Iraq, 26,000 kilograms alone were sent here, as mastic was used as an additive in arrack schnapps. In some African countries, some sugar is simply added to the resin and sold as chewing gum. It is also used here to impregnate clothes. In China and India, mastic is used as an antiseptic to treat wounds, in the Orient as a spice in confectionery and cheese production. Small amounts of mastic lower blood pressure and cholesterol, which is why mastic is also considered a natural remedy. It is even used as an antidote for snake bites. There are other uses in the production of high-quality lacquers, adhesives, paints, perfumes, cosmetics, toothpaste, soaps and ointments. Whether as mastic liqueur, mastic-flavoured cakes or jams, whether as scented incense "Moscholivano" or in toothpaste, a true miracle from nature.

The eucalyptus tree is also spreading in the Mediterranean

Citizens' festival in Erfurt on the day of German unity