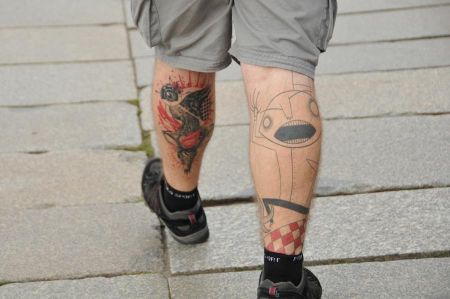 A tattoo is a marking made by inserting ink into the layers of skin to change the pigment for decorative or other reasons. Tattoos on humans are a type of decorative body modification.

Tattoo enthusiasts may refer to tattoos as "Ink", "Tats", "Art", "Pieces", or "Work"; and to the tattooists as "Artists". The latter usage is gaining greater support, with mainstream art galleries holding exhibitions of both traditional and custom tattoo designs. Copyrighted tattoo designs that are mass-produced to tattoo artists are known as flash, a notable instance of industrial design. Flash sheets are prominently displayed in many tattoo parlors for the purpose of providing both inspiration and ready-made tattoo images to customers.

Tattooing has been a Eurasian practice at least since around Neolithic times. Ötzi the Iceman, dating from the fourth to fifth millennium BC, was found in the Ötz valley in the Alps and had approximately 57 carbon tattoos consisting of simple dots and lines on his lower spine, behind his left knee, and on his right ankle.

Tattoos have served as rites of passage, marks of status and rank, symbols of religious and spiritual devotion, decorations for bravery, sexual lures and marks of fertility, pledges of love, punishment, amulets and talismans, protection, and as the marks of outcasts, slaves and convicts. The symbolism and impact of tattoos varies in different places and cultures. Tattoos may show how a person feels about a relative (commonly mother/father or daughter/son) or about an unrelated person.

Today, people choose to be tattooed for cosmetic, sentimental/memorial, religious, and magical reasons, and to symbolize their belonging to or identification with particular groups, including criminal gangs but also a particular ethnic group or law-abiding subculture.

The decoration of blues singer Janis Joplin with a wristlet and a small heart on her left breast, by the San Francisco tattoo artist Lyle Tuttle, has been called a seminal moment in the popular acceptance of tattoos as art.

The most common method of tattooing in modern times is the electric tattoo machine, which inserts ink into the skin via a group of needles that are soldered onto a bar, which is attached to an oscillating unit. The unit rapidly and repeatedly drives the needles in and out of the skin, usually 80 to 150 times a second. This modern procedure is ordinarily sanitary. The needles are single-use needles that come packaged individually. The tattoo artist must wash not only his or her hands, but they must also wash the area that will be tattooed. Gloves must be worn at all times and the wound must be wiped frequently with a wet disposable towel of some kind.

Prices for this service vary widely globally and locally, depending on the complexity of the tattoo, the skill and expertise of the artist, the attitude of the customer, the costs of running a business, the economics of supply and demand, etc. The time it takes to get a tattoo is in proportion with its size and complexity. A small one of simple design might take fifteen minutes, whereas an elaborate sleeve tattoo or back piece requires multiple sessions of several hours each.

Proper hygiene requires a body modification artist to wash his or her hands before starting to prepare a client for the stencil, between clients, and at any other time where cross contamination can occur. The use of single use disposable gloves is also mandatory. In some states and countries it is illegal to tattoo a minor even with parental consent, and it is usually not allowed to tattoo impaired persons, people with contraindicated skin conditions, those who are pregnant or nursing, those incapable of consent due to mental incapacity or those under the influence of alcohol or drugs.

Before the tattooing begins the client is asked to approve the final position of the applied stencil. After approval is given the artist will open new, sterile needle packages in front of the client, and always use new, sterile or sterile disposable instruments and supplies, and fresh ink for each session (loaded into disposable ink caps which are discarded after each client). Also, all areas which may be touched with contaminated gloves will be wrapped in clear plastic to prevent cross-contamination. Equipment that cannot be autoclaved (such as counter tops, machines, and furniture) will be wiped with an approved disinfectant.

Tattoo artists, and people with tattoos, vary widely in their preferred methods of caring for new tattoos. Some artists recommend keeping a new tattoo wrapped for the first twenty-four hours, while others suggest removing temporary bandaging after two hours or less. Many tattooists advise against allowing too much contact with hot tub or pool water, or soaking in a tub for the first two weeks. This is to prevent the tattoo ink from washing out or fading due to over-hydration and to avoid infection from exposure to bacteria and chlorine. In contrast, other artists suggest that a new tattoo be bathed in very hot water early and often.

Since tattoo instruments come in contact with blood and bodily fluids, diseases may be transmitted if the instruments are used on more than one person without being sterilized. However, infection from tattooing in clean and modern tattoo studios employing single-use needles is rare.

Wellness is a question of daily life-quality