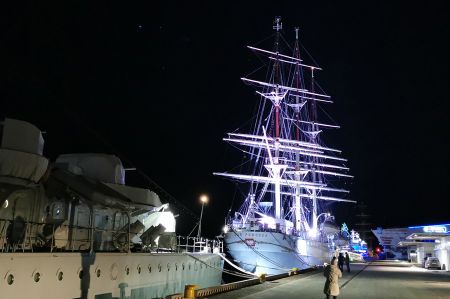 Despite the freezing cold and after a very good meal at the port of Gedingen, a short digestive walk in the port area should allow us to enjoy the further course of the evening.

It is also striking here that the majority of the small restaurants along the harbor promenade that we know of have long since fallen victim to renovation and new construction. Is that really a good solution? How nice it was to dine or just have a drink in the little taverns. But that's probably the way of things. Well, at least the Pomorza, the three-masted, former sail training ship, is interestingly illuminated as a still clearly visible highlight in the harbor (despite the freezing cold). 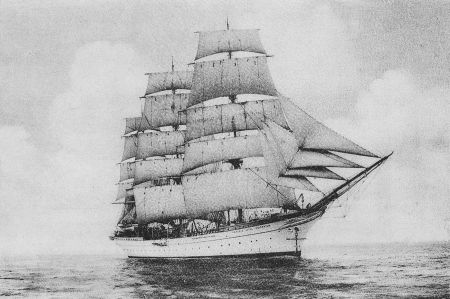 The sail training ship was launched on October 12, 1909 as "Prinzeß Eitel Friedrich", named after Sophie Charlotte von Oldenburg, the wife of Prince Eitel Friedrich of Prussia at Blohm & Voss in Hamburg and was launched in 1910 as the second new building of the German Training Ship Association as Sail training ship put into service for basic seamanship training. The home port was Oldenburg, which is hardly imaginable today due to the rather narrow access possibilities. Both the construction supervision and the subsequent maiden voyage took place under the direction of Richard Dressler. He remained captain of the ship until 1914.

The princess ended up in France as reparations

After the First World War, the ship was taken to Great Britain and then to France in 1920 as reparations. Renamed Colbert, it was intended to be available to the naval school at Saint-Nazaire, which however did not use it. It then became the property of the Baron de Foreste to replace a yacht lost in the war. In view of the high costs for conversion and maintenance to a sailing yacht, however, he offered the ship for sale in 1929.

Committee of the National Fleet in Pomorze buys the ship 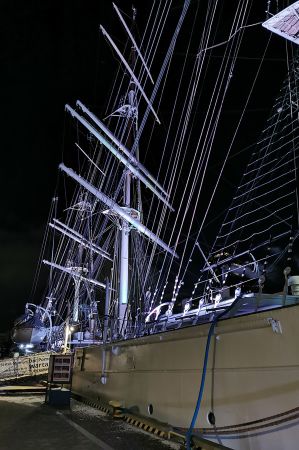 The Pomorze National Fleet Committee (Pomorski Komitet Floty Narodowej) bought the ship to replace the barque Lwów for the amount of 7,000 pounds sterling. This money came from a public collection in the Pomeranian Voivodeship. In 1929/30 the ship was towed to Nakskov (Denmark) as "Pomorze". The Polish government had the ship overhauled there and equipped with an auxiliary drive. On June 30, 1930, in Gdynia, the ship was renamed Dar Pomorza (“Gift of Pomerania”) as a permanent reminder of who made the ship’s commissioning possible. On July 13, 1930, the ship was handed over to the State Maritime School in Gdynia, not before the ship and its flag had been consecrated by the church. 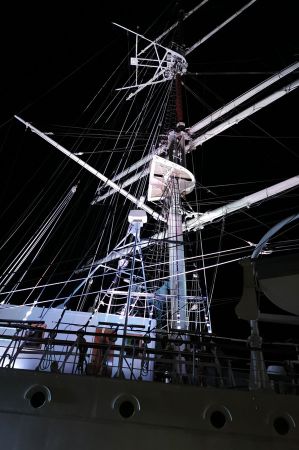 In 1934/35, the Dar Pomorza undertook a world voyage of 352 days and 39,000 nautical miles via the Panama Canal. In 1936, on the occasion of the 15th anniversary of the founding of the seaport of Gdynia, the Second Polish Republic minted two commemorative coins of two and five zloty respectively, depicting the Dar Pomorza. In 1936/37 a special trip was made to circumnavigate Cape Horn. During a voyage to the Baltic Sea, the ship left the port of Libau on August 24, 1939 for Gdynia. Because of the German invasion of Poland, the ship's command relocated the Dar Pomorza to Stockholm in neutral Sweden, where the ship remained for the duration of the Second World War. Only part of the permanent crew remained on board. 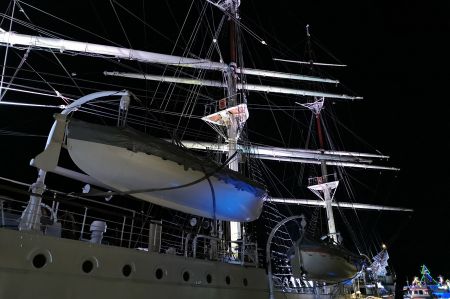 The rest of the permanent crew and the 149 students went to Great Britain to join the resistance against the Third Reich. After the end of the war, the Dar Pomorza returned to her Polish home port of Gdynia on October 25, 1945. In 1946 the ship undertook its first post-war training voyage. In the years that followed, the ship undertook numerous training trips as a training ship for the higher naval school for officers "Helden der Westerplatte". The Dar Pomorza won Operation Sail in 1972 and placed third in the same event in 1974.

Due to obsolescence, the ship, which had returned from her last voyage to Kotka in Finland on September 28, 1981, was decommissioned on July 4, 1982 and ceremonially replaced by the new building Dar Młodzieży.

As a museum ship for the public 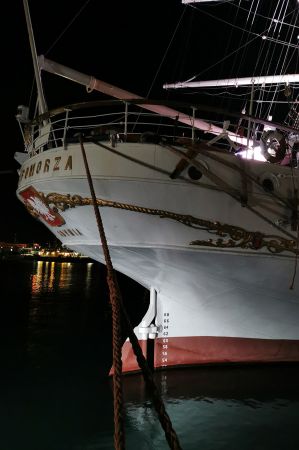 During her time with the Polish merchant fleet, the Dar Pomorza made 102 voyages totaling around half a million nautical miles; while 13,384 students of the shipping school were trained.

Since November 16, 1982, the ship has been on display as a museum ship under the administration of the Polish Maritime Museum in Gdańsk. After its overhaul, the Dar Pomorza opened its doors to visitors on May 28, 1983 in the presidential pool on the southern pier in Gdynia. In October 2009 the ship celebrated its 100th birthday. a "second baptism" was performed by Barbara Szczurek (wife of the Lord Mayor of Gdynia) as godmother.