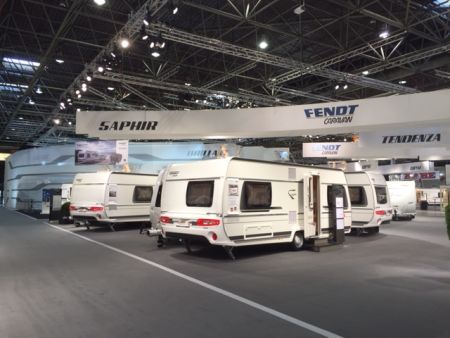 Again, like the years before, we noticed the call of the Caravan Salon 2016 in Dusseldorf going around Europe and the world and it has reached us on the Balkans at our part-time host Alexander and Toni Zampetas from service and accessories trading post in Thessalonica who will make their way to the fair by their own motor home.

And of course our main sponsor, Fendt-Caravan Company from Mertingen, as part of our socio-cultural project "A journey of Intimacy and Culture along the Roman Roads", with their broad variety of vehicles and peripheral innovations in yet so different conception-caravans will for sure be there again, next to 590 other exhibitors present.

At least more than 200,000 m² of exhibition space, a mix of mobile homes, caravans, bold and forward-looking innovations, accessories and special products of mobile campers will be presented. The world's largest exhibition for motor homes and caravans has become much more than just an exhibition of vehicle concepts and new ideas of traveling, because now  guided or partially guided tour and concepts for spending the winter in the south are offered too. Within our project, the creative process of such a concept for the Balkans, Greece with the Peloponnesus, Crete and Cyprus (and who wants, even with an alternative route through Turkey) is nearly finished already offering the South from autumn to spring as a large extent for camping.

How often the discussions in conjunction with a safe route through the Balkans along the Mediterranean Sea or the Danube have been drifted towards "wintering" in the south. Wintering on the Peloponnesus, Crete and Cyprus in Greece (who would like, in Turkey too), with intermediate targets in the Balkans: What initially just looked for an idea for wintering, in the following months developed to a conceptual approach. The journey for wintering should already contain intermediate stations on the Balkans, which offer safe sites, even in winter, longer stays with attractive outdoor offerings. As an alternative to Spain, Tunisia and Sicily!

Years before, the strong demand for places for wintering in warmer climate at the Mediterranean has surprised us. Many campers reported about Sicily, Spain, and even from Morocco and Tunisia. Is it just the lack of known Camper places, it is the journey through previously little-known countries that stopped people from wintering in Greece? Several times we went the tour on the Balkans by caravan, there were never any real problems. We have had a variety of questions before it could come to a first conception.

We now have worked out a route, so that even the journey, despite the distance, can not be too strenuous: at intervals of initially each about 250-550 kilometers, we suggest overnight points with corresponding camper equipment for several days of stay (also in autumn, winter and spring), so that it can be used on-site self-determination for cultural visits or outdoor activities. This leaves the possibility of the visit of cultural sites or events on the way to South, clearances for own ideas are always possible. Corresponding offers for outdoor activities are coordinated with local institutions in the Balkans and in Greece.

In Greece (and Turkey), the Peloponnesus, Crete and Cyprus, we found a few places that also are open for longer stay (in some countries max. 3 months) so that the winter in the southis easy to manage. Any interested person is absolutely free in its time and financial tour planning, places and destinations whereabouts fixed itself.

Here are some other highlights of the Caravan Salon 2016

- More than 2,100 camping vehicles on 200,000m² of exhibition space
- Brands, trends and many world premieres in 12 exhibition halls!
- Many innovations around outdoor and camping equipment!
- Routes and destinations as well as camping and caravan sites in Europe!
- From 2 to 4.9. also see TourNatur: No.1 trade fair for hiking and trekking!

Routes to the South - for long term stay too

A Journey of Intimicy and Culture along the Roman Roads

We have 532 guests and no members online