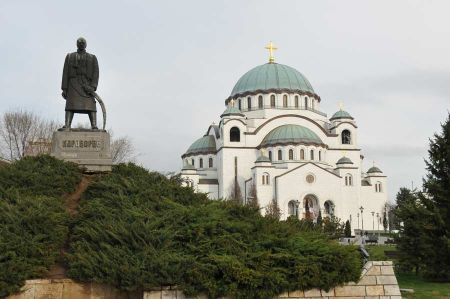 In the continuation of our project work we were going to Belgrade after first meeting with discussions on establishing a Camperstopp in Brunn am Gebirge.

Here in Belgrad we expected a contact and arranged a meeting with some contacts related with the EMITT Tourism Fair from Istanbul. And here we wanted to check about possibilities of extending existing resources as part of tourism routes down the Balkans for regional promotion and development as included in our project.

The territory of the city of Belgrade, located at the confluence of the Sava and Danube was always settled by the respective civilizations of earliest human history, the Neolithic Vinča culture was even named after a suburb of Belgrade. From the 6th to the 4th century BC Thracian and Scythian tribes migrated to the region. Later Celtic and Illyro-Thraco-Celtic tribes came, the Scordisci, that were occupied by Roman, came in 279 BC. The Romans latinized the former name Singidun to Singidunum, which probably meant round fortress or round town.

In the 1st century BC the Romans conquered the territories next to the Danube. Besides Sirmium and Viminacium, Singidunum (Belgrade) was an important strategic point on the Via Militaris and the Danubian limes. By 86 BC and to reinforce the frontiers at Singidunum, Legio IV. Flavia Felix experienced the Roman town with its heyday, even won more importance by the Emperor Hadrian in the appointment as Municipium and later also in the rank of a Colonia by the settlement for veterans.
But more on that later.

We had arrived in Belgrade early in the afternoon, so there was time for a short sightseeing tour and after the cold winter temperatures in Brunn it was almost spring-like temperatures with the first blooms and a few rays of sunshine. Upon arrival already we noticed a monumental church building on a hill, so that our first way almost inevitably led there.

Getting information on site, it said that this church is one of the largest churches in the world. With a seize of 3,255 m² it is nearly approximate to the dimensions of the Hagia Sophia in Istanbul, but has a larger dome diameter (35 m to 31 m) and a larger peak height of the dome (68 m to 56 m). The crypt on a level of 6 m takes an area of ​​1600 m². The three galleries on the first level above the three cross arms of conches have a total area of ​​1.276 m². A maximum of 12,000 people are having space in the church. The inner dome diameter reached 35.15 m, which is slightly larger than that of Hagia Sophia. The four-ton gilded cross of the main dome has a total height of 12 m. The church has 10 bell towers, 4 of which are grouped as domes around the main dome, two to three of the four conches. In all, there are gilded crosses, which were formed in large cross to the default.

However, it concerns with the building that it is not an ancient monument and also the degree of completion still confined to the shell. Perhaps our interest had just woken up because of that. Such a monstrous church building at the present time?
It's definitely, my stand 2016, the largest church in South-Eastern Europe and one of the largest Orthodox churches in the world.

The cathedral is dedicated to the first Serbian archbishop and patron saint of Serbia to the Saint Sava (1175-1236). It was built on the nearby southern Belgrade city center plateau of Vračar, a 134 meter high hill, and thus on the place where Sinan Pasha in 1595 allegedly made to burn the remains of Saint Sava. It was getting always more interesting, the more information we gathered.

The idea to build the memorial church directly on the city hill responds to the 300-year anniversary of the burning of the bones of the first Serbian archbishop, teacher and Holy Savas of Serbia by Ottoman Sinan Pasha at the time suspected as in the year 1895. Mythical traditions and miraculous stories in the folk poetry where the combustion site in retrospect to a sacred and spiritual place. The search for the original location of the pyre was out in Serbia since 1840, when the Savindan (January 27) was introduced as a public holiday in the Principality, and a priest called Mihailo had communicated the information in 1878 that on the Vračar a church has been destroyed by the Turks in 1757.

After the Berlin Congress and the complete independence of the Kingdom of Serbia from the Ottoman Empire the leaders wanted to erect a monument in the religious circles of the request, the founder of the Serbian autocephalous and one of the key variables of the intellectual history of Serbia. As a symbol of medieval Serbian history with its Empire and the cultural size, which was reflected in the many important Serbian Orthodox monasteries, especially the church had to concentrate a lot of interest to the own founding father to his dedicated building.

Saint Sava was felt by the Serbian Orthodox Church as a symbol of unity of living across different countries and territories. Serbs and its cults should be led to a possible unification of all Serbs. During 1895 an association for the construction of the memorial church of Saint Sava by Mihailo and by the inclusion of important citizens of Belgrade was carried out, the idea of a memorial church on the Vračar hill in Belgrade began to take shape.

Today's historically secured dating from the grave of Savas and coronation church of Nemanjić in the monastery Mileševa in the year 1594 destroyed by Sinan Pasha, the former Grand Vizier and important military leader of the Ottoman Empire, show stolen relics and their demonstrative combustion exactly at 27th of April 1594. The immediate cause of the retribution action was the great Serbian uprising in Banat between Timisoara and Pancevo carried out by the Serbian Orthodox Church strongly supported by the Serbian Orthodox Patriarch Jovan (Patriarch 1592-1614), he formed a part of a general Serbian uprising of the Herzegovina and Montenegro and its military center of Banat during the Long Habsburg-Turkish War 1593-1607.

The relic Savas in Mileševa monastery was at the time one of the essential identification figures in Serbian national consciousness, a description of the rich grave scrim of the monastery from 1580. In the sarcophagus Savas described "entirely with silver ornaments and gilded figures" as the Venetian ambassador to the Sublime Porte, Paolo Contarini had given during his stay in Mileševo.

However, after the 2nd World War and the ensuing history of Yugoslavia it should still take many years until the idea of the memorial church Mihailo's could be implemented.

Architect Pešićs revision of the silhouette of the church was finally decisive for the continuation of the work, proceeding out of the ground plan of Nestorović-Deroko Design. He enlarged, next to the height of the dome, the dimensions of the half-domes, changed the facade design, designed a cross for each of the domes and enlarged the cross of the dome from 6 to 12 m. The arcades and pilasters of the windows were changed, the facade was planned rather than from sandstone in white marble, textured bands of arcades of the window arches of red granite, reshaped windows and rosettes. The official further construction was opened in a kind of fair, were published to the Belgrade population of about 100,000 visitors in the still communist Yugoslavia on 12th of May 1985. The actual construction began on April 14, 1986. The work requiring particular numerous static interventions since preparations for the foundations of the four pillars were not sufficiently large for a dome of 35 meters in diameter and the supporting walls of the half-domes from static insufficient proof that bricks were not strong enough.

Monolith has been inserted at all critical points of the foundations and in particular the originally intended single-dome is provided by a double shell construction with a 2 m high gear between the shells. Construction technology innovation were the work on the outside of the 36 m diameter measuring dome. Pešić wanted to build entirely on the ground inside the church. The 4,000-ton and 28 m high dome was then lifted with its 28-ton copper roof and together with the 12 m high gilded cross which weighed already 4 tons by a hydraulic system in 20 days to at least 40 m height. The technically spectacular uplift of the dome through specially for the purpose made 16 hydraulic cranes was accompanied by several television stations, numerous media representatives and architects and civil engineers on 26th of May 1989. A separate stage before the construction was set. On June 25, 1989 under the leadership of Patriarch German first actual liturgy in the church took place, three days before the 600-year anniversary of Kosovo Polje battle at Gazimestan, 150,000 people gathered on the plateau and in the church.

And even if the interior design will take some more years to finish, the shell is absolutely worth seeing.

History Travel in the Capital of Art