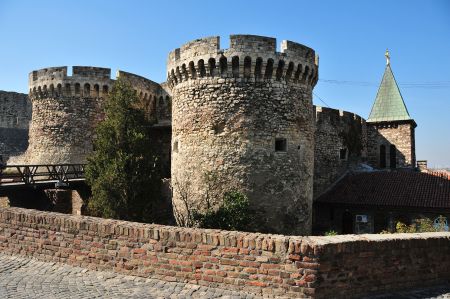 After our extensive city tour through the center of Belgrade in the impressive Cabriolet of Ducan we had agreed to explore the Castle ourselves and then go back to the Camper Stop Station 38 - Camping Center Belgrade.

Of course, we also wanted to determine the exact distance on foot, after we had also pointed out the bus line 35 from the city center back to the camper stop. To anticipate it from the castle back to the camper stop, it is exactly 5.3 kilometers, which have to be completed on partially busy streets. Once again we used the map system of google maps.

The fortress of Belgrade is the climax and the historical core of the Serbian capital Belgrade. It dates back to the beginning of the fifteenth century, but was expanded by modern bastions in the late 17th century and early 18th century.

The central fortress of Belgrade was fiercely contested during the military confrontation about the predominance in Central Eastern Europe between the great powers of the Habsburg monarchy and the Ottoman Empire in the Turkish wars, and was briefly held by Austria in the 17th and 18th centuries. In the course of the First Serbian uprising against the Turks, the Serbs conquered the fortress in 1807, which retained however an Ottoman commander until 1867.

Strategically located on a 50 meter high lime spur above the river delta of the Save into the Danube, the fortress today is also the landmark of the city. Beside ramparts, bastions, towers and gates the numerous monuments as well as two churches and the Military History Museum of Serbia tourist are the main attractions in the complex. In the former ramparts of the fortress the Great and the Small Kalemegdan are arranged as generous parks and the Zoo of Belgrade. The name Kalemegdan is taken from the Turkish "Kale meydanı" and refers to the great free space around the citadel which forms the core of the fortress. The open air was built in the course of the 1880s, when the terrain was transformed into a large park. The first design of this park was made by order of Prince Mihailo Obrenović from the first Belgrade town builder Emilijan Josimović.

The fortress is situated above the mouth of the river Save in the Danube and is divided into the upper town or upper castle lying on the limestone plateau and the lower town or lower castle lying in the Alluvial plain. From the upper town terrace you can see the rivers of the river Save and the Danube, the Great War Island (Veliko ratno ostrovo), and the Belgrade districts of Zemun and Novi Beograd. Towards the north are the flat monolithic lowlands of the Pannonian lowlands. To the south the strongholds of the Šumadija stretches from the fortress. The upper and lower parts are connected by a single gate.

In the medieval heyday at the beginning of the 15th century the residence of the despot Stefan Lazarević was located in the upper town. The suburb accommodated the residential center, the religious institutions with the Franciscan monastery and the Orthodox city cathedral, the Belgrade Mitropolija. A Danube port had existed since the beginning of the fifteenth century, a Save harbor already under King Stefan Uroš II Milutin, who had erected the Save settlement.

The fortress consists of two parts: the upper town, which occupies the plateau of the former Roman Castrum (to which we shall reflect later), Byzantine fortresses and the city of the Despot, as well as the suburbs. The late medieval core of the upper town was fortified in the Baroque to the south and east by bastions. The subdivision is divided into the western part of the town and the artillery bastions in the east, built in the 13th and 14th century by King Stefan Uroš II Milutin on the banks of the river, the suburb of the despot from the beginning of the 15th century.

The once towering upper town changed its appearance particularly in the 17th to the 18th century when the towers designed for blank weapons became obsolete and reinforced bastions were built for guns. The former castle of the despot Stefan Lazarević in the upper town was destroyed during the conquest of Belgrade in 1688.

More details about the castle and the inner city will follow.