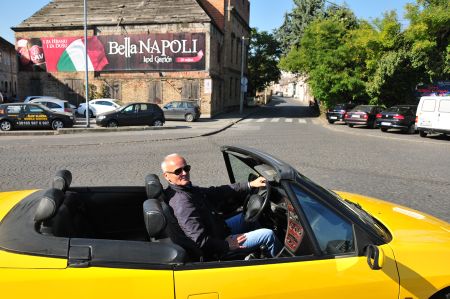 And even if the sign in the background suggests something else, we are actually on the road in Belgrade and in Dusan, the operator of the camper stop in the city centre, we have found a Tour guide, who gives us a first overview to Belgrade in his way, within yellow old-timer convertible, a pleasure for sight-seeing.

Belgrade, often translated with "the white city", from which the ancient name of Greek Weißenburg is derived, is the capital of the Republic of Serbia, divided into ten municipalities and seven suburban communities. Together they form the Okrug Beograd with 1.71 million inhabitants and because of that, Belgrade is one of the largest metropolitan regions in South Eastern Europe.

With its universities, colleges and scientific institutions, Belgrade is the dominant media center in the country, with numerous publishing houses, radio and television stations, as well as daily and monthly newspapers. Belgrade is the seat of the Serbian Orthodox Church and residence of the Serbian Patriarch. The biggest christian church of the Balkan peninsula, the Cathedral of St. Sava, is in Belgrade, we had already added an article online.

Thanks to its location at the mouth of the river Sava to the Danube on the south-eastern edge of the Pannonian Deep Plane and on the northern border of the Balkan Peninsula, the city is a hub for traffic between Central and South Eastern Europe and the Near East. Thats why Belgrade is often referred to as the gateway to the Balkans. The fortress of Belgrade is one of the best kept castles on the Balkans, which is often contested in the history of the Danube. In the vicinity you will find the historic university with observatory and beyond the river (Novi Beograd) the Sava Centar is being built in the years 1977-1979, the largest convention center of all Balkan countries.

Belgrade has a great number of sights from different eras and historical buildings of different cultures, which Dusan explained to us during our tour. The modern development of Belgrade and its role as a capital demanded representative structures, which in the residences of the Serbian rulers, administrative and governmental buildings of democratic governments as well as by the architecture of authoritative socialist rulers also demanded a different topos. The city owes its present appearance predominantly to the urban extensions after the First and especially the Second World War. Only in the Old Town, in the Stari Grad district, as well as in the Fortress of Belgrade, older historical buildings from the Middle Ages and the Turkish era have been preserved.

Young architect, Le Corbusiers, who visited the city in 1910, was very disappointed in the fact that Belgrade was still a small, more oriental than European market with little representative architecture and a harmoniously structured cityscape: "We have freed ourselves from the illusion of it (Belgrade), and it is so final and thorough, since the city is a thousand times less defined than Budapest. We had often painted the gate to the east, a city vibrating with colorful vivacity and it us decorated with cavalry decorated with feathered and painted boots. This is a ridiculous capital, even worse, a disreputable city, dirty and disorganized, but its position is overwhelming." A statement of the past, we can not really keep on any more today.

It was only after the First World War that Belgrade took on modern contours, which have also been modernized through an urban education and training center. The former few to representative buildings of the administration and government have now been designed by internationally experienced architects in a contemporary manner. The residences of the Serbian kings also contrast with the oriental-looking Konak (Konak of the Princess Ljubica and the Konak of the Prince Miloš) of the 19th century. The Konake gave way to the European royal houses worthy of the classicist residences (the Old and New Castle, Royal Castle and Beli dvor), low restaurants (CAFÉ 1823) modern and more luxurious restaurants (Restaurant London, Restaurant Ruski Car [1890] the ground-level buildings (Kosaničev Venac) multi-storey houses (Knez Mihailova ulica).

In the interwar period, Belgrade became a real metropolis, with a juxtaposition of architectural trends of modernity, such as the Bauhaus style (Palata Albanija), Neoclassicism (Skupština) and the pseudo-Byzantine style (Church of Saint Marko). After the Second World War, a historical discontinuity determined the urban planning development. With the end of the monarchy and the takeover of power by the Communists, the architects also orientated themselves to the socialist architectural language. However, the cultural institutions of the country are particularly encouraged, and the numerous theaters and museums are particularly promoted during this period. For the first time, larger sports facilities are being built, and the industrialization of the suburbs by large socialist enterprises and newly established populated districts (Novi Beograd) are changing the cityscape. An obstacle to rapid population growth for urban development after 1945 is the inadequate expansion of transport infrastructure, since no modern capacity-efficient passenger transport system has been established to date.

So it is not surprising that the Dusan route leads us along the relevant buildings of countless epochs, as well as the government seat, various embassies, the former seat of the government at the time of communism, but also the exhibition halls at the Sava, the modern Sava Bridge and the quieter suburb beyond the Sava, which leave a deep impression with us.

If you, dear reader, have the desire to have such a tour through Belgrade, please contact Dusan, who offers a similar tour for his guests at the Belgrade Camping Centre, with the caravan or camper safely staying at the parking space, if desired. Talk to him!