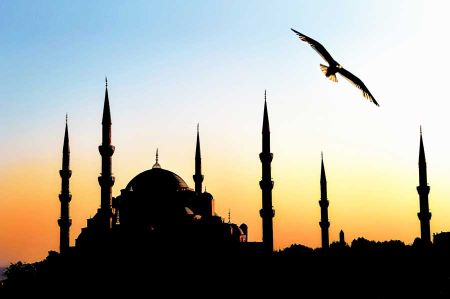 Whenever travelling to Turkey, don´t forget that Turkey belongs to the Eastern European Time zone. In relation to CET (Central European Time), you need to add one hour.

And of course, there is summer time regulation in Turkey as well,  you need to add one hour onto CEST (Central European Summer Time).

The peninsula of Asia Minor, the most western point of the Asian continent, bounded by the Black Sea, the Sea of Marmara, the Aegean Sea and the Mediterranean Sea, is part of the state of the Turkish Republic, founded on 29th October 1923.

The total area of Turkey is about 780000 square kilometres. The part of it regarded as belonging to Europe is just 27000 square kilometers. Known as the eastern area of Thrakia, it is becoming more and more important because of the major town of Istanbul, the only town in the world situated on two continents, and thought of as the gate to Asia Minor or, really, Anatolia.

So we can say that three percent of Turkey belongs to Europe and 97 percent of it belongs to Asia. But the whole country is the meeting point of three continents: Europe, Asia, and Africa. Turkey has borders with Iran, Iraq, Syria, Cyprus, Greece (Aegean and Thrakia), Bulgaria and Romania (just sea borders) and, with a length of more than one thousand kilometres, including sea borders, has the longest borders with the former Soviet Union to the north and east. As Turkey seems to be a never-ending country because of its size, there are lots of differences in climate and landscape.

There are zones of moderate temperatures, Mediterranean landscapes, the Steppes of Asia and zones of alpine/mountain landscapes. The difference in the geographical landscapes and, therefore, the climate makes the differences between the single regions of Turkey even more important. The surface of the country shows a clear character. The European part in the extreme western part of Turkey is formed by the Thrakian high plateau. The Aegean zone in the west is more like a combination of smaller mountainous rocks and valleys. The most important elements to give a complete picture of Turkey are the two chains of mountains along the coasts, the Pontus to the north and the Taurus to the south. These mountain chains sometimes come together in the centre of Turkey but mainly run parallel to the coast lines until their meeting point in the east were they form the high plateau of Central Anatolia. They surround the huge high plateau of Central Anatolia.

Even though you may think of Turkey as a country where nature provides major obstacles to the ideas of humans, we need to say, that, because of its central position between Europe and Asia, Turkey has been one of those places where the history of mankind has taken huge steps because of the influence of former empires as well as because of huge movements in population. Today, Turkey has an almost completely Muslim population of Asian origin, but is also powerfully drawn to the western world. Anatolia has come under the influence of Sumerian, Hethitian, Greek, Roman, Byzantine and Ottoman cultures while, in more recent times, Christianity and Islam have built some of their most important centres here in Turkey.

The Climate in Turkey

The best months for travelling and sightseeing are April, May, September and October. The season for swimming and fun at the beach lasts from May until November. All the beach regions along the Aegean and Mediterranean Seas and the Sea of Marmara exhibit the typical climate of all Mediterranean countries - really hot summers and mild winters. In all other parts of the country, the climate differs totally. We have an alpine climate in the mountains, but also a semi-desert climate in the highlands.

The mild Mediterranean climate of dry summers and huge amounts of rain in the autumn are quite typical for the western and eastern coasts of Turkey but it does have a very positive effect on the Mediterranean plants and especially on the growth of vines, figs, olives, lemons and oranges and also cotton.

In the centre of Anatolia you will find continental climate with little rain but extremely cold winters with huge amounts of snow. In the east there are really hot summers which are responsible for the typical character of the landscape, similar to steppe.

The Black Sea coast has a less extreme, almost Northern European climate. In Istanbul and along the Sea of Marmara, winters are wet and cool, the summers dry and hot. Along the Aegean Sea we find the comfortable Mediterranean climate of mild winters and dry, hot summers which are kept comfortable by the ever-existent winds. The Turkish Riviera is the hottest area of Turkey and because of that is an all-year-round holiday area.

For the actual weather and the forecast, please click here!