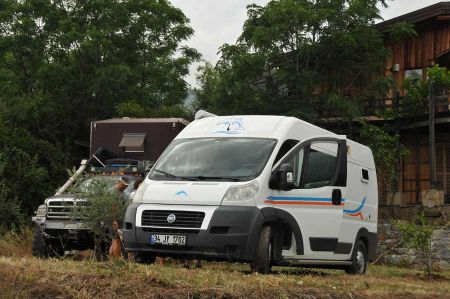 For the traveler initially unfamiliar are the license plates on motor homes and camper vehicles starting with numbers that meet us on the roads so far and increasingly in Western Europe which are reflecting the numbers of the provinces of Turkey.

In Turkey, too, the development of camper and tourist tourism abroad is steadily increasing, so it is no wonder that you meet Turkish travelers on the way. Similar to France, the identification letters of the cities and municipalities are not used as prominent first signs, but the numbers of the provinces of Turkey in alphabetical order. So the numbering begins with 01 for the province of Adana, which is located on the Mediterranean Sea. This number 01 can be found in the first position on all vehicle signs that have been approved in the province of Adana. According to the episode in the alphabet of the province Izmir follows at position 35, a license plate starting with 35 indicates the admission in Izmir.

Similar to some European countries, there is also a small blue box on the left side on registration plates of a more recent date showing the nationality TR. In addition, there are a variety of special signs, some of which are particularly striking in the tourist strongholds eye. Foreigners who have a right of residence or better a residential permission (Ikamet) in Turkey and register a motor vehicle are given a corresponding license number of the province f.e. 07 for Antalya and in the second position is the identifier MA 1 - 999, MB 1 - 999 to MZ 1 - 999. So it is clear from afar that a vehicle is allowed to a foreigner.

Initial registration of the vehicle can be maintained

Unlike in some European countries, the car can also take its mark when changing ownership into another province. Thus, the buyer of a car registered in Ankara 06 (where almost all vehicles are considerably cheaper than at the coast !! Important for anyone interested in the purchase of a car), his registration without re-registration in Antalya 07, the number plate still remains at 06. If you intend to make such a purchase, you should only clarify with your insurance company whether the premiums for vehicles with registration 07 are just as expensive as if they continue to use 06. As in Europe, urban areas are usually a bit more expensive for tax purposes.

For some years, with at first great reluctance taken up by the population, there is also an offshoot of the German TÜV in Turkey. Significantly, the safety on the streets has increased, but still many vehicle are unsuitable for traveling on the highway. However, the TÜV stamp is usually on the front license plate, which leads to heavy wear of the badge due to the sticking insects. Not a really clever solution.

As in other countries, the owner usually associates a particularly strong sense of attachment with his province number. Turkish footballers often use the number of their province as a jersey back number. A small anecdote on the edge says that the Karsiyaka district of Izmir would have applied for the vehicle number 34 1/2, as they do not want to use the number 35 as Izmir. But the request was not granted!