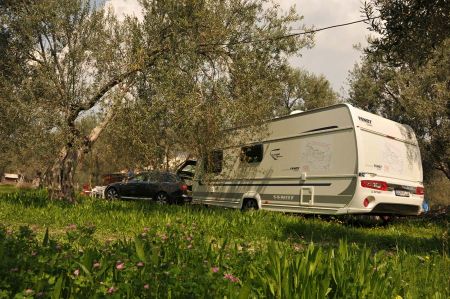 In this rapidly developing technology age; on one hand, humanity destroys the nature, on the other hand, the nature continues to impress the humanity. Some people have been discovering the blessings and the beauty of the nature because nowadays nature means freedom for the humanity.

For those who have to live or work in the metropolitan, the meaning of freedom exactly corresponds to nature. The movement in fresh air, exploring the different geographies and finding out about other cultures give us never ending energy. We use this energy to share our sightseeing and experiences with our readers.

With the support of Goethe-Institute İzmir, our journey under the sponsorship of Fendt-Caravan started by receiving the caravan from our sponsor company that brings it into use throughout the three years. Fendt –Caravan, which has the production area and the headquarters in Bavaria’s Mertingen town, is not only Germany’s, but also Europe’s best caravan manufacturer company and we were glad that they accepted the sponsorship of the project.

In Rain, at the riverside of Lech, there is a market for garden equipment called Dehner Garten-Center. At the entrance of the market, the company presented the latest caravan models, we received the caravan from the exhibition staff and our handover ceremony was amusing. At the third attempt, I decided not to leave the key again and I received the key of Fendt Saphir-Scand model caravan which will be used for our project.

After the ceremony, we returned to Kitzingen and for the journey in the morning, began to furnish our small house which was tied at the rear of our vehicle. I was fascinated by our new small house with incredible details.

The First Stop After Germany: Vienna 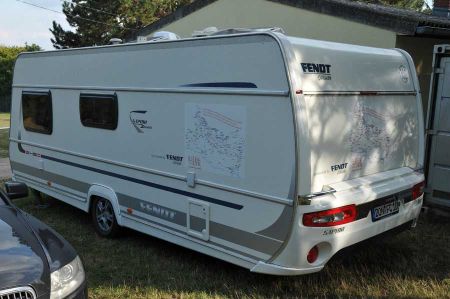 After saying good-bye to Brita, we departed for Vienna, which was established as the population center of the Celts. The camping site, we arrived at with our new mini house is at the west of Vienna. Our first day was not bad at all because we were not just travelling with a vehicle, but also pulling a caravan and we had to get used to its size. Luckily Detlef is an experienced driver for caravan travel and camping, thus, we did not have any difficulty. But, it was a new experience for me that I had difficulty in helping Detlef, because of the size of the caravan.

We were ready to set off after spending two nights in West Wien Camping. On the same day, we arrived in Belgrade over Budapest, but we could not reach the camping site, because the new updates were not installed on the navigation map. Detlef said that he had seen a tent symbol on a motel signboard and we decided to stop over there. When we came to the motel under the high trees, we first thought that there was nobody because tens of crow noises was accompanying to a desolate structure view which looks like Hitchcock movies. The motorized caravan with Holland license plate in front of the motel, gave us hope because it got dark, we were tired, hungry and needed a safe camping site for spending the night.

There was a couple who looked like the owner of the motel and they let us pull the caravan and camp wherever we want. Actually, that was what we understood from their gestures because we do not know Serbian. With the help of Detlef’s sympathetic personality and international speech efforts, we provided electricity to caravan. There was no water, but it was not a problem, we supplied the needs of water that we bought from the market in Vienna. Now, it was time to work. 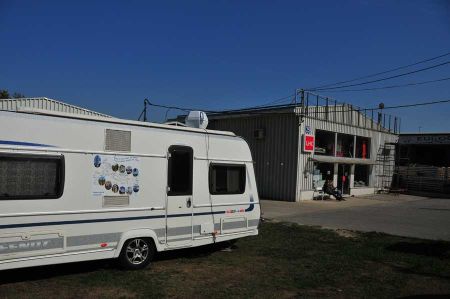 I want to mention a detail that will be very important during our journey:  the internet connection! In Serbia, we were in a motel camping site, almost desolate near the highway, which even did not have water. Of course, having an internet access was improbable, despite this situation, I asked to be certain. We needed internet connection for our daily workings. At this point, our satellite sponsor Ipcopter company stepped in and I want to thank them from the heart. We accessed the internet from anywhere by connecting the satellite, which was installed on the caravan.

After dinner, two hours of working consumed all energy of us and we went to sleep for a fresh morning. I was quite happy that the crows on the tress thought the same thing with us and they went to sleep, too, because I can’t describe the noise they made.

We prepared for the road after a breakfast in the fresh morning. The motel owner did not want to take any accommodation payment, but we left 10 Euros for the electricity we used and continued our journey. Today, we aim to pass Serbia, travel over the lands of Macedonia and move forward to Kavala in Greece.

Ancient Town of Stobi and Excavation Site in Macedonia 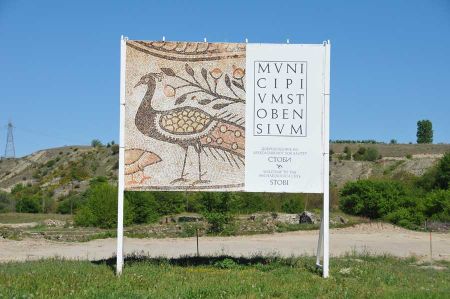 In a beautiful spring weather - even partly summer heat – while we were thinking about giving a break for lunch, we noticed the signboard that we saw on our previous pass. It was an excavation site and antique city signboard that we did not stop at the time, forgot the name of the area and did not research.

Here is that signboard, the Ancient town of Stobi!

After parking our vehicle to the antique town entrance, we had a snack, then, headed for the ticket office with the cameras. From the lady at the office, we learnt that excavations will start soon and she promised us for providing a guide for our next visit. The findings remain from the iron age that carries the tracks of the late Hellenistic, early and late Rome were recovered in the city.

We had a chance to visit only the theater in the antique town which is located at joining point of Vardar and Cyna rivers. I have to say that, even the theater ruins which have been coming to the light so far, are quite impressive.

Stobi is at the crossing point of Via Egnatia and Via Militaris roads that contributed to the cultural improvement of the antique world in the heart of Macedonia, where is the point that Aegean and Balcanic worlds come together.

We had to continue our way, so, we could not visit the other ruins of the town and we said good-bye to the officers for seeing each other again at the end of the May.

Border between Greece and Turkey 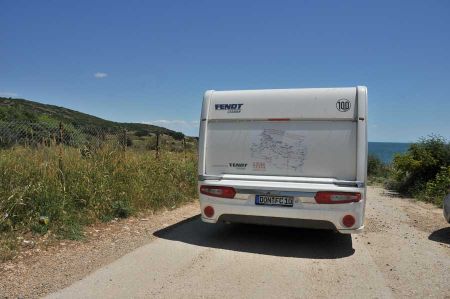 We were in Greece after leaving Stobi 200km away and again after 200km we left Thessaloniki back and came to the next accommodation place, Kavala. The only camping site here is located in the Aegean seaside, south-west of the city center. It was not easy to move off with a big caravan in the entrance and narrow camping site. The camping site did not come into the season and still there was a kind of modification. Although there was nobody at the reception, we parked in the site where we supplied electricity and water. The camping site was not ready for the season, however, there was water for shower, toilet and dishes that we washed our dishes and were refreshed by a shower. After dinner, by making use of the satellite that Ipcopter satellite presented to us, we connected to the internet.

Each time, exit from the Greece and the entrance to the Ipsala-Turkey is an interesting experience for me and I feel sad. First, the exit of the Greek customs, then, the border bridge that splits two countries and is kept watch by the soldiers who have different uniforms and nationalities, but same communions, then Turkey border gate and customs officer who says “Welcome, Mr. Detlef”. 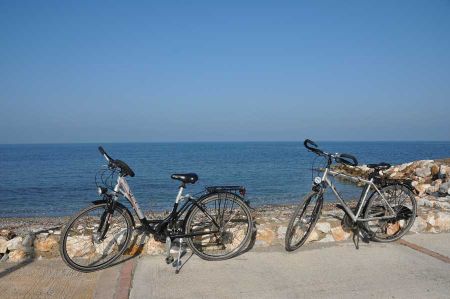 After entries were completed, we came to Küçükkuyu by ferry over The Dardanelles Strait. We arrived at a camping site which I found on the internet and confirmed on the phone one hour early. Oba Camping was not open for the season, but they accepted us with pleasure and served us hot tea. We were not sure if it was the hot tea or the intimate welcome of Oba Camping that warm us inside.  Located on the seaside of Küçükkuyu, among the olive trees and under the foothills of Mount Ida, Oba Camping presents an alternative holiday to the visitors. I realized that camping in this beautiful geography is a different lifestyle for the people who want to spare some time to discover history and nature. Between the magical trees in the huge garden of our mini house, we had a peaceful sleep that night.

The next morning, since we did not have to hurry, we stayed at the camping site until the afternoon. We had to prepare for our presentation at the 60th anniversary celebration of Goethe-Institute İzmir on Friday. Our independence from working life, does not mean that we do not work.

In this beautiful spring day, we had lunch under the shadows of olive trees, then, we were on the road again for İzmir. At evening,  we arrived in Oba Way Station camping site for accommodation in İzmir. The camping life, which is the most important extent of the nomad lifestyle, accords with the name of “Oba”. Located on the coastline of the Güzelbahçe district of İzmir, there is a quite old management that has a water park, hotel and market inside.  We stopped over in a suitable place with our caravan, our neighbor Duygu at the opposite caravan helped us and gave information about our needs.

We did not come to the last stop yet, but it is a joyous experience reaching an important stop on the journey.  I believe that our next journeys will be adventurous and we will continue to share our joyous adventures.

We are on the road with our caravan, building bridges between the cultures.