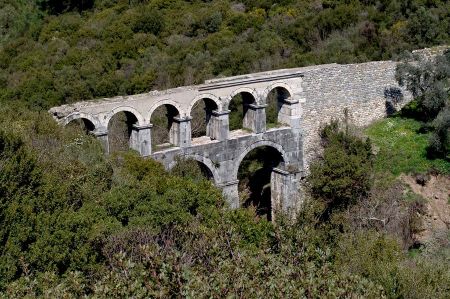 To supply the metropolis of Ephesus with fresh water, the Romans built another aqueduct system in the mountains between 7 and 15 AD, which also contained an aqueduct over the Dervenddere River that is still well preserved today.

The watercourse, called Marnas in ancient times, had to be bridged with the help of an aqueduct consisting of two floors, with three large arches spanning the river valley in the lower area and six more arches on the second floor carrying the actual waterway.

As was often the case in the Roman Empire, it was mostly private donors who contributed to the construction of such charitable facilities. This is also the case on the Selçuk aqueduct, where large, well-preserved inscriptions on both sides of the building refer to the sponsors of this project: the family of Sextilius Pollio together with his wife Offilia Bassa and son-in-law C. Offilius Proculus. Accordingly, the aqueduct on the Marnas River is also known as the Pollio Aqueduct. Interestingly, the two-line inscription is in both languages, Greek below and Latin above. Furthermore, the inscription states that this construction was carried out in honor of Augustus, Tiberius and the people of Ephesus.

Pollio Aqueduct of outstanding importance to deliver water to Ephesus 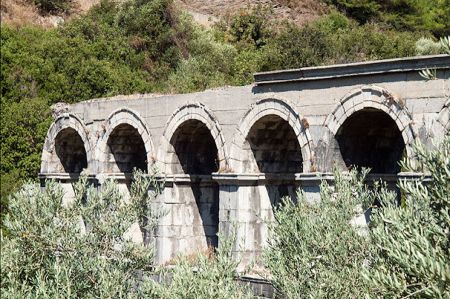 Under Emperor Augustus, work was being carried out in parallel on a large number of construction sites in the region steeped in history between Ephesus, Tralleis (modern Aydin) and Magnesia. However, the Pollio aqueduct is of outstanding importance as part of the Aqua Throessitica aqueduct, since it was urgently needed to supply water to the expanding city of Ephesus. It is not that huge like the aqueduct Pont du Gard in Southern France next to Nimes, but really impressive too.

Even today, the river, now called Dervenddere, flows under the eastern arch of the aqueduct, the ancient road used the middle and western arches, which were slightly larger, to pass through. The inscriptions on the arches also indicate this.

Architect and historian Vitruvius describes the construction of an aqueduct 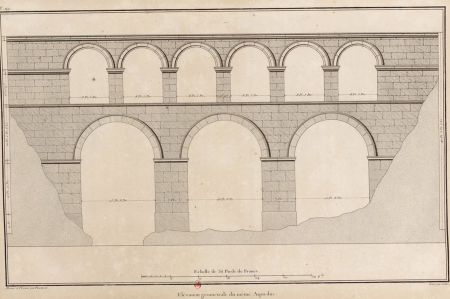 The foundation stones and arches are made of roughly hewn stone, while the jambs and cornices have very finely finished surfaces. Countless inscriptions can also still be seen on the architraves of the arches. The end plates above the watercourse even have decorations like those on an attic. Parts of the walls are lined with brick and mortar in neat rows.

As early as the first century BC, the architect and historian Vitruvius describes the construction of an aqueduct in great detail, almost comparable to a modern building arrangement, starting with the subsoil investigations, the measurements, the careful selection of the building materials and the construction work to avoid problems and practical maintenance. Since the builders usually followed these instructions strictly, it is not so surprising that we can still find and marvel at some of these imposing utility buildings today. Whether we do this in Selcuk at the Pollio aqueduct, at the Pont du Gard in southern France or at the aqueduct in Segovia in Spain is up to us. One can just admire the technical planning and execution that has endured for thousands of years.