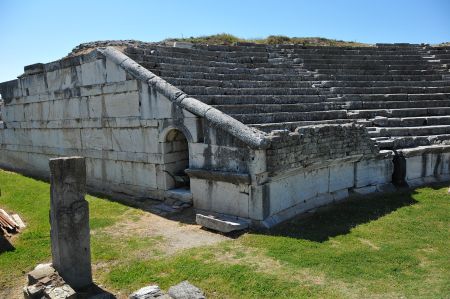 For a number of years, close contacts with the Stobi archaeological site in Macedonia have been established, especially with the group of archaeologists and conservators and their extensive work in the ancient ruins of Stobi, with its impressive basilica and the impressive theater.

Stobi, the main town of the ancient landscape Paionien, is more than a really interesting stopover on the Balkan route to the south. Located directly next to the highway Belgrade - Skopje - Thessalonica, the huge excavation grounds of the different ancient periods with the really excellent preserved mosaics also offers a small cafe as well as toilets, so there is the option for overnight on the site with the necessary basic equipment of fresh water and toilet facilities. Combine your visit to the excavations at the location for your overnight stay while traveling to the South.

Due to its interesting position in the estuary at the river Erigon to the Vadar and the position on a main route which connected the middle Danube to the coast of the Aegean Sea, Stobi was later conquered by the Macedonians and then, together with Macedonians in the 2nd century BC, under the rule of the Romans. The ruins of Stobi are today the most important remains in the territory of the Republic of Macedonia. The huge gravel site is located just north of the Macedonian A1 motorway, which is also called Autoput Bratstvo i jedinstvo, south of Gradsko. The excavation site and the restored buildings today form a really interesting open-air museum of archeology.

Since the Neolithic period, the settlement had been populated several times, because it was situated in a very favorable area for agriculture and in a north-south connection important for the Balkan trade. The flat terrain, however, offered just few possibilities for the fortification of the place. Originally, the populated area was barely 2.5 hectares. That the Paionier made Stobi their capital in the 5th century - before this was the Bylazora further north - contributed to the flourishing of the city.

Philip II conquered Paionien about 350 BC and divided the country into his realm. However, there was a limited dependency, because in Stobi, there have also been Paionic kings, who ruled as Philip's governors. In the fourth and third centuries, the population of Stobi was already largely Hellenized.

After the victory of the Romans about Macedonia in 167 BC, the Roman province of Macedonia, to which Stobi belonged, was formed in 148 BC. The city played no significant role in the administrative organization of the Romans. In the city, however, several Roman roads, intersections of Via Egnatia and Via Militaris crossed each other. The city developed well and the population grew strongly, as can be seen in the multiple expansion of the built-up area. In 69 AD the city was given the status of a municipium. From this time some mintings of the municipium Stobensium are known.

We had already announced our present visit in the run-up to the part-guided camper-cultural trip through Albania, Macedonia and Greece, and so one of the archaeologists welcomed us to the archaeologists' accommodation shortly after our arrival, introduced a brief overview of the excavation site and the special options of Stobi in particular.

Understandably, campers were enthusiastic about the so-called personal discoveries in the grounds, which gave a deep insight view  into the history of the settlement and the city. It is also very interesting to see the Jewish churches, which were already at an early stage, parallel to other religious cultures.

Excavation and Conservation works in Stobi in Macedonia