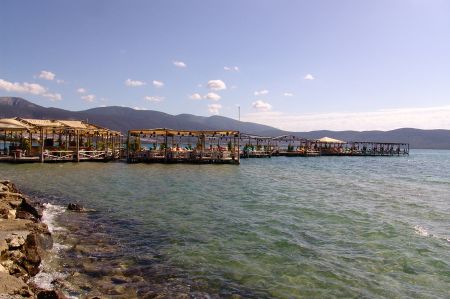 Akbük is a place with a beautiful bay and surrounded by protected forests and olive groves. Located on the south west coast of the Aegean Region, approximately 19km from the lively resort of Altınkum, 65km from Kuşadası and about 70km from the Bodrum Airport.

If you would like to go to the Akbuk district there are local minibuses that leave from Altınkum and the Didim city centre.

Akbük is preferred by those that want to live in a quiet area of Didim compared to the busier holiday resort of Altınkum. Akbük is also known for its high oxygen ratio and humidity rate in Turkey. Its climate is helpful for people suffering from health problems such as asthma.

Akbük became a township in 1991 and is developing more and more every year. Most of the infrastructure, which includes new roads, and pedestrian walkways have been completed. Future developments of Akbük include a golf course and a direct road leading to Bodrum. No major construction is allowed between the months of May-October. Beside this factor, buildings are to be built no higher than 2 ½ floors which mean the natural beauties of Akbük will not be changed by high and short buildings covering each others views.

Clean roads, beautiful and very calm beaches welcome you to Akbük as it is an ideal resort for those who love quiet times alongside water sports. Weekends are the busiest time for Akbük shores similar to Altınkum. Early in the morning or late at night amateur fishermen trying to catch biggest sea bass or sea brim on the shores of Akbük. "Cupra" is a delicious kind of fish. 400 - 500 gr. each approximately. "Sarıyanak kefal" is another type mullet fish to be tried. Both you can grill or fry with olive oil. Sometimes fishermen are coming from a long journey to catch fish here. There are fish farms located on the south west direction of Akbük Bay which are bringing very good income for Turkeys economy. Total length of the beach is 11 kilometers for Akbük. Amateur fishermen especially go near to fish farms. Just in case if there no fish, they can buy from the outlets of some fish farms.

The beautiful combination of Akbük's breathtaking views, soft sandy beaches and the very well known hospitality of Turkish locals; makes it a place that people prefer to move to or spend their holidays at. During your visit to Akbük, the chapel on the coast line close to the town center is very well preserved and can be visited since it is open to the public. There are big holiday resorts, 3 star hotels and also one 4 star hotel, along with one resort for French tour operators rated at 5 stars; There are also small pensions, motels available during the summer season. Restaurants by the sea serve delicious fish and local food that should not be missed, which all can be had at reasonable prices. There are many shopping centers and restaurants with local and foreign cuisine available in the area.

Apollon Temple of Didyma and Asylum