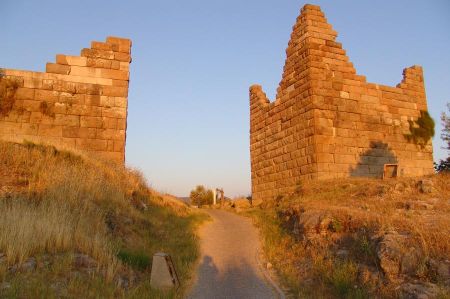 There is hardly any place around Bodrum (formerly called Halicarnassus) in which you will not find at least the foundations of a temple or the remnants of an ancient settlement. If you look at lot of the known names of Greek scientists, artists and scientists, you need to learn, that lot of them lived in today's Turkey.

Herodotus, Thales, Praxiteles and how they all were called, lived their time either in or close to Bodrum. Even Themistocles spent his last years in the near of Magnesia.

Bodrum is mainly famous for its legendary mausoleum, a tomb, the wife of the Persian satrap of Caria King Mausolus II., Artemisia erected during his lifetime already. The huge mausoleum was considered to be one of the Seven Wonders of the World, listed in Herodotus list. According to the ancient building, similar monuments are called "mausoleums" until today. It was probably destroyed by an earthquake in the 14th century; remains of the building were used in the Johanniter Castle St. Peter in Bodrum. Some of the sculptures were taken to the British Museum in London. Two original pieces of the Amazon frieze are in the museum, which is located on the former site of the mausoleum.

The museum was built with the financial and scientific assistance of Prof. Dr. Kristian Jeppesen from the Danish University of Aarhus and opened to visitors in 1982. Thanks to him excavations were carried out under his direction between 1966-72, important archaeological findings could be taken.
In the roofed part of the museum all finds of Mausolos and concerned finds of his time, ordered by scientific evidence, are issued. In semi-open part there is a plaster cast to see as a copy of the British Museum Amazon frieze. Also the architectural findings are issued.

About 10 years later, the company Turkcell and Erikson were working on a project for the conservation of ancient treasures of Bodrum. Included in this project were the 7 kilometer-long city walls of Bodrum, the Myndos Gate and the Ottoman tower west of the port of Bodrum. The first phase of the project began on 15 July 1998 with archaeological excavations and cleaning around North and South Towers of Myndos gate. During the excavations many stone blocks were found, they were labeled and stored for future placements. 6 graves from the Roman period were discovered and the architectural plans of the area were drawn. The trenches, which had played an important role in the fight against the siege of Alexander the Great were marked and taken under protection.

The Gateway of Myndos has two monumental towers, one of which has survived until the present day almost in its original form, measuring 7 by 8.5 metres. The Myndos Gate, locally called “Dikduru”, is located to the west of the city. It was one of the entrances to the ancient City of Halicarnassus.

The tomb with 19 vaulted chambers has been restored. There are mosaics depicting vine leaves and birds. The moat has a width of 7 metres and its depth varies between 2 and 2.5 metres. It stretches to the east for 35 metres then turns south for 19 metres and ends with a last stretch of 22 metres. Because of the moat it was difficult for Alexander the Great to conquer Myndos. However, after the successful conquest and destruction of the city by him, Myndos would never be the same.