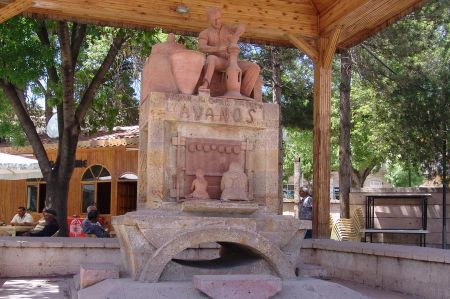 First of all, we stopped by Avanos, which is Cappadocia’s handicrafts and pottery center, for lunch. This is an underground rock restaurant. Although when I looked from the outside I did not like it, dining hall of the restaurant was authentic and attractive. The residences that carved by damp-proof white rock are common in this region.

After eating white bean stew with pastrami and delicious pottery kebab, we freshened up and went out  to discover Avanos.

Located 18 km north of Nevşehir, name of Avanos in the ancient period is Venessa. In this region, summers are hot and dry, winter are cold and rainy. In this district, there is a great deal of pottery workshops that the tradition of ceramics continues from the time of the Hittites. The red soil of Kızılırmak and the ceramic clay are shaped in the hands of ceramic artists in Avanos.

Today, we were in a pottery workshop, which is a branch of art that descends from father to son.

It is known that earthenware has been done in Avanos since Hittites. This branch of art has survived until today by descending from clan to clan, father to son. According to the rumors, it is told that people do not give a girl in marriage to the man that does not know the pottery.  Soft and oil-based clay lump from the mountains of Avanos and old watercourses of Kızılırmak are sifted and by kneading properly, the mixture turns into mud. Spinning by foot, mud on the bench, which is called as wheel, shape is given and intended pot gets ready.  In the workshops, pots are primarily sun-dried, then dried in the shadow and baked in the furnaces that fired by sawdust starting from 800 to 1200 degrees heat.

Rose Valley - next to Ürgüp in Cappadocia