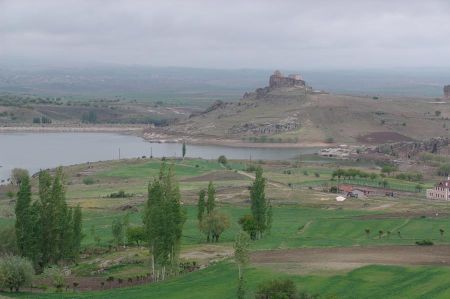 When you talk about the great rivers of Turkey, you immediately think of the two great rivers, the Euphrates and Tigris. However, both rivers leave Turkish territory again after relatively short stretches.

With its 1,355 kilometers, the Kızılırmak is the longest of the rivers that flow over Turkish territory alone.

The source of the Kızılırmak is located high in the eastern Anatolian hinterland about 120 kilometers east of Sivas in the vicinity of the mountains Kızıl Dağ and Kumanlı Dağ, the former also contributing to the naming in two ways: firstly, in the same naming of river and mountain and secondly with the color term kızıl for red, because the mineral, iron-containing clay material of the mountains also discolors the river water red.

Course of the river through central Anatolia 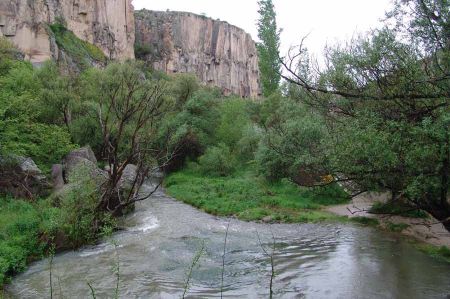 In the first part of the river course, it goes continuously, albeit in loops, in a west-southwest direction through central Anatolia. The Kızılırmak then changes its flow direction in a wide arc, which was already referred to in antiquity as Halys Arch, to the north and crosses the modern Hirfanli reservoir before it cuts through the Pontic Mountains. A little later, the Kızılırmak also flows through the Altınkaya reservoir. Both reservoirs are used to generate electricity and provide local water. To the northwest of Samsun, the Kızılırmak flows into the Black Sea with a wide delta. As far as Bafra in the north, a huge wetland biotope was able to develop over thousands of years, which is known today as a particularly protected wetland with extensive bird breeding and wintering areas.

The river was already so important among the Hittites that it was mentioned in records with the name Marassanta. The name changed to Halys in antiquity, which is probably due to the relatively high salinity of the river water, which comes from the Greek word Halys means "salty river". Again and again, there were disputes between the various ancient peoples along the river, for whom the course of the Kızılırmak was a natural boundary. In the 6th century BC the river formed the western border of the Mederreich. The ambiguous saying of the oracle of Delphi to the Lydian king Croesus that he would "destroy a great empire" when crossing the Halys, refers to the function of the river as a border between the Lydians and the Persians, who followed the Medes in contemporary history: Croesus finally destroyed his own empire, when he fought against Cyrus II in 547 BC, with which Cyrus was able to expand the Persian empire to the Aegean Sea.

Bafra - Roman city foundation at the mouth of the Kızılırmak

A little later, the Romans built a first city at the mouth of the Kızılırmak, which is now called Bafra, far from the sea. The increasing deforestation along the river resulted in severe soil erosion even before Christ, which then silted up the river delta. This is how today's huge delta was created in a few centuries, with the river mouth being relocated about 15 kilometers further out into the sea. A wetland area similar in size to that of Kızılırmak was created when the Great Menderes River silted up in the Aegean Sea.

Due to its seasonally very different water levels with extensive sandbanks, rapids and shallows, the Kızılırmak has never been usable as a waterway in the sense of shipping. Until the beginning of the 19th century, however, Bafra could still be reached by ship from the sea.