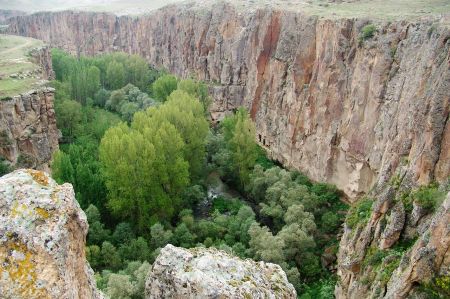 Coming from Güzelyurt (Province of Aksaray) we stop at the parking lot of the Ihlara Valley (Ihlara Vadisi), which is known for its numerous rock-cut churches, which is cleverly framed by several restaurants at the entrance area.

Already on the way down into the valley you can hardly avoid the restaurant advertisers, but without the intrusiveness it shows in comparison with the Riviera coast. We don't let ourselves be distracted and start with the descent of the more than 400 steps into the Ihlara valley, which is about 15 kilometers long and up to 150 meters deep, which was dug by the Melendiz River in prehistoric times.

In the Ihlara Valley, which is also known as the Peristrema Valley and is one of the main attractions of Cappadocia, there are around 50 rock-hewn churches and cave structures, which have been driven into the rocks to the right and left along the Melendiz Su, which is now a stream. In the 7th century Byzantine monks discovered the valley between the towns of Ihlara and Selime as their settlement area and began to dig caves in the soft tuff, which were then expanded for housing purposes and for use as churches. The soft tufa was once created by eruptions of the nearby Hasan Dağı, a volcanic mountain, and due to its nature offered relatively easy, simple expansion in the rock. The old name Peristrema can be traced back to the former predominantly Greek inhabitants of the place, now called Belisarma, located halfway between Ihlara and Selime.

Once you have made the descent into the valley, it is wonderful to hike along the course of the stream and enjoy the almost untouched nature in the valley. Suddenly the environment is completely different, calm and natural, the hectic rush at the restaurants is quickly forgotten. After a short walk you come across the first dwellings and churches, the frescoes of which have unfortunately been destroyed all too often. In their destructive rage, stupid people who were blind and furious were always aiming for the eyes in particular.

First you come across caves and churches whose frescoes differ significantly from those in the churches that you come across on the further course of the tour. Churches built around Ihlara mostly show eastern influences from Persia and Syria in the frescoes, which were later often painted over. The background to this overpainting was the so-called Byzantine Pictorial Controversy, which took place in the 8th and 9th centuries to fierce theological debates between the then predominant Orthodox Catholic Church and the Byzantine imperial family. While one party wanted to reduce the belief in icons (iconoclasts - icon destroyers) in the churches, the other group tried to achieve the exact opposite (iconodules - icon worshipers). Why these disputes came about is still controversial to this day. Whether Islamic influence already played a role here, whether it was the influence of the Second Commandment or just the influence of the Byzantine emperor - we will probably never find out.

What is certain today is only the outcome of the dispute, which the iconodules won and which led to many traces and documents of the iconoclasts being removed or destroyed.

To give just a few examples, we find the “Church under the Tree” (Ağaçaltı Kilisesi) from the 7th century, which was carved into the rock in the shape of a cross and whose dome depicts a scene of the “Ascension”. The type of representation shows pre-iconoclastic representations that have survived the period of the pictorial dispute. We also get to the “Snake Church (Yılanlı Kilise), another cross-domed church, which is painted with scenes of hell in the vestibule (Narthes) and probably dates from the 9th century. The representation of four naked sinners surrounded by snake-like monsters probably provided the name. We then come across the “Hyacinth Church” (Sümbüllü Kilise) from the 10th century, in which clear transitions to the Byzantine style can already be seen. Here you can see the Emperor Constantine next to his wife Helena in the frescoes.

Byzantine Emperor Basil IIdonated one of the churches

The further we penetrate into the valley in the direction of Belisarma, the clearer the handwriting of the Byzantine influence of the 10th and 11th centuries becomes, which can be seen in particular in the three-aisled cross-domed church, which is called "Pillar Church" (Direkli Kilise). Portraits of saints adorn the four high pillars that support the vault. Allegedly, the Byzantine Emperor Basil II (976-1025) donated this church building, as can be seen from inscriptions found in the Ihlara Valley. A little further on one comes across the ruins of the cross-domed church "Church with the Black Breach" (Karagedik Kilisi) from the 11th century, whose 4 pillars are still well preserved but whose paintings have been almost completely destroyed. This church was once built from bricks and trachyte blocks, so it was not hammered into the rock.

On the basis of found inscriptions, the "Church under 40 Roofs", which is also called St. George's Church (in Turkish Kırkdamaltı Kilisi), can be assigned to the years from 1283 to 1295. Until the revival of the church building by the Greeks living here at the beginning of the 19th century, the St-Georgs-Kirche was the last Christian church building in the Ihlara valley. The fresco paintings that can still be clearly seen bear witness to the peaceful coexistence of Muslims and Christians at that time, because next to Saint George, the Byzantine consul Basileos Giagupes can also be seen in Seljuk costume with his wife Thamar, who was also an emir in the region. Inscriptions mention the Seljuk Sultan Musud II and the Byzantine Emperor Andronikes II right next to each other.

With a multitude of impressions we hike back through the valley to the entrance stairs and this time the already waiting entertainer of the restaurant is successful. After these many impressions, it is almost a must to end the day with a view of the Ihlara Valley.

The Formation of Cappadocia