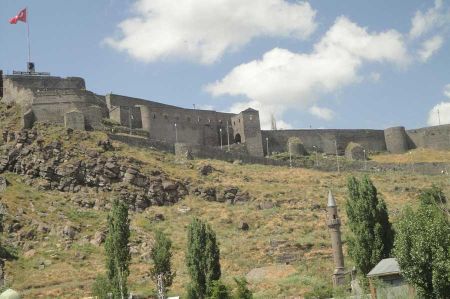 In the north-east of Turkey you will find a province called Kars whose capital is a town of the same name. It is the administrative centre for about 90.000 inhabitants. Because it is only 45 kilometres to the Armenian border and about 65 kilometres to the border of Georgia,

many soldiers are on duty in the town.

Kars is about 1760 metres above sea level.

The Citadel of Kars

The Castle of Kars (Turkish: Kars Kalesi) is a former fortification located in Kars. It is also known under the name Iç Kale ("Central/Inner Castle", "Citadel").
It was built in 1153 probably by Bagratid Armenians. The outer walls surrounding the city were built in the 12th century. The castle, which was destroyed by Timur in 1386, was rebuilt again in 1579 by Lala Mustafa Pasha, who came to Kars ordered by the Ottoman Sultan Murat III.
It is said in the Ottoman sources that the castle was rebuilt with the help of one hundred thousand soldiers and workers. In 1606, the castle was destroyed by the Iranian Shah Abbas I, and in 1616 and in 1636 it was restored twice and new elements were added to it. The castle was hugely damaged after the occupation of the Russians after the Ottoman-Russian War of 1877-1878, and partially changed after 40 years of occupation. The walls of the Castle of Kars were made of basalt masonry, a very difficult material to work on (Thanks to Sabri76 - Own work for the picture CC BY-SA 3.0).

The castle consisted of two sections, the internal and the external castles. The external walls were made of five layers. In addition, there were deep trenches made in front of it. The main castle looks to the east. The planning of the walls of the external castle is not quite quadrangle. The length of the castle's perimeter makes 3,500 m (11,500 ft), it was supported with 22 watchtowers, of which only seven remained intact until today.
The length of the internal castle makes 250 m (820 ft) in the east-west direction, and about 90 m (300 ft) in the north-south direction. The castle has four gates. The "Su Kapısı" (literally: Water Gate) or "Çeribaşı Kapısı" is situated in the west, "Kagizman Kapısı" orta "Orta Kapı" in the south and "Behram Kapı" in the east. The main gate located in the north opens up to a chasm in front of the castle.
The castle's watchtower can be accessed by climbing the stairs or along the stone paved road.
Just inside the main entrance is a shrine containing the tomb of Jelal Baba who died during the Mongolian invasion in 1239. Within the castle are military lodgings, an ammunition depot, and a small mosque that was rebuilt in the 1990s.

Kars and the surrounding areas were then conquered by the Ottomans in 1514.

The citadel, built in 1152, was strong enough through the following centuries to withstand sieges by the Persian Nadir Schah (1731) and the Russian troops (1807). Much later, on 23rd of June 1828, the town had to accept that the war had been lost and it needed to surrender. The Russian general, Field Marshal Iwan Paskewitsch won the battle for the town and about 11.000 soldiers were imprisoned. Later, during the next war, better known as the Crimean War, the town again had to surrender because of serious illnesses like cholera and the lack of enough food. This led to its capitulation in November 1855. During the Turkish - Russian War of 1877 / 78, the fortress was conquered again during the Battle of Kars was later ceded to the Russians after the peace congress of San Stefano.

As a meeting point of Armenian, Georgian, Greek, Russian and Turkish culture, the town combines a huge number of architectural designs.

Kars Kalesi was first constructed in 1152 by the Seldjuks, destroyed in 1386 by Tamerlan and in 1579 was rebuilt on the plateau high above the town by Sultan Murad III and again by Lala Mustafa Pasa. The existing structure dates from 1855. At the bottom of the plateau you will find the former Cathedral of Kars, the "Church of the Apostle (in Armenian "Surb Arakéloc")", which was built between 932 and 937 by the King of Bagratides, Abas I.

We have 248 guests and no members online