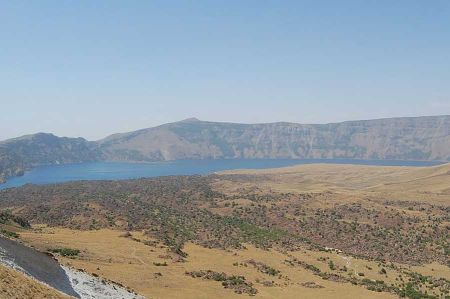 Mount Nemrut near Tatvan in the province of Bitlis is very often and easily confused with the mountain of the same name in the province of Adiyaman, which houses the famous lion horoscope and the statues of the gods erected by King Antiochus.

Mount Nemrut near Tatvan, not far from Lake Van, on the other hand, is a volcano that was last active in 1881 and was about 3,000 meters high, with the information varying between 2,865 and 3,300 meters depending on the source. Due to the predominantly Kurdish population in the region, the Kurdish name of Nemrut is also called Çiyayê Nemrud, although it cannot be proven that the naming is based on the legendary King Nimrod.

Geological investigations of Nemrut have revealed that there have been numerous eruptions during the most recent Holocene geological epoch. The last observed lava eruption was in 1441, the last well-documented explosive eruption was in 1650. Always active due to the movements of the tectonic plates between the Arabian and Eurasian plates, eruptions are still possible. At the moment, however, the region is relatively quiet.

Craters of this type are also known as calderas 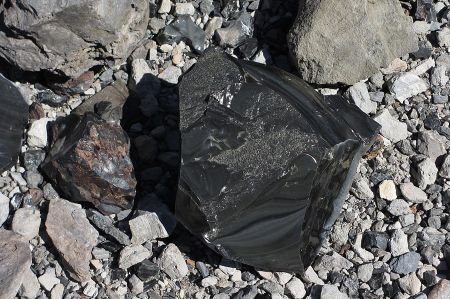 One of these explosions in the Holocene is also responsible for the current shape of the volcanic mountain Nemrut, because the entire summit collapsed after the complete emptying of a huge magma chamber underneath, so that an immense crater basin of about 7 kilometers in diameter was able to develop. Craters of this type are also known as calderas. Over the years, the Nemrut caldera has filled up with a lake about 155 meters deep, made up of meltwater and rainwater, which is now one of the largest crater lakes in the world. Amazingly, there are two other lakes in the crater named Küçükgöl and Ilıgöl, with Ilıgöl being a warm-water lake about 500 meters in diameter with a water depth of 7-8 meters. Hot water and steam springs are located directly on the edges of the lake, which heat the lake water up to 80°.

Due to the hot underground, even the actually cold crater lake rarely freezes over. So today it is possible to take interesting photographs, which show the snow-covered mountain landscape of the area, especially from the air, from which the brownish edge of the caldera stands out in strong colour. The lava flow can also be clearly seen on the snow picture, which later moved into the caldera after it collapsed.

Vessels were made from obsidian 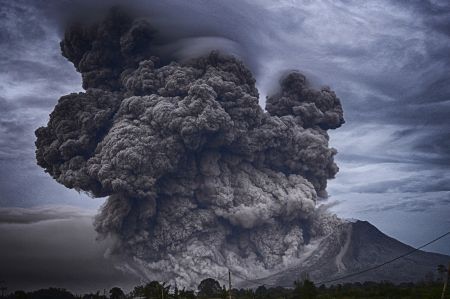 Examination of the lava flow shows a mixture of thin, once-liquid basalt and thick obsidian, a volcanic black glassy material. Already in the Neolithic, Mount Nemrut was known for this material and it was traded as far north as Mesopotamia and the southern Levant. Today, obsidian is found on the southern and eastern slopes of the mountain, with smaller amounts also on the northeastern slopes. Due to its sharp-edged fracture and its glass-like structure, obsidian was often used as a material for the construction of tools. At the time of the Hittites, vessels were made from obsidian, while in ancient Rome polished obsidian was used as a mirror.

It's a bit spooky when you move down the gravel road into the crater. Our local guide quickly calmed us down so that we could confine ourselves to taking pictures. Anyone who is good on foot can reach the south-eastern edge of the crater from Tatvan in about 5 hours, which then allows a great view into the crater, onto the crater lake and, if there are no clouds, to Lake Van. In the season between June and September there are some guided tours that allow safe climbing.

Today, itinerant herders use the slopes of Nemrut for grazing, pitching their tents in the caldera by the lake and spending the summers up here. With the onset of autumn, it then descends again over the pass from Bitlis into the Tigris Valley and on to Diyarbakir or Jesireh.

A handicraft jewel on the Halterbach in Vienna