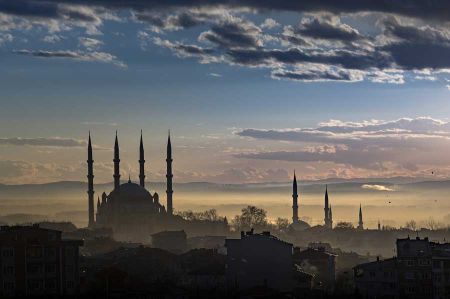 Many buildings were built by Sinan, the master builder, during the Ottoman Empire, but his “masterpiece”, as he had seen it, is the Selimiye Mosque in Edirne (Edirne Selimiye Camii).

At the height of Ottoman architecture, by order of Sultan Selim II, Sinan succeeded in building an outstanding building with this mosque, and not just because of its dimensions. The Selimiye Mosque was built between 1568 and 1575, a relatively short construction period, if you consider the complexity of the building.

The main dome, which rests on only eight massive supporting structures, has a diameter of 31.28 meters, making it one of the most powerful dome structures in the world. The height of this dome is an impressive 43.28 meters. The pulpit built in the mosque is made of marble and together with the wall and floor tiles, these furnishings have made the Selimiye Mosque so famous. The minarets can be reached via separate stairways, each has three aisles and is 71 meters high. The buildings belonging to the overall complex of the mosque complex were also built by the master builder Sinan.

Unfortunately, some of the original tiles are still missing today, because during the Russian occupation of Edirne in 1878, some of the tiles were stolen as spoils of war and transported to Russia. To date, it has not been possible to agree on a return.

We have 397 guests and no members online