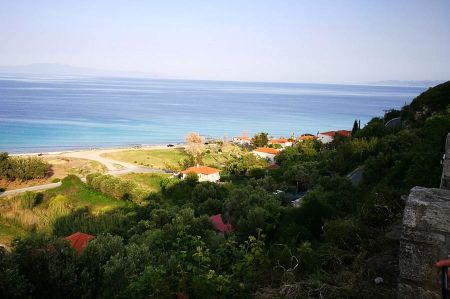 In search of a bakery, which offers the delicious Kourambie cakes all year round, we had found Gkemitzis in Afytos during the internet research, who ran a small eco-shop and invited us to his home village.

So only a few short messages via what´s up were necessary to extend our Sithonia tour to Kassandra. 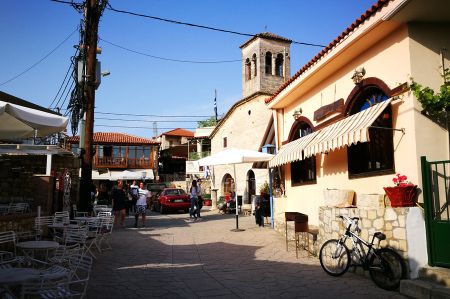 Afytos is located just off the main road leading south on the east coast of Kassandra. Afytos, also Athytos, is located 75 kilometers southeast of Thessalonica and 45 kilometers from the capital of Chalkidiki, Poligyros. The roads to Afytos are however not particularly well signposted. You have to look a little to get the right exit. As you are reaching Afytos the roads becomes ever more narrow, in the place itself it is very narrow because in many cases the streets become one-way streets or pedestrian areas. In addition, there is a lot of traffic. Many excursionists want to visit Afytos and also the buses are not afraid to enter the narrow place. So we had also got into the pedestrian areas against better knowledge. It was, at all, not a problem with the southern calmness. 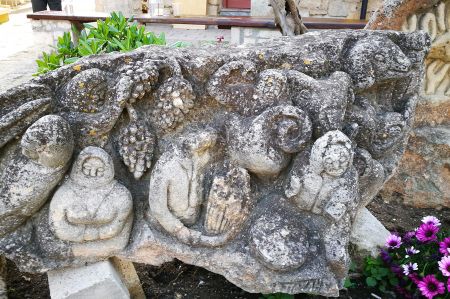 The worthwhile place of interest is the place itself, because from Afytos is a magnificent view on the bay of Kassandra, which is also called Toronian Bay. The narrow streets of ancient Greek architecture, with typical stone houses and the steep cliffs, which offer magnificent views to the north and south. There is also the beautiful beach, where you can relax in the sun and spend nice days. You should have time to explore the village. Not only in the center there is much to see, even if you get something outside, there is much to discover.

Many shops offer much more than tourist bells and whistles 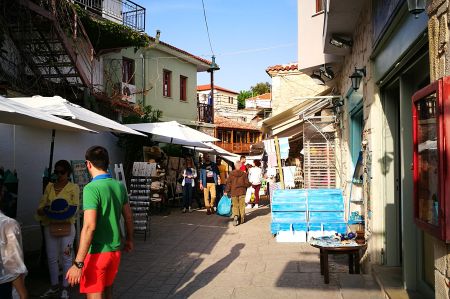 There are numerous restaurants in the streets in the center of Afytos. On the one hand simple, but good Greek cuisine is offered, but there are also the fast food restaurants, which are everywhere in Chalkidiki. Pizza is always on offer. You will not find the big fast food chains. In the center of Afytos there are numerous shops, but all are tailored to the needs of the tourists.

Above the steep coast lies the beautiful village center with its tavernas and shops. Here you can stroll around and enjoy the time off. But you should not forget to take a stroll through the outer districts too, which have a wonderful, untouched flair for tourists. The beach of Afytos can be reached by a road or stairs. It invites to swim and just enjoy the sun rays. On foot, however, it is quite strenuous from the mountain down and up again.

On the square you will find the church of Agios Dimitrios, built in 1857. In the village there is an ethnographic museum, which was founded in the years 1980 and where artifacts from the past centuries are exhibited. Each year on August 15, the village is a great party line in honor of the Mother of God Mary. Afytos has a rich history, since 3,000 years there are settlements. It once even had its own coin on which the head of Zeus was depicted. Here the king of Sparta, Agisilaos, died in 361 BC.

Aphytis sent fleet against the Persians 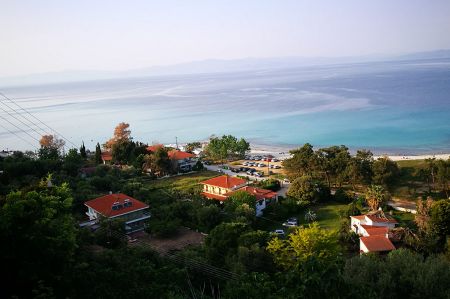 The ancient Aphytis was an important town that belonged to Pallene. Their fleet took part in the Persian wars. However, the city lost its importance again and was first mentioned in the 14th century. During the Greek war of independence many revolutionaries came from the village, including Triantafyllos Garoufallou, Georgios Panagiotou and Anastassios Kiriazis.

Notable are also the springs of Vrisitsa and Moudounou, but the most popular tourist attractions are the white sandy beaches in the village, as well as the ones of Moudounou, Varkes and Liosi. Next to the beaches there are other nice restaurants, pizzerias, beach bars and cafes.

Agios Pavlos - The S. Pauls springs next to Neos Marmaras
Olynth - once the political centre of Halkidiki